Whenever a time of crisis erupts, more than ever, there is a pressing need for individuals to take a stand, and to do so courageously. And unless you are blind, deaf, and dumb, you would know that we are certainly living in a time of overwhelming crisis.

The whole Western world seems to be going up in flames – not just London. Each new day we find plenty of headlines illustrating how a moral, spiritual, cultural and ideological crisis is upon us. But the only question is, in the light of all this, what will good men and women do?

How will we respond? Will we simply cover our eyes and pretend all this is not happening? Will we hope someone else makes a stand on our behalf? Will we deceive ourselves into buying the PC line that just getting along and not rocking the boat is the best option?

Or will we stand and fight? In my eyes the last option is our only option. The next question is, do we have the courage to stand up and be counted? Now is the day we desperately need men and women of courage – those who will not wilt under pressure or give up out of fear.

Of interest is the list offered in the book of Revelation telling us who will not inherit Christ and his Kingdom. Leading the list are the fearful, or the cowardly (Rev 21:8). Those lacking in courage will in effect deny their Lord in the time of battle.

The tragic truth is, there is a cosmic battle going on right now, and lives are being lost, families are being destroyed, nations are crumbling, and hope is being taken away. Yet we sit by and do nothing and say nothing. But even the smallest things that we can do might be of help, yet we seem too fearful or incapacitated to do even these things. 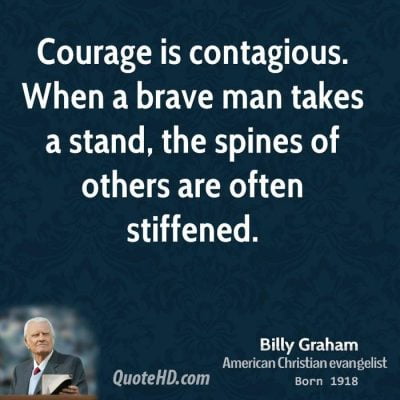 What about taking 1.3 seconds of your time to press the ‘like’ button on Facebook when someone has posted a biblical quote or a helpful Christian word? It can be that easy and simple, and it may encourage another brother to keep on in the battle.

I often get people telling me they are discouraged and tired of all these struggles. They want to give up. They are discouraged. They think we are not getting anywhere. My usual reply to them is something like this: “If we ever find that Jesus has given up, has quit the race, has become too discouraged to continue, then we can do the same. But I don’t see this anywhere in Scripture.”

The truth is, Jesus drank the cup to the bitter end. He kept going all the way to the cruel cross – for me and for you. He loved us too much to want to drop out or to just live a quiet and peaceful life. He did not insist on his own rights, but gave them all up, so that we might live.

I sometimes get people writing to me, asking if I can remove their comments from my site which they posted in the past. Some have discovered that they are now public property – being monitored and checked up on in cyberspace. I reply by saying that unless there is a very good reason for this, I am not too keen. Why are they asking me to do this? Is it just fear, or not wanting to make enemies, cause trouble, rock the boat, etc?

Some say they have privacy concerns, etc. But I am not impressed with those reasons either. Sorry, but when we come to Christ, we lose our right to privacy. We also lose our right to a life of ease, comfort, luxury and security. In fact, we lose all our rights. We are no longer our own – we are bought with a price.

When we become a disciple of Christ, we give up all claims to living a selfish, comfortable and easy life. Quite the opposite. As Bonhoeffer rightly said, “When Christ calls a man, he bids him come and die.” Dead people have no rights – it is that simple.

Of course no one prefers living a life of ostracism, scorn and rejection. But that is what Jesus did, and he told us that the servant is not above the master. To follow Christ means we also will be rejected, ridiculed, hated and persecuted. And that is certainly not fun.

Does anyone really think I like all the flak, opposition, abuse, and persecution I get on a regular basis? Do I really thrive on all the hate mail and death threats? It would of course be so very easy to avoid all of this. I could simply stop what I am doing and say nothing: a guarantee to a quiet and peaceful life.

In fact, I can do what some “Christians” are now doing, and call God a liar. I can argue that what God calls a sin is not in fact a sin. I can say instead that something like homosexuality is God’s gift to mankind, and that to be compassionate and loving, I should instead promote and advocate for this lifestyle. I can even argue that Jesus would favour same-sex marriage.

That would be the easy path. Indeed, that would make me the flavour of the month. I would become terribly popular, and even the MSM would give me lots of praise and approval. Yet as Alan Sears has just written, “It doesn’t take courage to ride the wave of support for same-sex ‘marriage.’ It takes courage to stand against the surging tide.”

Quite so. To stand up for God’s standards of holiness and righteousness in the public arena on any topic is to take a courageous stance. If you want to be at rest and have everyone applaud you, then simply go with the flow, and stand up for abortion rights, pornography rights, homosexual rights, and other trendy secular left causes.

Such a stance requires courage. But the good news is, it is not a question of us mustering up some courage on our own. God provides it. He enables and empowers us. We cannot do it ourselves. I am probably full of fear most of the time. But as George S. Patton has reminded us, “Courage is fear holding on a minute longer”.

A.A. Hodge once put it this way: “It is easier to find a score of men wise enough to discover the truth than to find one intrepid enough, in the face of opposition, to stand up for it.” But men of courage will inspire others. As Billy Graham said, “Courage is contagious. When a brave man takes a stand, the spines of others are often stiffened.”

Remember what Paul wrote in 2 Timothy 1:7: “For God has not given us a spirit of fear and timidity, but of power, love, and self-discipline.” And if that is not enough (although it should be), let me finish with some words of fiction which I often turn back to. They come from the film version of The Lord of the Rings. Aragorn is mustering the troops to stand against an army of orcs much greater and more numerous that they, and he encourages the troops with these words:

“I see in your eyes the same fear that would take the heart of me! A day may come, when the courage of men fails, when we forsake our friends and break all bonds of Fellowship, but it is not this day! An hour of wolves and shattered shields when the age of men comes crashing down! But it is not this day! This day we fight! By all that you hold dear on this good earth, I bid you, stand, men of the West!”

In these days of unprecedented evil, Christ is looking for men and women of courage. Will you be one of them?

32 Replies to “Wanted: Men and Women of Courage”