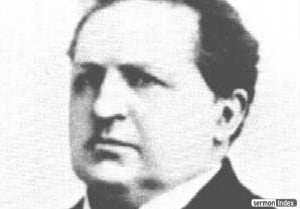 Although known as a champion of neo-Calvinism, he did not start out that way. He was a pastor’s son, and homeschooled, but his university days saw him embracing theological liberalism and rationalism. But a life-long reverence for Scripture, along with various divine encounters along the way, helped him to shake free of modernism and become a stalwart for evangelical Calvinism.

He was a pastor at several churches before moving in a political direction. To further his political concerns he became involved in journalism. He became editor of a Christian weekly, De Heraut (The Herald) and founded his own paper, De Standaard (The Standard) in 1872. This paper became the voice for the political group he associated with, the Anti-Revolutionary Party.

He entered parliament in 1874 and served in the lower house until 1877. He was leader of the ARP, and at the same time considered establishing a Christian University. So in 1880 he founded the Vrije Universiteit (Free University) of Amsterdam.

In spite of his busy work schedule as a university professor, journalist, and politician, he spent a lot of time in theological and religious writing. In 1893-1894 his three-volume Encyclopedia of Sacred Theology appeared. He also wrote many other important theological, political and devotional books.

For example, he managed to write a 1300-page platform of the ARP called Our Program. He also wrote a three-volume work in the 1890s called Common Grace. And his 700-page volume The Work of the Holy Spirit is still available today.

In 1898 he visited the United States where he delivered his now famous Stone Lectures on Calvinism at Princeton University. Those six lectures really helped spread his worldview into the larger Western world. In 1894 he was re-elected to Parliament, and he served as Prime Minister of the Netherlands from 1901 to 1905, and died at age 83 in 1920.

One of his major intellectual contributions was his concept of “sphere sovereignty”. Instead of seeing rights as coming from the state, or from autonomous individuals, he believed we should support the “intermediate bodies” (later called mediating structures) in society, such as the family, church, school, clubs, the press, business and industry, the arts, etc.

Each of these should have their own sphere of sovereignty, to keep in check the powers of the state. He taught that God was the ultimate sovereign and source of authority, but he allowed these other various spheres to make life possible in a fallen world. In what is today sometimes called principled pluralism, he argued, for example, for equal state funding of all religious schools.

As a Calvinist he believed that Christianity was an all-encompassing worldview which should influence every aspect of life. He felt that Christianity was not to be a privatised affair, or just concerned about “spiritual” matters, but something that impacts all areas of life, for the glory of God.

He wrote this statement at the 25th anniversary of his editorship of The Standard: “One desire has been the ruling passion of my life. One high motive has acted like a spur upon my mind and soul. And sooner than that I should seek escape from the sacred necessity that is laid upon me, let the breath of life fail me. It is this: That in spite of all worldly opposition, God’s holy ordinances shall be established again in the home, in the school and in the State for the good of the people; to carve as it were into the conscience of the nation the ordinances of the Lord, to which Bible and Creation bear witness, until the nation pays homage again to him.”

As he famously said at the inaugural convocation of the Free University, commenting on Psalm 24:1 (The earth is the Lord’s, and everything in it, the world, and all who live in it): “In the total expanse of human life there is not a single square inch of which Christ, who alone is sovereign, does not declare, ‘That is mine!’.”

In the same vein he also said, “The curse should no longer rest upon the world itself, but upon that which is sinful in it, and instead of monastic flight from the world the duty is now emphasized of serving God in the world, in every position in life.”

And again, “Christianity conceals in its womb a much greater treasure of rejuvenation than you surmise. Until now it has exerted its power only on the individual and only indirectly on the state. But anyone who, as believer or as unbeliever, has been able to spy out its secret dynamic, must grant that Christianity can exert a wonderful organizing power on society also; and not till this power breaks through will the religion of the cross shine before the whole world in all the depths of its conception and in all the wealth of the blessings which it brings.”

Richard Mouw comments, “When God saves us, [Kuyper] insisted, he incorporates us into a community, the people of God. And this community, in turn, is called to serve God’s goals in the larger world. In the life of the church we worship a sovereign God, but that God then commands us to be active witnesses in our daily lives to God’s sovereign rule over all things.

“For Kuyper, every Christian is called to be an agent of the Kingdom of Jesus Christ, wherever they are called by God to serve. The system of thought that Kuyper developed was an elaborate spelling out of how we are to understand this call to Kingdom service.”

He was not just a thinker but a doer, as should be evident from what I have written above. And he was certainly a fighter. He also famously said: “When principles that run against your deepest convictions begin to win the day, then battle is your calling, and peace has become sin; you must, at the price of dearest peace, lay your convictions bare before friend and enemy, with all the fire of your faith.”

And his devotional love for Christ matched his intellectual and theological mind: “He is your friend who pushes you nearer to God.” His influence has been widely felt, with such men as Herman Dooyeweerd, Cornelius Van Til, Francis Schaeffer, Alvin Plantinga, Nicholas Wolterstorff, Albert M. Wolters, Chuck Colson, and Richard Mouw all indebted to his life and thought.

One of the first English-speaking biographers of Kuyper, Frank Vanden Berg, said this about the man and his legacy: “Because Kuyper always had the national outlook and a profound concern for the spiritual foundations of the national life, he ceaselessly appealed to the nation’s moral and intellectual convictions. The battling and the building of the years altered the face of Netherlands’ politics and to a significant degree the life of his nation. The impact of his career is still discernible everywhere. In Holland’s Parthenon he has his own unique, secure niche. Eliminate Kuyper and you cannot understand Netherlands’ history of about the last eighty years.”