Let me begin with a mini-sermon, free of charge. It is imperative that all Christians think biblically. That is, they should assess and judge everything through the biblical worldview. Sadly most Christians don’t do this. Indeed, many don’t even know what the biblical story is.

We need to know our faith and know it well, and then we need to analyse and interpret everything from that light. What we read, watch, hear – all needs to come under the lens of the biblical worldview. So the songs we listen to, the books we read, and the movies we watch, all need to be assessed from a biblical vantage point.

I say all this because I am just back from watching a movie with my wife. And as always, my mind is thinking how this ties in with the biblical picture. In this case it was not too hard, since the author of the book from which the film is based was a Christian.

So we saw The Hobbit: The Desolation of Smaug. One of the main things that went through my mind as I watched this (and as I read and watch the other Hobbit and LOTR books and films) was the biblical truth that we are in a war, and this is a very serious business indeed.

The books and films always remind me that in such battles we need to persevere over the long haul. As this film again made clear, the path to the final defeat of evil is beset with many obstacles, setbacks, disappointments, detours, enemies, and trials. 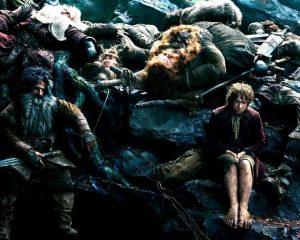 That of course is just like the biblical storyline. Having just read Genesis again over the past few days it is the same picture we encounter. Just as soon as God seems to be making some progress with his people, there is all sorts of opposition, resistance and blockages.

You know the story: Adam and Eve blow it almost immediately; soon enough the earth gets so corrupt that God has to wipe out the riff-raff with a flood; he calls Abraham to father a great nation, except he and his wife are old and infertile; it turns out all the three patriarchs are infertile (at least the wives); Joseph gets betrayed by his own brothers; then he is forgotten in a lousy prison; etc.

Talk about one setback and obstacle after another. It just does not look like God’s plans are ever going to come to fruition. And it gets even worse in the rest of the Old Testament: God’s people end up slaves in Egypt; their exodus is almost stymied at the Red Sea; the wilderness wanderings interrupt things; Canaan proves to be tough; the people rebel time and time again; etc.

Things settle a bit with David and Solomon and the united kingdom, only to fall apart again; sin and apostasy lead to exile; then four hundred years of silence. It does not look like God’s promises are panning out very well here. But Messiah does come, and he does sort things out.

But of course that is just part one of a two-part operation. Until he comes again he has asked us to do the fighting. He won the victory at Calvary, but we are still in a huge war. We are his foot soldiers in a mopping-up operation to retake enemy territory.

We have a major job on our hands, and every single one of us is needed in this lengthy and costly war. And just as in the film and book, the good guys and heroes keep getting sidetracked, waylaid, attacked, captured, betrayed, lost, and even killed. Sometimes they turn over to the dark side.

So too with the church: believers fall away, give up, wimp out, complain, desert ship, end up becoming traitors, refuse to fight, throw hissy fits, seek to tell the Commander-in-Chief what to do, and so on. We are a miserable rag-tag army of losers, whiners and deadbeats.

Yet for some incredible reason God chooses to use us. Indeed, he has no one else but his own people to get the job done. It is mind-boggling when you think about it. He deigns and stoops to use fallen, rebellious, imperfect and spoiled rotten people like you and me to serve him, represent him, and fight his battles on his behalf.

This journey is not for wimps and evangellyfish. We need men and women with some backbone who are willing to stand up and be counted. We need some heroes. We need some warriors. We need some brave soldiers for the Kingdom.

Yet our churches are full of whining weenies and delicate baby believers who have never known a moment of warfare, sacrifice and hardship. Indeed, they have been told all their lives from the pulpits that coming to Christ is all about how they can become a “better you” and have a problem-free existence, and get really rich and have lots of fun.

There was only one person on the planet who had the right and the justification to pull out if he wanted. But he did not. For your sake and mine he went all the way, through all the pain, agony, suffering, rejection, hatred and violence. He went all the way to the cross for us.

How dare we think we can do any less in return? We have no rights in this war. When we came to Christ we gave up all of our rights. We came to receive our marching orders, and do what we are told to do. He is the boss. He is the master. We are but servants.

So please, if you have not yet read the books or seen the films, go do so. Then think about your Christian life. Are you in the battle? Are you on the front lines? Are you engaged in the conflict? Or are you hiding somewhere, or just sitting around with your feet up, living the good life?

My friends, we are in a war. None of us have the luxury of sitting this one out, or sitting on the fence. We either enter into the battle ahead of us, or we might as well admit that we are really part of the other side. The choice is ours. But we sure can use some brave soldiers right now.

I sure hope so.

8 Replies to “Hobbits, Dwarves, Elves and the Biblical Storyline”