It is quite easy to say that the West is doomed. And for good reason – it may well indeed be the case, for all sorts of reasons. Rampant secularism, growing statism and welfarism, political correctness running amok, the increasing Islamisation of so much of the West – these are all major contributing factors in the decline of the West.

Speaking of the West’s rejection of Christianity and its acceptance of relativistic secularism, Alexander Solzhenitsyn in his important 1983 Templeton Address said that “Men Have Forgotten God”. There he bewailed the failure of the West to learn the lessons of his own homeland, Russia, and the horrible secularist revolution which took place there:

“I have spent well-nigh fifty years working on the history of our Revolution; in the process I have read hundreds of books, collected hundreds of personal testimonies, and have already contributed eight volumes of my own toward the effort of clearing away the rubble left by that upheaval. But if I were asked today to formulate as concisely as possible the main cause of the ruinous Revolution that swallowed up some sixty million of our people, I could not put it more accurately than to repeat: Men have forgotten God; that’s why all this has happened.” 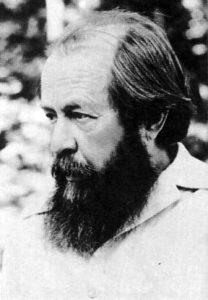 He continues: “The social theories that promised so much have demonstrated their bankruptcy, leaving us at a dead end. The free people of the West could reasonably have been expected to realize that they are beset by numerous freely nurtured falsehoods, and not to allow lies to be foisted upon them so easily. All attempts to find a way out of the plight of today’s world are fruitless unless we redirect our consciousness, in repentance, to the Creator of all: without this, no exit will be illumined, and we shall seek it in vain.

“The resources we have set aside for ourselves are too impoverished for the task. We must first recognize the horror perpetrated not by some outside force, not by class or national enemies, but within each of us individually, and within every society. This is especially true of a free and highly developed society, for here in particular we have surely brought everything upon ourselves, of our own free will. We ourselves, in our daily unthinking selfishness, are pulling tight that noose.”

While all of the West can be described thusly, nowhere is this more true than in Europe. Because God has been booted out big time, the vacuum cannot long remain. And one of the results of this has been that Islam is now especially attempting to fill the void, and that alone is enough to spell the death of Europe.

All over Europe we see Islam on the rise and Christianity on the decline. Many European nations have actually deliberately aided and abetted this process, and they are now reaping the whirlwind. However, a few nations are beginning to wake up – and hopefully it is not too late.

Various nations such as Holland and Germany have begun to rethink their disastrous multiculturalism policies, which have played such a big role in allowing Islam to slowly but steadily take over. Other countries are going even further than this.

Consider the case of Norway. In September of last year the conservative, anti-Islamist Progress Party won 16 per cent of the vote in the general election, enough to bring it into a coalition government with the Conservative Party. Since then the new government has been clamping down on immigration and other areas.

I recently wrote about Norway’s agriculture minister Sylvi Listhaug of the Progress Party who has “called on the country’s prisons, hospitals and nursery schools to serve more pork, claiming that the meat is being pulled off the menu to avoid offending the country’s Muslim minority.” She said, “We cannot stop serving pork because Muslims have moved to Norway.”

Consider some other recent moves. In a determined effort to reduce crime, large numbers of foreigners are being deported, many of whom are Muslim. As one report states, “Record number of foreigners deported. Record number of foreign citizens were deported from Norway last year, after country’s police stepped up the use of deportation as a way of fighting crime. Some 5,198 foreign citizens were expelled from the country in 2013, an increase of 31 percent since 2012, when 3,958 people were deported.

“’It is the highest number we’ve had ever,’ Frode Forfang, head of the Directorate of Immigration (UDI), told NRK. ‘We believe that one reason for the increase is that the police have become more conscious of using deportation as a tool to fight crime.’

And other areas are also being targeted. Consider what the deputy mayor of Kristiansand has done. Jørgen Kristiansen, is being blasted for daring to post a picture of a model of a 12-week foetus in the palm of a hand. He wants to draw attention to what the abortion debate is really all about.

“This is what a 12-week-old foetus looks like,” Kristiansen wrote beneath the picture. “It gives me at least a basis for reflection when the country is standing in the middle of a discussion on doctor’s reservation rights. The picture is from National Geographic and shows a child that is 5.5 centimetres long, with eyes, ears, fingers and everything else a child has when it is 12 weeks old.”

Well, here is one nation beginning to wake up to the threat of Islam, cracking down on immigration, and even – for some at least – daring to broach the abortion debate. Of course political changes alone will not save a nation. But it is a good start.

For the rest, we need to once more revert to the warnings and the advice of Solzhenitsyn. He is worth citing again as I close:

“Our life consists not in the pursuit of material success but in the quest for worthy spiritual growth. Our entire earthly existence is but a transitional stage in the movement toward something higher, and we must not stumble and fall, nor must we linger fruitlessly on one rung of the ladder. Material laws alone do not explain our life or give it direction.

“The laws of physics and physiology will never reveal the indisputable manner in which the Creator constantly, day in and day out, participates in the life of each of us, unfailingly granting us the energy of existence; when this assistance leaves us, we die. And in the life of our entire planet, the Divine Spirit surely moves with no less force: this we must grasp in our dark and terrible hour.”

12 Replies to “Reclaiming the West – One Nation at a Time”