Back in 1980 American sociologist Robert Nisbet wrote an important volume entitled History of the Idea of Progress. In it he examined how the notion of progress has had a long historical pedigree, with Christianity and other worldviews offering their own versions of it.

In an essay published a year before his book, he offered a summary of his thoughts. In it he said, “There is a dark side to the idea, manifest in the writings of those, on the one hand, who celebrated political power as the magic key to human salvation on earth and, on the other, who linked progress with some given race, usually ‘Nordic,’ ‘Teutonic,’ or ‘Anglo-Saxon’.”

He continued: “To summarize and to reiterate: the idea of progress as we have known it for two and a half millennia in the West is hydraheaded. It may mean, as it meant to the Greeks and Romans, no more than advance of the arts and sciences, with consequent boons to human welfare. It may mean a Christian march to a final perfect millennium on this earth and then eternal bliss in heaven. It may mean the constant increase in knowledge, in free institutions, and in creativity, as it did to the Founding Fathers and their kindred spirits in England and France. But it may also mean the relentless enhancement of the political state, the ever-more intrusive role of the state—and its military and police—into our individual lives, or the equally relentless ascent to domination of the world by a given race.” 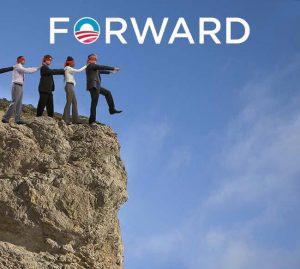 It is the somewhat more recent understanding of the term that I wish to discuss here: the use of the notion of progress by the political left. Again, it is about those “who celebrated political power as the magic key to human salvation on earth” and “the relentless enhancement of the political state, the ever-more intrusive role of the state.”

Bear in mind that Cultural Marxists and leftists in the West now prefer to call themselves “progressives”. Recall the famous symbol of Obama’s political campaign: “Forward”. The idea is always that change is needed, that things as they are are not good enough, and we must progress – with the state leading the way – to bring in some hoped-for utopia.

In this sense the idea of progress is anathema to the conservative and the Christian worldview. Christians of course believe that no human or social perfection can be obtained in this fallen world, and are rightly wary of those who think they can bring their utopia to earth aside from the Second Coming of Christ.

And conservatives of course seek to conserve. Their guiding principle is “better the devil you know than the devil you don’t know”. They are rightly suspicious of attempts at social change which may simply make existing problems even worse.

Prudence characterises the conservative and Christian worldview, since both recognise our fallenness and our inability to bring heaven to earth without the actual inhabitant of heaven. But I have made these points elsewhere, for example: https://billmuehlenberg.com/2010/08/24/what-is-conservatism/

As I said there: “While change has its place, and there is nothing virtuous about absolutely maintaining the status quo, history tells us one thing quite clearly: radical changes usually result in much worse outcomes. However bad things may have been in the older regimes, the revolutions which have toppled them have generally resulted in much worse scenarios. The French and Russian Revolutions are classic cases in point. Indeed, add the sexual revolution of the sixties as another prime example.”

A recent piece by William Sullivan, “The Persistent Problem with Progress-Pushers,” continues to make the case for caution here, and to warn us to be suspicious of those pushing the progress agenda. He too notes that progress, in and of itself, can be a good thing.

But the danger especially comes about when vague notions of progress are tied to ambitious political power: “Progress, as a political platform, is an entirely subjective, malleable concept that is shaped by singular ideologies, the pursuit of which requires that knowledge be narrowed, information be censored, and the education efforts of the state be focused to pursue a desired path and a desired end.”

He looks at clear-cut examples of this, such as Hitler and Mao. Consider Mao Zedong’s “Cultural Revolution” which “stands as a stark example of a dangerous ideology disguised as progress. Mao, believing capitalism had poisoned his utopian vision, waged war against the ‘”Four Olds”: old habits, ideas, customs, and culture. Books were burned and museums pillaged. Schools and hospitals closed.’ And though the actual number is disputed, it is certain that millions upon millions died as a result of this social engineering.”

The coercive utopians who disguise their lust for power in the name of progress have been some of our most ruthless mass-murderers. Last century was full of them. But the West today is not immune from all this. “Ultimately, it’s a simple formula that progressives follow. Out with the old and verboten, in with the new and state-approved, for the good of mankind and the world. The formula is universal, and in America, it’s no different.”

He quotes from eugenicist Margaret Sanger, “now an almost deified figure by the modern progressive”. He writes, “Like Hitler, Sanger felt that somebody should decide who can acceptably reproduce and who cannot, and those belonging to the latter category of ‘unfit’ parents were as well-defined for her as they were for Hitler….

“Now, if some Republican were to announce today that all welfare recipients should be sterilized because they are useless burdens in our society, we can be sure that the outcry would be sharp and swift, with ample cries of inhumanity and racism. But the fact that Margaret Sanger said as much, even suggesting that the poor are ‘inferior’ human beings, doesn’t tarnish her legacy a bit – and in fact, just a few years ago Nancy Pelosi reworded Sanger’s above suggestion, her ‘final solution’ to the poverty problem….

“So it should be obvious that new progressive leaders are, in some ways, still out pitching some of the same early twentieth century ideas of ‘progress’ that yielded humanity’s darkest hours, but modern progressives are seemingly too dim to recognize the danger in that – and worse, they either hearken back to such eras of progressive expansion as a suitable template for the future (the liberty-strangling New Deal, for example) or they directly continue such progressive expansion which began in the early twentieth century (as with Sanger’s eugenics outline for social betterment).”

Sullivan concludes, “If unborn babies are living human beings (which Sanger undeniably believed to be the case, often arguing that contraception was the preferable path, describing abortion as ‘the wrong way- no matter how early it was performed it was taking a life’), the indirect death toll of the abortion industry she helped foster – now over 57 million in America and currently contributed to and upheld by countless progressive politicians including Catholics John Kerry, Nancy Pelosi, and Joe Biden – surpasses the magnitude of Holocaust by decades in length and tens of millions of souls in scope.

“And when you frame it that way, one might be inclined to ask not whether the analogy is hyperbolic, but why hyperbole or a cogent analogy would even be necessary to conclude that progressives routinely celebrate a dark, dark legacy.

“In short, when a politician shouts ‘Progress!’ (…or ‘Forward.’) as an abstract and guiding political principle, people who understand history will rightfully become wary and keenly observant. They may even boldly resist the seemingly unstoppable waves of change that they find threatening. People who are ignorant of history, however, will do as they always have – they will clap their hands and bleat like sheep.”

Quite so – there are plenty of sheep out there who know nothing of history and will therefore always bleat with approval over anyone who talks about “progress”.