If you are a biblical Christian you of course believe in a personal, malevolent, spiritual being known as the devil. And you know that he hates God and God’s purposes. Thus he works incessantly to undermine and destroy everything related to God and God’s people.

So he hates the church, he hates Christians, he hates the Bible, he hates worship, he hates godliness, and so on. He thus seeks to thwart, pervert, debilitate and immobilise the church at every turn. So put yourselves in his shoes for a moment (admittedly not something any Christian would want to do).

If you had to devise a fiendish way to incapacitate the church, to divide the church, to compromise the church, and to destroy it from within, what diabolical scheme would you come up with? There are many such schemes that come to mind, but I can think of hardly anything better than to use the issue of homosexuality to unravel the church.

Indeed, I have been warning about this for decades now. Often my warnings have fallen on deaf ears, or have been ridiculed and rejected. But I have not been alone here in sounding the alarm, and acting as a watchman on the wall to an often deaf, lethargic and sleeping church.

Others have sought to rouse a moribund church from its slumber concerning this issue. One clarion call to the church was made way back in 1991 by ex-homosexual Joe Dallas. He said this in his important book, Desires in Conflict:

“The debate over homosexuality and the Bible – specifically, whether or not the Bible condemns homosexual acts in all cases – will do no less than rip the body of Christ apart within the next decade. It will force believers to declare, in black and white terms, where they stand on issues of sexuality and biblical interpretation.”

He sure got that right. Everywhere in the West we see the church compromising and capitulating on the issue of homosexuality and homosexual marriage. We see one church after another caving in here, with church leaders, pastors, individual churches, and even entire denominations rejecting God and his Word as they readily embrace the homosexual agenda.

The most recent case involving World Vision and its utter capitulation to political correctness and appeasement concerning homosexuality is simply the tip of the iceberg. There are plenty of other shocking and appalling examples of Christian leaders, Christian organisations, and Christian churches selling their souls to the devil in order to be popular, well-liked, accepted and “relevant”.

Thus if I were the devil I would keep on doing what has proven to be such an overwhelmingly successful strategy: Target the churches, get them to compromise and doubt the Word of God, get them to be more concerned about what the world thinks than what God thinks, and get them to actually believe they are being good Christians by embracing the militant homosexual agenda.

What a winning formula. The devil must be popping the Champagne corks on a daily basis, given what he is witnessing in so many parts of the West. He is on a roll, and is delighted with how deluded, deceived, compromised and theologically illiterate most Christians are today in the West.

And just as God works through his people, so the devil works through his human minions. And he has plenty of willing servants – or useful idiots – to do his bidding, even in the churches. Those who hate the church and want to see it forever neutralised have been long at work on this.

That is to say, none of this has been happening by accident. There have been long-standing strategies set in place to bring about these very results. Enemies of faith, freedom and family have been at work for quite some time now to see the church in particular and the West in general put out of action.

Consider for example the Italian Marxist Antonio Gramsci. He famously spoke about the “long march through the institutions”. By that he meant the deliberate and patient overtaking of institutions of power and influence from within, such as the media, the political world, the academy – and yes, even the churches.

Instead of external revolution and violence, he and others counselled internal subversion and infiltration. And of course the cultural Marxists have been eminently successful in all this. They have pretty much taken over the media in the West, the universities, the judiciary, the political realm – and most importantly, the churches.

And the homosexual activists have been leading the way here. They too have their strategies, their plans, and their well-thought out means by which they seek to bring down the last great source of opposition to their agenda: the Christian churches.

They have even told us how they intend to bring this all about! Yet most Christians are utterly clueless about all this. They are utterly in the dark as to how the homosexual activists have thought long and hard as to how they will take over the churches. 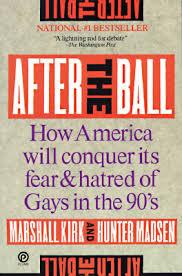 Having learned well the lessons of Gramsci and others, they have offered detailed strategies as to how they will win. A number of examples could be appealed to here, but let me mention just one. Back in 1989 two homosexual cultural Marxists, Marshall Kirk and Hunter Madsen wrote a very revealing book entitled After the Ball: How America Will Conquer Its Fear and Hatred of Gays in the 90s.

Every concerned Christian should have a copy of this book. I certainly do. It is no mere wish list or abstract vision. It is a very detailed and carefully thought through battle plan for winning the war against any and all opposition to the homosexual agenda. It is a comprehensive and brilliant blueprint for winning the war, with no compromise along the way.

In fact, it is a full 400 pages long, and is a perfect example of Gramsci’s strategic thinking in action. It is all about white-anting (to use an Australian phrase) the West from within. It really is an ingenious volume. The use of propaganda, indoctrination and advertising is a big part of their campaign. And the church was certainly not left out of their thinking. Let me offer just one paragraph here:

“Gays can undermine the moral authority of homohating churches over less fervent adherents by portraying such institutions as antiquated backwaters, badly out of step with the times and with the latest findings of psychology. Against the atavistic tug of Old Time Religion one must set the mightier pull of Science and Public Opinion… Such an ‘unholy’ alliance has already worked well in America against churches, on such topics as divorce and abortion. With enough open talk about the prevalence and acceptability of homosexuality, that alliance can work for gays.”

Yep, and we see that all working out very nicely thanks. The churches are so concerned about public opinion, pleasing the world, not rocking the boat, and not offending anyone, that much of this strategy we now see being fulfilled. Churches are crawling over each other to be the first to reject their own faith in order to be pleasing to men.

World Vision is just one case in point. So I repeat: all this is not just happening by accident. It has all been carefully planned and orchestrated by those who are seeking to see the church rendered totally ineffective and irrelevant. And behind these schemers is the Grand Schemer, the devil, who is rubbing his hands with glee at how very nicely things are going according to plan.