Disclaimer: I am not going to waste my money on this film. When it comes out on DVD or on TV, I may then take a look. But if I do see it later, I am quite certain my thoughts will not change from what I offer here. The truth is, we have seen the trailers, we all know a fair amount about the film already, and when you read heaps of reviews from those you respect and trust, what more is needed?

Some misguided Christians claim I must experience this film, otherwise I cannot speak to it. But I haven’t had firsthand experience of a satanic church service either – so what? There are plenty of things I can rely on others about, and/or I don’t need to experience myself. And with many dozens of reviews and articles now out on this film, I think I have a pretty clear understanding of what is going on here. 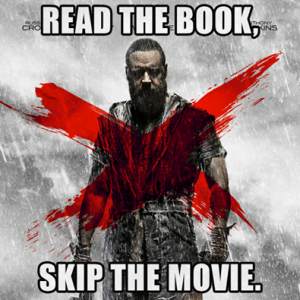 Furthermore, I really should call this piece ‘Noah and the Utter lack of Christian Discernment’. For that is what this piece really focuses on. This is the situation we find ourselves in: Christians who should know better are so biblically illiterate that they will actually side against their own faith and against Holy Scripture, and side with pagan Hollywood filmmakers. Go figure!

Since we first heard about this film, many of us knew this would be a crap movie. This is Hollywood after all. And when we knew ahead of time that the director is an atheist; that God is never once mentioned in the film; and that a main theme of this film is loopy environmentalism, then you know this thing is going to be a loser.

And it gets even worse. Director Darren Aronofsky said he is proud of the fact that he’s taken a story inspired by God’s word and turned it into something so secular. He even called his movie “the least biblical biblical film ever made”. Yet clueless Christians are still defending the film to the hilt. You know we are in big trouble when atheists have more biblical discernment than those claiming to be Christians.

And that is the biggest problem for me. I don’t care at all if you want to see the movie. Go for it. You can see whatever you like. But what I do care greatly about is the legion of biblically illiterate Christians praising this film, and going on about what a great “witnessing tool” it is.

There has been one Christian after another defending the film, telling us we must use it to dialogue with others and to reach people. I have been utterly shocked and saddened to see that biblical discernment is at such an all time low amongst the church today, and amongst so many of our so-called Christian leaders.

Christians today are so compromised and carnal that they actually feel the need to slovenly grovel before the latest Hollywood offerings. Forget the movie – I knew it would be a loser. The biggest loser in my books is a church so compromised, so convictionless, and so squeezed into the world’s mould, that it can no longer think biblically.

It will actually defend Hollywood rubbish rather than take a solid stand for the Word of God. And such evangellyfish will actually tell us what a great tool such a film is for evangelising! But the real question is, will all those unbelievers be sold a bill of goods, and become even further turned off to the Bible? One must be very careful here.

Sure, God can use the film if he wants. He can use anything, even Balaam’s ass. But that is not the point. The real issue is this: might it not be possible that more people will be hurt than helped here? Might more people be hardened, deceived, led astray and further confused than saved? That is certainly possible.

So, can God use anything? Yes, but it is not always advisable to promote every means. He can use atheists and rebels, and he can use Assyria and Babylon, etc. That does not mean we must go down this path as well. In that sense he could even use a film like The Da Vinci Code to perhaps reach others, but I would not recommend it.

If we really want to help people come to the Lord, there are far better means available, including simply telling them the gospel! Of course we can use other means, but so many believers seem so ashamed of their own faith, and never actually tell people the gospel. They have to rely on pagan Hollywood to “open doors” for them. Such is the anaemic condition of Christianity today.

I even had Christians tell me this film is fully defensible because we see God-given “creativity” here – even from an atheist film maker! Yeah, well Satan can be creative too, and we can see people led creatively to hell. Sorry, but God’s common grace can be used by the enemy big time. I don’t care how “creative” a film might be if it ends up leading many souls to hell. There is nothing virtuous in “creatively” twisting the word of God, deceiving people, and sending souls to a lost eternity.

We seem to be so obsessed in defending Hollywood, “creativity” and the like, that we miss the bigger picture here. If our zeal for a pagan film in fact leads people to a lost eternity, then we need to rethink our Christianity. If we end up becoming culpable in harming others and putting a stumbling block in their path, that is not a good place to be in.

As one observant Christian said, “If they’re financially successful with this what might be the next Biblical story they distort? Let’s just think about that: they could do Jonah and the whale – that could be about animal rights somehow; or they could do a story about David and his friend Jonathan or one about Jesus and the disciple he ‘loved’ John. I don’t even want to think about what they could do with those.

“There are always a few discrepancies in biblical films. I accept that they don’t get them perfect. But Noah sounds like all they kept was animals, water and a boat. The context, that it occurred because humans sinned against God (not nature), is lost. How far do we bend for Hollywood? How many lies do we accept?”

Yes quite right. I can easily offer a dozen reviews which are saying the same thing. But let me finish with the words of just one. And it is a terrific review, from a Christian and a Hollywood insider, Barbara Nicolosi. She begins her review this way:

Tragically, as Western Civilization continues to decay all around us, one thing remains unmuddled: everything is politics. And nowhere is that more true than in media. The same polarization that fired Phil Robertson of Duck Dynasty and then got him rehired, and made Mel Gibson $600 million, and then lost him his Hollywood career, and made half the world want to canonize Roman Polanski with the other half wanting him castrated — these are the same social causes propelling the embarrassingly awful horribleness of Darren Aronofsky’s Noah, into a 76% fresh rating from the shameless, agenda-driven critics at RottenTomatoes, and setting so many Christian leaders and critics into shilling for the same. Please, stop the madness. It is astounding to me how Christians can be lured into a defense of the indefensible because they are so afraid of the charge of “unreasonableness.” Trying so hard to be nice, we end up being patsies for people who have no other agenda than to make money off of us.

Noah is a terrible, terrible movie. I kept thinking all through, “Wow. The secular critics hate Christians this much. They hate the Christians so much, that they will rave about this piece of crap because they think the Christians are going to hate it for ideological reasons.” And the Christian critics? Well, too many have been all balled up in the throes of self-loathing for at least a decade, which leads them to depths of self-contradiction in their popular culture appraisals that never seems to have a bottom. As soon as the momentum around this picture as offensive Scripturally began to go – and it is clear that this was generated intentionally by the studio and PR people promoting Noah – the Christians felt themselves double-dared to show themselves “enlightened” enough to embrace the movie even as it spits in their eye in every way – as an adaptation of Scripture, as a work of cinema, and as a plain old story.

And she doesn’t mince any words in her conclusion:

Anybody who says Christians need to see the movie to promote dialogue is being a tool. Anybody who says the movie is visionary is jumping on an Emperor has No Clothes bandwagon. Any pastor who creates a sermon to coincide with this awful piece is being played for a sucker. And the Christians who are promoting the film for money should be ASHAMED of themselves. Really, how dare you?

So, if you want to go see the film, fine. Go for it. But please spare us all these gung-ho defences of the film. Some of these believers seem more keen on defending a pagan film than they do their own Scriptures. And if you are really concerned about reaching the lost, why don’t you just try sharing the gospel for a change? Relying on Hollywood to do our evangelising for us indicates a church that has lost its way big time.

57 Replies to “Noah and Christian Discernment”