John mentions the palm branches laid before him as he entered on a colt. Matthew and Mark mention cloaks and branches, while Luke mentions just cloaks. Laying these various things on the road as he rode into Jerusalem was of course a symbol of his kingly entry. 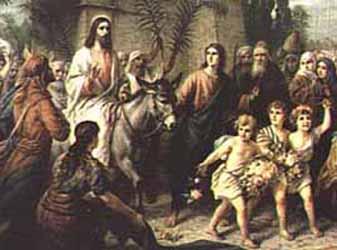 And it all had a very familiar ring to it for these first century Jews. The event was loaded with biblical symbolism and meaning. Let me present a few comments about all this from Tom Wright, who looks at the four accounts:

“Those who knew their Bibles might have remembered that when one of Israel’s kings of old was proclaimed king in defiance of the existing one, his followers spread their cloaks under his feet as a sign of loyalty (2 Kings 9:13). They were determined to make a statement about what they thought was going on. They also waved the branches they’d cut from the trees to make a celebratory procession for him. This too carried ‘royal’ implications.” (Matthew For Everyone)

“The ride on the donkey, with its echo (obvious to people who knew their Bibles) of Zechariah 9:9, makes the same point. And John adds other echoes of prophecies and psalms which all point in the same direction. Jesus is the true king, coming at last to set his people free.” (John For Everyone)

“It was Passover time – freedom time! But it was also, as far as they were concerned, kingdom time: the time when Passover dreams, the great hope of freedom, of God’s sovereign and saving presence being revealed in a quite new way, would at last come true. The long climb up through the Judaean wilderness was the climb to the kingdom.” (Mark For Everyone)

“This was to be the climax of his story, of his public career, of his vocation. He knew well enough what lay ahead, and had set his face to go and meet it head on. He couldn’t stop announcing the kingdom, but that announcement could only come true if he now embodied in himself the things he’d been talking about. The living God was at work to heal and save, and the forces of evil and death were massed to oppose him, like Pharaoh, and the armies of Egypt trying to prevent the Israelites from leaving. But this was to be the moment of God’s new Exodus, God’s great Passover, and nothing could stop Jesus going ahead to celebrate it.” (Luke For Everyone)

This then is why we celebrate Palm Sunday. It is about the King of Heaven entering the city of King David, to now finally enact his saving work. But instead of being enthroned as a great King, he had to suffer and die on a cruel wooden cross. But this was the divine means by which the real Exodus, the real Passover, and the real Kingdom inauguration was to take place.

It was, in short, his entry into a city where he would die for our sin and rise again, so that we can be reconciled to God and have newness of life. That is what any true Christian should celebrate on Palm Sunday. But regrettably, all that is now almost completely lost.

Instead, today we have all sorts of folks using this holy day to push political agendas. The day, in other words, has been hijacked. Sadly we had a perfectly clear illustration of this today, with a Palm Sunday march becoming nothing more than one big political demo. As a Sydney newspaper put it:

A cluster of choir singers serenaded Sunday city-goers in Melbourne as an enticement to join their rally in support of asylum seekers. But if that wasn’t enough to get their attention, bells atop four CBD churches were set to simultaneously ring out to mark the beginning of the protest. A mixed bag of Palm Sunday church-goers joined hundreds of families, union members, activists and community groups for the Walk for Justice for Refugees rally, which kicked off at 2pm outside the State Library for a march stretching past Federation Square. Georgie Stubbs, from Mornington, joined a church service on Palm Sunday in support of asylum seekers before heading to the rally. “Whether you believe in Jesus or not, he’s been an amazing example on how to live, and love, and care for others,” she said.

That last statement is the most revealing. Palm Sunday no longer has anything to do with Jesus, and you need not even believe in him to commemorate the day. Instead, you can be an activist, a unionist, or part of the leftist rent-a-crowd. The main thing is to make a political point.

Who cares that this day actually has to do with Jesus dying a horrible death so that sinners can be set free? Who cares that this was about preparing for the coming King? Let’s just turn it into a day of political activism. Well, they have done that alright. Palm Sunday has been hijacked.

On the television news we saw religious leaders gloating about how all kinds of people were there. They need not have been Christians. The main thing is they were there to dump on Tony Abbott and the Coalition, and their boat policy. And that policy means this: we have had well over a hundred days now with no boats, no deaths at sea, and people smugglers left reeling, looking for new business.

But to these folks, this successful policy is the epitome of evil. They are upset that the boats have stopped. One must ask: Just where were these folks when under Labor policy hundreds of boats arrived and over a thousand people died as a result? It seems like they prefer Labor and dead people to the Coalition and alive people.

Hmm, weren’t these the same people who screamed wildly while demanding that people like Geert Wilders should not be allowed to enter our country? Just askin’. And of course you also had all the usual num nums holding up signs saying Jesus was a refugee. Um, not quite.

But the biblical way to view these matters I have addressed elsewhere, so I invite you to have a read: billmuehlenberg.com/2010/11/09/christians-and-asylum-seekers/

If people want to make a stink about government policies, that is up to them. But I object to having one of the most special days of the Christian calendar being hijacked like this. And I am especially appalled at all those church leaders who were involved in this.

If they were seeking to celebrate the life, death and resurrection of Jesus Christ on the streets, that would be fine. But if all they can do is turn Jesus into yet another leftist political activist figure, then I am not one bit impressed. We of course expect secular lefties to get the gospel message so horribly wrong.

But when so-called Christian leaders distort the gospel this badly, then the church really is in bad shape.