The difference between Christians on the left and right side of politics is fairly pronounced. While we are all one in Christ, unfortunately, there are plenty of areas of disagreement that can be found amongst believers. As I have written elsewhere, biblical Christianity ultimately transcends mere partisan politics, but we still live in the real world, and we will still find ourselves differing on many political and social issues. For more on that, see here: billmuehlenberg.com/2007/09/13/religion-and-the-political-spectrum/ 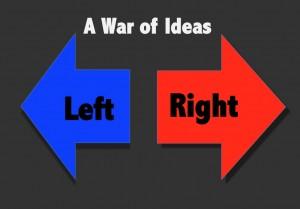 And these differences are often not so much on the issues themselves, but how we best deal with them. That is, both sides rightly care about things like poverty. But they come up with quite different solutions to the problem. For example, the religious left usually looks to socialist or statist solutions, while the religious right usually opts for a free market approach.

Not only must these two approaches be assessed in terms of how they might or might not line up with Scripture, but they also should be assessed in terms of their efficacy. Do such proposals actually work? Do these preferred solutions actually help the problem, or make things worse? I speak to this further here: billmuehlenberg.com/2013/09/18/christians-and-foreign-aid/

Here I want to return to the big bang which occurred recently because of the incredibly bad decision making of the US World Vision. First they basically approved of homosexuality, then because of public pressure, they backflipped and went into damage control. I have already written extensively about all that.

But what this messy affair did once again highlight was the major differences between the religious left and the religious right. The lefties of course generally don’t have a problem with things like homosexuality, so they tended to support the original WV decision.

Conservatives on the other hand not only were greatly concerned about this rejection of God’s express commands about human sexuality, but the general leftist direction of this once great organisation. So all sorts of debate erupted over all this, including plenty of fuzzy thinking from the left.

They came up with the usual silliness that we of a more conservative stance don’t care about the poor, and are hung up on issues of “personal morality” – things like homosexuality, abortion and the like. Consider what one religious lefty and WV defender had to say in this regard. He attacked conservative Christians this way:

“However, they pulled out of giving to the poor as well, because that is what their religious culture expected as soon as gay marriage came into play. So what does gay marriage have to do with feeding the hungry, the poor, the children?”

Now this is a pretty dumb comment, for a number of reasons. What is that about a “religious culture”? Excuse me, but how about simply taking seriously what God has revealed about his purposes for human sexuality? It is not some “religious culture” that is moving us here, but the clear teachings of Scripture on the issue of homosexuality.

I would have thought that anyone who calls himself a Christian would be concerned about what God clearly has to say about such matters. But for so many on the religious left, they seem to simply pick and choose those parts of Scripture which their leftist ideology most nicely fits in with.

Also, this is known as the logical fallacy of the false dilemma: either we feed the poor or we obey God’s word on sexuality. Baloney. The truth is we can and should do both. Why make us choose between doing one or the other? That is just foolish.

And there are of course plenty of biblically faithful aid organisations which we can support – those that are both helping the poor and needy and are staying true to Biblical ethics and morality. I prefer supporting those groups which take all of God’s word seriously, not just bits and pieces of it.

And look again at his last sentence: “So what does gay marriage have to do with feeding the hungry, the poor, the children?” If he is really interested in getting an answer on this, he really should ask that of Jacquelline Fuller. This World Vision board member and obvious religious lefty wanted to do exactly this!

This is what she had to say: “I am a huge fan of the work World Vision does around the world to help the poorest of the poor. However, I resigned as a board member … as I disagreed with the decision to exclude gay employees who marry.”

There you go – this lefty thinks that she can’t support the WV work for the poor, because it is not politically correct when it comes to homosexuality. So this lefty commentator should really be asking her, and not me, these sorts of questions.

Of course there were plenty of other lefties weighing into all this. One was blogger Rachel Held Evans who wrote a piece called “How Evangelicals Won a Culture War and Lost a Generation”. It too is filled with the same leftist moral mushiness which puts concern about a vague “social justice” ahead of all other biblical basics.

She too snubs her nose at the importance of biblical sexuality and marriage: “There is a disproportionate focus on homosexuality.” She too makes the same logical fallacies: “Is a ‘victory’ against gay marriage really worth leaving thousands of needy children without financial support?”

And she makes the claim that those on the religious right have an “obsession with opposing gay marriage.” Um, no, it is the homosexual militants, and their duped religious lefty groupies, who are obsessed with this. Indeed, we did not start this fight. When activists want to destroy God’s institutions of marriage and family, I have a Christian duty to defend those things.

And in true leftist fashion, she even throws in her concerns about “the denial of evolutionary science.” Makes sense: vigorously uphold and defend every secular worldview item, while trashing your own Bible, and still claim to be an “evangelical”. Yeah right.

Chelsen Vicari of the Institute on Religion and Democracy also responded to Evans:

Despite admitting that the series of events motivated her to leaving evangelicalism, Evans asserts that World Vision’s flip-flop “is not an issue of orthodoxy. But when we begin using child sponsorships as bargaining tools in our debates, we’ve lost the way of Jesus.” Actually, World Vision is the perfect illustration of the un-attachable orthodox tradition of evangelicalism.
A mother of a conservative evangelical family I know told me her family has been sponsoring three young girls in Savane Plate, Haiti for a while now. They choose to give through World Vision because it was their understanding the organization’s compassionate work was based on a Gospel-centered pledge to the cross and resurrection. So when this mother learned of World Visions’ temporary decision to recognize same-sex unions, she was heartbroken. It was with prayer and Godly counsel – not flippant aggression – they chose to funnel their sponsorship elsewhere.
Continuing on, Evans claimed that evangelicals snatched away “aid that would otherwise reach the poor, sick, hungry and displaced people World Vision serves.” She pointed fingers at Southern Baptist Theological Seminary’s Albert Mohler Jr. and the Assemblies of God claiming they preferred to “withhold aid from people who need it” rather than support the redefinition of marriage.
Evans failed to disclose that the Assemblies of God general superintendent, George O. Wood encouraged members to “begin gradually shifting their support…to Assemblies of God World Missions, and other Pentecostal and evangelical charities that maintain biblical standards of sexual morality.” The goal was to reroute funding, not take our donation dollars and go shopping at the GAP.
Social justice is important to conservative evangelicals. We too hold tight to Micah 6:8, which instructs Christians “to act justly and to love mercy and to walk humbly.” Actually, those conservative evangelicals that Evans rails against chose to donate to World Vision when there were no media spotlight and no political activists and popular bloggers calling on them to do so. They gave to the poor when no one was looking because that is what God commands us, not what culture expects.

As I say, I will continue to support groups which are effectively helping the poor, and upholding biblical standards across the board. If the lefties want to support increasingly secularised aid groups, that is up to them. But not me.

17 Replies to “The Religious Left Continues To Get It Wrong”