“We are NOT a Christian nation. The Constitution IS NOT based on the bible. It IS a secular document.” This comment – so very typical of the secular left – was thrown at me recently on another site. It is all part of the secular humanist attempt to rewrite American history and blot out all mention of the decidedly Christian foundations of the United States.

It is a bit like suggesting that the Ku Klux Klan is a non-racial peace organisation. That would mean to completely ignore everything about its founding, its origin, and its clearly stated aims. The same with America’s founding: everything about it was premised on the Judeo-Christian worldview, and the American Founding Fathers most certainly did intend for Christianity to play a leading and vital role in the nation. 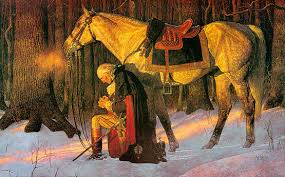 There are of course many thousands of books to appeal to in this regard. And many noted experts who discuss the interplay between Christianity and American history can be mentioned here. The many works of Edwin Gaustad, Mark Noll, George Marsden, David Barton and Nathan Hatch – to name but a few – are just part of the prolific output of recent historians who have spoken about this at length.

I have elsewhere looked at various volumes on the spiritual and intellectual roots of the American founding. The trilogy by Peter Marshall and David Manuel for example is well worth noting, amongst others. See here for more on this: billmuehlenberg.com/2010/12/22/nations-virtue-religion-and-freedom/

Here I want to refer to a handful of other volumes well worth considering. These half dozen books so solidly and thoroughly make the case for the Christian origins of America that no one should have any more doubts about the matter after consulting even just a few of these works.

Back in the 1960s a massive two-volume set appeared which highlighted in copious detail the nature of the American system and its biblical basis. In 1960 Verna Hall wrote and compiled The Christian History of the Constitution of the United States of America. This massive 500-page tome consists mostly of numerous documents discussing the Christian heritage of America, ranging from noted political commentary of the time, to state constitutions, speeches and the like.

My critic whom I quote above would find himself with nothing to say if he even bothered reading just a few pages from this important volume. The suggestion that America was somehow founded by a bunch of secularists is just ludicrous in the extreme, and is nothing but an attempt to whitewash the historical record.

In a companion volume released in 1965, Rosalie Slater discussed these issues even further in Teaching and Learning America’s Christian History. Here another 400 pages are devoted to documenting the overwhelmingly Christian foundation of the American Republic.

In 1964 C. Gregg Singer wrote A Theological Interpretation of American History. In it he notes how strongly America’s founding was influenced by Christian thought in general, and Puritan thought in particular. While there were of course Deists and Unitarians involved, especially around the time of the writing of The Declaration of Independence in 1776, by the time of the Constitutional Convention and Ratification of 1787-1789, evangelical Christianity was extremely influential.

And the huge influence of biblical Christianity on the Constitution and the founding of America did not entail a theocracy. Says Singer, “Puritan political theory assigned quite different roles to church and state. Both were divinely ordained for certain definite purposes, but the purposes were not identical, and the Puritans never confused these two institutions, or their respective roles, in their society.”

Historian Thomas Kidd wrote an important 2010 volume called God of Liberty: A Religious History of the American Revolution. In it he notes that while there was a divergence of faith systems, from deism to evangelicalism, they tended to unite in their support of religious liberty and in their opposition to British tyranny.

He lists five religious beliefs that united these divergent groups:
-belief in the disestablishment of state churches
-the idea that the creator God was the source and guarantee of human rights
-the threat of human sinfulness to the polity
-the idea that a republic needs to be sustained by virtue
-belief that God – or providence – was raising up America for a special purpose

In 2011 By the Hand of Providence: How Faith Shaped the American Revolution was released by historian Rod Gragg. Simply to read the opening pages will forever disabuse any serious reader of the foolish notion that America did not have a Christian beginning and foundation.

The Christian faith infused the political ideas of almost all the Founding Fathers, and people like Washington simply cannot be understood without reference to his deep and profound personal faith, which influenced everything he did. Says Gragg, the Continental Congress “reflected the Judeo-Christian worldview on which Colonial America was established and which prevailed as the common consensus throughout America at the time of the Revolution.”

His very last sentence will infuriate the secularists, but so nicely captures the pervasive Christianity in America’s founding: “George Washington then took his first action as President of the United States: he leaned forward over the open Bible and reverently kissed the Scriptures.”

Finally, let me mention the incisive 2012 volume by Os Guinness, A Free People’s Suicide. In it he contrasts America’s Christian beginnings with its current decline. After documenting the faith-based construction of the Republic, and citing numerous explicit mentions of faith and biblical Christianity in the Founding Fathers, he says this in his concluding chapter:

“If Lord Acton was right that religion is the key to history and Christopher Dawson was correct that every great culture has been empowered by a vital and creative faith, then as your faiths, so will your character, virtues, and culture be. This means that there is probably no chance of reordering society effectively unless there is a reforming and successful reordering of the faiths of the citizens too.”

He asks Americans what they have done with their inheritance: “You have turned from your founders and their vision of lasting freedom, and from the deeply held Jewish, Christian and classical beliefs that made their vision both necessary and possible. You have turned to alternative visions of freedom that are seductive but lazy-minded and empty, and are now proving disastrous. And all the time you are turning yourselves into caricatures of your original freedom in ways that are alternatively fascinating and repellent to the world. Will you return?”

A good question indeed. But we can only return after we first recall what we are returning to. It certainly was not a nation founded upon secularism, but a city set on a hill, fully inspired and permeated by robust biblical faith, and determined to become something great in the providence of God.

3 Replies to “America, Christianity, and Secularism”