One does not need to be expert in history to know that Europe has had its fair share of wars. For far too many centuries war, battles and conflict have raged throughout the continent. Last century we had the two Great Wars which ended up dragging in much of the rest of the world.

That planet earth is still surviving is no mean feat. But we have somehow managed to survive, and I am in Europe now, proving that peace – for at least some amount of time – is possible in this incredible continent. And in Holland, along with much of the rest of Europe, it is hard to forget about war. 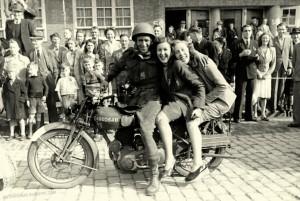 National remembrance days and so on keep the populace mindful of their recent past, and of all the blood which has been shed in so many conflicts. For example just last night we had Dodenherdenking (a remembrance day for the dead) here in Holland.

Each May 4 the Dutch pause to remember all those who fought and died during World War II and in wars afterwards. At 8pm the nation comes to a standstill, and two minutes of silence are observed for the fallen. Many Dutch people will pull their cars off the roads at this time – even on the busy freeways.

During the evening service a wreath was laid at the National Monument in Dam Square in Amsterdam. Last night the relatively new King and Queen did this task, with 20,000 observers in attendance. It was a very solemn moment, and one which no one should forget.

And today there is another national day of remembrance here in the Netherlands – this time, Bevrijdingsdag (Liberation Day). Sixty-nine years ago Holland was liberated from Nazi occupation by the Allies. The Canadians played a big role in this, along with the Brits, the Americans, the Poles, and others.

When I first arrived in Holland in 1979, there had only been 34 short years between then and the end of the fighting. Many people then would still have had very fresh memories of the great European war. Today of course there are fewer veterans around, but still, many were involved one way or another back then, even if as a child.

So next year will mark the 70th anniversary of VE (Victory in Europe) Day. The liberation of Europe and the defeat of the Nazis was one of the most significant events of the past century. Even though it may seem like an event that occurred long ago, the old saying, “never forget” is still so relevant here.

The purpose of remembering history is to avoid repeating its mistakes, as the Spanish philosopher Santayana once remarked. It seems we have not learned the lessons of history very well. We keep repeating the same mistakes, and we keep ending up in horrific conflict.

Of course in a fallen world this is rather to be expected. Fallen man, bent forever on self, will always have within him the required fodder to unleash war – whether with family, or neighbour, or on a larger scale. Human sin, selfishness, greed, anger and impatience all contribute to conflict and war.

Sure, there are territorial disputes and political motivations for many wars, but as the Scripture teaches, at bottom is our sinful, fallen hearts. As we read in James 4:1-3: “What causes fights and quarrels among you? Don’t they come from your desires that battle within you? You desire but do not have, so you kill. You covet but you cannot get what you want, so you quarrel and fight. You do not have because you do not ask God. When you ask, you do not receive, because you ask with wrong motives, that you may spend what you get on your pleasures.”

The Bible not only records many wars, but informs us that wars will continue until Christ returns. Jesus spoke about this for example in the Olivet Discourse. In Matthew 24:6-8 we find him saying this: “You will hear of wars and rumours of wars, but see to it that you are not alarmed. Such things must happen, but the end is still to come. Nation will rise against nation, and kingdom against kingdom. There will be famines and earthquakes in various places. All these are the beginning of birth pains.”

And in the great book of Revelation we read about more warfare, including those who would make war against the Lamb of God: “They have one purpose and will give their power and authority to the beast. They will wage war against the Lamb, but the Lamb will triumph over them because he is Lord of lords and King of kings—and with him will be his called, chosen and faithful followers.” (Revelation 17:13-14).

Christ will prevail, and soon all wars will come to a complete end. As the ancient prophet Isaiah predicted so long ago:

Many peoples will come and say,
“Come, let us go up to the mountain of the Lord,
to the temple of the God of Jacob.
He will teach us his ways,
so that we may walk in his paths.”
The law will go out from Zion,
the word of the Lord from Jerusalem.
He will judge between the nations
and will settle disputes for many peoples.
They will beat their swords into plowshares
and their spears into pruning hooks.
Nation will not take up sword against nation,
nor will they train for war anymore. (Isaiah 2:3-4)

And in Revelation again we read these very encouraging and reassuring words:

Then I saw “a new heaven and a new earth,” for the first heaven and the first earth had passed away, and there was no longer any sea. I saw the Holy City, the new Jerusalem, coming down out of heaven from God, prepared as a bride beautifully dressed for her husband. And I heard a loud voice from the throne saying, “Look! God’s dwelling place is now among the people, and he will dwell with them. They will be his people, and God himself will be with them and be their God. ‘He will wipe every tear from their eyes. There will be no more death’ or mourning or crying or pain, for the old order of things has passed away.” (Revelation 21:1-4)

It may have been nearly 70 years since major warfare in Europe came to an end, but the continent still groans over its history of incessant conflict, and its blood-soaked lands still cry out for a final rest. The heartache, tears, and grief that so many millions of people have known, not just in Europe, but worldwide, because of wars and conflicts will one day finally come to an end.

That is part of the blessed hope which Christians have. We know that human history as it currently is will one day come to a conclusion, and Christ’s rightful rule and reign will finally and fully begin. The return of Christ is not just the answer to war, but to all human suffering, folly, despair and hopelessness.

The nations may rage against God, but in the end it is the King of Kings and Lord of Lords who will prevail. And with that will come an end to warfare, bloodshed, human misery, and all tears. Oh what a day that will be. The unbeliever of course does not have such hope.

Godless tyrants unleashed hell on earth, all in their vain attempts to set up a people’s paradise on earth, sans God. We should have learned our lessons. Real peace can never be obtained without the Prince of Peace. Only Christ can bring genuine peace to the human heart, and one day, a lasting peace to planet earth.

It may be fitting to end with Handel’s Messiah here. His musical masterpiece is of course drenched in Scripture, and it would not have been possible without the Word of God. Part of the famous Hallelujah chorus has these words:

Enjoy it here with lyrics, as we reflect on a world without war – one in which the Prince of Peace reigns forever and ever: www.youtube.com/watch?v=FoqxYqTNKmU

2 Replies to “Europe, War and the End of History”