My whirlwind trip through Europe is now at an end, with my last days being spent in the UK before heading home. While revisiting Europe has been great in so many ways, it has also been quite depressing in other ways. The beauty, charm, history and heritage remain overwhelming, but so much of what made Europe great simply is no more.

What we have today is secular, decadent Europe. It is the first continent on earth to tell God to get lost and to live with the sordid consequences of that decision. Morality in all forms has especially suffered. If Europe today is in many ways a no-God zone, it is also a no-morality zone.

Anything now goes, and the more gross and perverse the better, it seems. Two very recent examples simply can be mentioned here, in addition to hundreds of others. By now you may have heard about the winner of the Europerversion – I mean Eurovision – Song Contest. 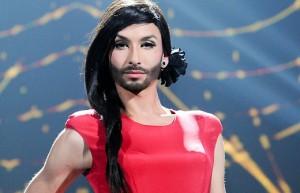 It seems the winner was an Austrian bearded drag queen named Conchita Wurst. While the surname may be quite fitting here, it is perhaps to be expected that this is where Europe is headed. It seems to have been a political choice as much as anything, with voters wanting to snub Russia because it has been cracking down on homosexuality of late.

And not much better – indeed, perhaps even worst – was yet another depraved “performance” by resident sleazeball Miley Cyrus. The headline is about all I can share here: “Just when you thought she couldn’t get any more outrageous… Miley Cyrus performs with a giant blow-up penis at London’s G-A-Y”. I will let you explore the pics – if you dare – at the link below.

Homosexuality is of course a big part of the decline of Europe. In many ways it is leading the charge in fact. The activists have pretty much managed to destroy a whole continent, and they are close to knocking off the rest of the West as well.

A new piece on the US homosexual scene by Robert Oscar Lopez could equally be applied to Europe and elsewhere. He does a good job of describing the decadence of “Gays Gone Wild”:

Ever heard of the “Gay ’90s?” The 1890s saw a fin-de-siècle cult of aesthetical excess that allowed promiscuous cads, homosexuals, demimonde solicitors, and pornographers to flourish in wealthy cities like Paris and Chicago, while the poor lived twenty to a room and the masses starved.
Back then, the term “gay” didn’t mean homosexual, but the ties between the two words were already being forged. “Gay” meant devil-may-care, a bit self-indulgent, irreverent, the bon vivant of the party who downs cocktails, engages in forbidden pleasures, and charms his way out of trouble.
The reference point to “gay” was fun tainted by dishonesty and callousness. It is quite appealing, unless you’re Oscar Wilde and society’s backlash catches up with you. “Gay” men were serial bachelors, deadbeat dads, bisexuals, homosexuals, drifters, gamblers, cross-dressers, opium addicts, and circuit boys. In the twentieth century, somehow all these forms of gleeful decadence became reduced to the mere question of homosexuality.
Some homosexuals quite foolishly took it upon themselves to carry on the tradition of perversion and excess by making their subculture ground zero for old patterns of social breakdown. Remember, we aren’t the first ones fooled. We are just the generation that got hoodwinked by this toxic mix when it was packaged as celebrating the wholesome liberation of same-sex love.

This is a lifestyle involving risky and dangerous behaviour:

At every turn, the show must go on. In the face of overwhelming evidence that things are going badly for gay people – there’s HIV, suicides caused by romantic cruelty from other gays, intimate partner violence, eating disorders, high addiction rates, high divorce rates, rampant sexual assault, syphilis, emotional abuse – personal interest stories are trotted out to distract people from unflattering statistics from the Urban Institute, the CDC, and the Department of Justice, while the public is pounded over the head with comparatively unimportant, and in any case shoddy, statistics showing that kids with gay parents get okay grades in school and have acceptable levels of self-esteem. (So it’s okay to rip them away from one of their biological parents forever?)

I was talking to a group of ex-homosexuals in Amsterdam just a few days ago, and they asked me if we can turn things around in Europe. I said things were looking pretty grim at the moment, but I raised the story of Wilberforce and what he faced a few centuries earlier.

He succeeded against all the odds in his war against slavery, and by God’s grace it is possible things on the sexual front can turn around in Europe. With a lot of work, prayer and costly love, it is most certainly possible. And in the meantime, on various fronts, we are seeing some things turning around in Europe.

One recent article offers a glimmer of hope here. It begins:

It has taken a long time, but many people in Europe are finally waking up and are coming to see what kind of spiritual battle is raging. The conflict between the secular worldview and the Christian worldview has finally been realized by an increasing number of people. But even some who are not close to Christianity understand that there are ideological manipulators at work here trying to form the culture in a way that stands contrary to common sense.
These cultural threats include gender-ideology, the promotion of so-called homosexual “marriage,” the early sexualization of children in preschool, contrary to legitimate parental rights, and finally the attempt to turn abortion into a human right through legislation.
The pressure groups and individuals promoting this agenda probably thought it would be easy to bring about, and they have achieved many victories, but those resisting this agenda are getting increasingly well organized. A few months ago on January 19, 40,000 people took to the streets in Paris in order to raise their voices against abortion, euthanasia and other anti-life practices. Further demonstrations have already been planned. The French people became alarmed because the socialist president, F. Hollande, forced on them aggressive anti-life policies. More than one million people have demonstrated on the streets multiple times in order to protest against homosexual “marriage.”
At the same time the Veilleurs, mainly young students and their sympathizers, have given witness to the dignity and beauty of life, despite repressions, through their quiet, peaceful sit-ins in the middle of Paris during the night. In other European countries such as Belgium, Czech Republic and Romania, major pro-life rallies were held successfully.

The piece concludes with these words: “The great Cardinal John Henry Newman used to say: The tide will turn. Yes, that is true. For the truth remains the truth, and the truth is stronger than all lies.” Yes quite right. And it does not take the masses to turn things around. As Alexander Solzhenitsyn put it: “The simple step of a courageous individual is not to take part in the lie. One word of truth outweighs the world.”

So Europe is in many ways one big cesspool. But as long as God is on the throne, and his people champion the truth, anything is possible – even a renewed and revived Europe.