In what may be one of my last theological travelogues as part of my European and English travels, I have another odd title, filled with seemingly eclectic and mismatched items. But these items do in fact cohere in various ways. Let me explain. 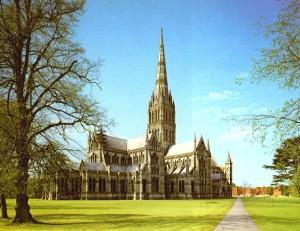 We went to the magnificent Salisbury Cathedral yesterday in southern England. Built in the 1200s, it is a remarkable structure, originally built for the glory of God. Today however English Christians are quite concerned about the theological direction its leadership is headed in.

The district itself is a politically conservative part of England, but the Bishop of Salisbury, Nicholas Holtam, appears to be a raging leftie, and a champion of all things unbiblical, such as homosexual marriage rights. Like so many other church leaders in the UK, he seems to have totally sold out the gospel and embraced fully the values and ideology of the world.

The new Archbishop of the Canterbury, Justin Welby, has already capitulated big time to the homosexual agenda, saying the fight for marriage is over, and actually jumping in bed with the homosexual militant group Stonewall to target “homophobia” in schools.

The church in the UK is just about on its deathbed, and the nation looks to have been abandoned by God – Romans 1 style. But again, I have been encouraged to meet brave resistance fighters scattered throughout the land, who have not bowed the knee to Baal.

But back to Salisbury Cathedral. In it you can see one of the four original copies of the Magna Carta, or the Great Charter. It dates back to June 1215, and next year we will celebrate its 800th anniversary. This of course was a vitally important document, enshrining the rule of law over against human tyranny, including the rule of kings.

Common law means a legal system based upon the English legal system; a mixture of customary law, judge-made law and parliamentary law. At least until the early 19th century, the common law was heavily influenced by Christian philosophy. This philosophy argues that there is a divine reason for the existence of fundamental laws, and that such laws are superior to human-made legislation, thus reflecting universal and unchangeable principles by which everyone should live. This assumption was expressed, among other things, in the Magna Carta of 1215, a charter which guaranteed the basic rights and privileges to the English barons against the king. Professor Aroney explains Christianity’s ideological influence upon the Magna Carta:
From [the time of Alfred] the kings of England have traditionally recognised their submission to God. At their coronations they take an oath before the Archbishop acknowledging the Law of God as the standard of justice, and the rights of the church. They are also urged to do justice under God and to govern God’s people fairly. Magna Carta was a development of these themes.

In the display at the Cathedral, I noticed how its modern interpreters had certainly eliminated any notion of the law above the law being God’s law, and how they were seeking to turn this into an instrument of trendy social justice policies. It had a display about women’s rights, and I told my host that they would likely soon have a homosexual rights bit added to the display.

I told him that I can almost guarantee the homosexual activists will seek to hijack this anniversary for their own radical purposes. They will claim the Magna Carta really had homosexual rights in mind, and that all who oppose their agenda must be targeted by the full force of the law.

And given that the current leadership of this historic Cathedral are already playing fast and loose with this great document, I have no doubt that they will fully promote the homosexual agenda next year. The English church is so in line with the homosexual agenda anyway, that nothing would surprise me here.

Indeed, the entire longstanding common law tradition, based on biblical Christianity, is now being wiped out, both by rampant secular leftism in the UK, and by the EU which is riding roughshod over the English law system. The number of horror stories I have heard about Christians especially being targeted by the law, including homeschoolers and those seeking to resist the homosexual agenda, or expose the various paedophile rings, and so on, have been utterly horrific.

England is now an incredibly darkened and demonic place, with so much intense hatred of all things Christian. It is very difficult indeed for biblical believers to stand strong at the moment. Nonetheless, I have met many of these champions of the faith, pinpoints of light in a very black place, who are fighting the good fight.

But one after another they are being sued, harassed, bullied, pursued by the police, or taken to task legally by the secular lefties. This is really leading to full-scale persecution of true Christians. I thought things in Australia were bad, but they are even worse in the UK.

So please pray for the remnant of believers who are seeking to stand strong here. They are few and far between, but they are some of the boldest and bravest believers I have found. They know how dire things are, and they are still holding firm.

There is a real separation of the sheep from the goats here. There is the apostate church, and there are the handful of true disciples scattered here and there. The secularisation of England means it is now a decrepit and moribund nation. As one of the great champions of the faith, and a close friend here has just recently said:

Great Britain is only a name on old maps. Though it might still wear the outer garments that identify it from other nations, these are now old, threadbare and peeling, barely distinguishable. What now lies within is a monstrous politically correct parasite that feeds off its host body. It is feeding time! Come all the homosexuals of the world and Islamists, engorge yourself whilst there is still something to devour, before moving to feed off another once great nation – perhaps Australia and the USA?
Deuteronomy chapter 28, speaks powerfully across the millennia to the British.

9 Replies to “The Magna Carta, Salisbury, the Rule of Law, and Christianity”