Oxford, like England, like Europe, is steeped in history. These places have been around for a long time now. The city of Oxford of course goes way back, but it may be best known for Oxford University, which was established in the 1100s.

In the past few days we have been fastidious and resolute in seeing as much of this amazing place as our poor legs and feet have allowed. Thankfully it is not as large as London, or Amsterdam, or Rome. And we still have a few more days to check out even more of the area, including, hopefully, the nearby Blenheim Palace. 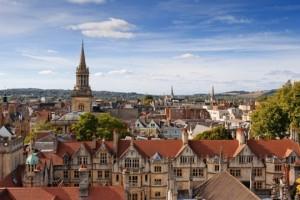 There are dozens of colleges which are part of this great university. The names are very famous indeed, names such as Exeter, Trinity, Jesus, Queens, Corpus Christi, Balliol, Keble, Pembroke, All Souls, St. John’s, and so on. If the names themselves do not make clear the Christian heritage of this university, the fact that all the colleges have a chapel should.

And these chapels are not just add-ons, but the very heart and soul of the colleges. Christianity was everything when this school was first established – as for much of its history. Learning for the sake of learning would have been unheard of back in the old days of this institution – it was all about learning for the glory of God.

Like most of the great universities of old, these schools were established to promote the Christian faith. The motto of Oxford University is Dominus Illuminatio Mea – “The Lord is my Light”. And for centuries it did enlighten the world with the Christian faith.

Just think of the many great students and teachers who have been there through the centuries, men such as John Wycliffe, John Wesley, J. R. R. Tolkien and C. S. Lewis, to name but a few. Of course today, we may think of a Richard Dawkins as much as a famous Christian philosopher when reflecting on Oxford.

Indeed, walking through the streets the past few days we saw a real mishmash of worldviews and ideologies on display. On one street there was an American evangelist sharing the gospel. On another street were the Socialists handing out literature for the forthcoming EU election, claiming they would “abolish money”!

I was tempted to hand them a five pound note and say it was a contribution to their cause, and then watch if they avidly pocketed the cash, or ripped it to pieces! But I won’t here belabour the silliness of such proposals and such groups.

We also went to see the Martyrs’ Memorial, which is a tribute to the deaths of three famous Protestants in 1555. The three martyrs were the Anglican bishops Nicholas Ridley, Hugh Latimer, and the Archbishop of Canterbury, Thomas Cranmer.

I thought about these three, and how unlikely similar deaths would befall the current crop of church leaders in England. Most of them seem to be so theologically liberal, and so in bed with the radical homosexual agenda, that they will never know a martyr’s death – not in today’s PC climate at any rate.

Those who will likely meet such a fate are the few remaining resistance fighters. I have been meeting these great saints throughout England since being here, and I met another one today. This brave soul has known horrific persecution, vilification, hatred and death threats simply for affirming heterosexual marriage.

Since being here, I have noted what an utter stranglehold the homosexual militants have on the UK. They have complete and total freedom to push their agenda, while Christians are cowering in fear (if not siding with the enemy). The homosexual hegemony here is just so frightening and troubling to behold.

So if any Christian will again be burned at the stake, it will not be the mealy-mouthed and spineless wonders amongst the church leadership here, but the few brave men and women who refuse to bow the knee to Baal, and are standing strong, despite all the horrible abuse and attacks.

But let me return to C. S. Lewis. His is of course a name now forever associated with Oxford. He taught there for many years; he lived quite nearby at The Kilns in Headington; and was one of the university’s most famous sons. Of course Tolkien was there as well. While he taught at Merton College, Lewis spent many years at Magdalen College.

We walked through there this afternoon, and could see at least from the outside the rooms he used while there, and we spent more time walking about this amazing place, so steeped in rich history. Of course we also went to the nearby Eagle and Child pub (“The Bird and the Baby” as Lewis and his small group of literary heavyweights, the Inklings, often referred to it).

We had to make some great sacrifices while there, so we had a fish and chips lunch, along with a pint of ale to give our honours to the great apologist and writer. (Those wanting more of the somewhat warm English ales will also want to visit the Turf Tavern, said to be the oldest one here, established around the 1200s.)

We also made a point of visiting, and in fact standing in the middle of, University Church of St. Mary, where Lewis gave his famous address, “The Weight of Glory” on June 8, 1942. It may be fitting to end on this high note, and quote just a bit of it. The written form of this is found in various collections of his works. Here is the concluding portion of it:

Meanwhile the cross comes before the crown and tomorrow is a Monday morning. A cleft has opened in the pitiless walls of the world, and we are invited to follow our great Captain inside. The following Him is, of course, the essential point. That being so, it may be asked what practical use there is in the speculations which I have been indulging. I can think of at least one such use. It may be possible for each to think too much of his own potential glory hereafter; it is hardly possible for him to think too often or too deeply about that of his neighbour. The load, or weight, or burden of my neighbour’s glory should be laid daily on my back, a load so heavy that only humility can carry it, and the backs of the proud will be broken. It is a serious thing to live in a society of possible gods and goddesses, to remember that the dullest and most uninteresting person you talk to may one day be a creature which, if you saw it now, you would be strongly tempted to worship, or else a horror and a corruption such as you now meet, if at all, only in a nightmare. All day long we are, in some degree, helping each other to one or other of these destinations. It is in the light of these overwhelming possibilities, it is with the awe and the circumspection proper to them, that we should conduct all our dealings with one another, all friendships, all loves, all play, all politics.
There are no ordinary people. You have never talked to a mere mortal. Nations, cultures, arts, civilization—these are mortal, and their life is to ours as the life of a gnat. But it is immortals whom we joke with, work with, marry, snub, and exploit—immortal horrors or everlasting splendours. This does not mean that we are to be perpetually solemn. We must play. But our merriment must be of that kind (and it is, in fact, the merriest kind) which exists between people who have, from the outset, taken each other seriously – no flippancy, no superiority, no presumption. And our charity must be a real and costly love, with deep feeling for the sins in spite of which we love the sinner—no mere tolerance or indulgence which parodies love as flippancy parodies merriment. Next to the Blessed Sacrament itself, your neighbour is the holiest object presented to your senses. If he is your Christian neighbour he is holy in almost the same way, for in him also Christ vere latitat – the glorifier and the glorified, Glory Himself, is truly hidden.