There are two very clear things that can be said about opposition:

-if you are a Christian worker seeking to make a difference for the Kingdom, you can count on opposition;
-there are times when such opposition must be challenged head on.

Now that I have laid out my general thesis, let me clarify a bit what I mean by this, and provide a bit more meat to the bones here. The first thing I should mention is that it goes without saying that if you are a Christian seeking to share your faith and be salt and light in a needy society, of course you will be opposed.

Those who do not know Jesus will surely oppose the things of God. But that is actually not the opposition I wish to speak about here. I am referring to opposition from those who claim to be God’s people. This is the really shocking but harsh reality any faithful servant of Christ will find to be true. 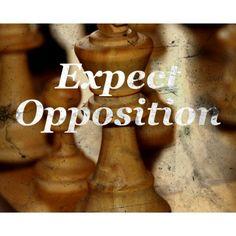 No matter how pure the motivation, no matter how sincere the heart, no matter how close to God and faithful to his will these believers are, they will find other Christians opposing them – often quite harshly. One simply has to read about the Old Testament prophets and how they were regularly rejected and scorned by God’s people.

Jesus of course came to his own, and his own received him not (John 1:11). And the early disciples found themselves again and again facing resistance and opposition from those who were supposed to be on side. A look at church history also reveals this.

Indeed, it is because I am now reading a biography about George Whitefield that I am reminded of this sad reality. Here was one of God’s choice saints, a wonderful evangelist and man of God, yet he had plenty of Christian critics and opposition. Plenty of pastors and churches opposed him and gave him a hard time.

It is heartbreaking to see such fierce and obviously demonic opposition coming from other sections of the church, and from other church leaders. It seems the rule of thumb is this: the more determined a man of God is to preach the gospel, the more opposition he will have to endure – even from his own people.

And we find this always being the case. Think of other well-known preachers, Christian workers and evangelists – they too knew all about Christian opposition. Whether it was Finney, or Wesley, or Booth, or Wilberforce, or Billy Graham, they all faced fierce criticism and opposition from other Christians.

So that is our first truth: those doing God’s work cannot avoid such opposition – it seems to go with the territory. Indeed, Jesus promised us this would be the case, so why should we be surprised? I realise that such constant criticism and resistance can take its toll, and many Christian workers simply give up because of it.

But Jesus experienced more ugly opposition than any of us will likely know about, but he persevered to the end. He did not give up. He kept going, in spite of all the resistance. And it’s a good thing too. So we must do the same. Sometimes we just have to ignore the critics and keep on keeping on.

But sometimes we cannot just ignore our opponents. Sometimes we must resist them, especially when the very heart of the gospel is at stake. This is another important truth we must all learn. When other people of God are actually denying or distorting the gospel, they must be opposed.

It does no good to simply ramble on about ‘unity at all costs’ in such circumstances. It does no good to offer unbiblical notions of love and acceptance here. When the very gospel is under threat, then we of course must stand up for it, and resist those who are doing great harm.

The Bible is full of this truth. Just consider one New Testament book – the book of Galatians. Here Paul deals with very real opposition – and in the strongest of terms. Soon after Paul had established the church in Galatia, some false teachers had come in who began to “trouble” (1:7) and “unsettle” (5:12) the new Galatian believers.

And he also chewed out the Galatians for allowing these wretched teachings to take a foothold amongst them. As we read in 3:1-3: “You foolish Galatians! Who has bewitched you? Before your very eyes Jesus Christ was clearly portrayed as crucified. I would like to learn just one thing from you: Did you receive the Spirit by the works of the law, or by believing what you heard? Are you so foolish?”

So Paul was not in the least interested in some polite public relations diplomacy here. He especially tore into these false teachers with a vengeance. Indeed, so strong was he, that if he was around today saying such things, he would be accused by most Christians of being unloving, harsh and judgmental.

They would actually oppose Paul! These weak-kneed evangellyfish would complain about Paul’s unloving and unChristlike style, and condemn him for being so black and white. “Paul, you are being way too harsh and critical here. Where is the love? Where is the grace? You are not representing Christ here. Chill out Paul!”

But this whole book is full of Paul’s very strong words of rebuke. Paul knew this error had to be resisted in the strongest of terms, or it would cause horrendous damage. Recall how he even said that he had to rebuke Peter to the face – and in public no less! As Gal. 2:11 puts it: “When Cephas came to Antioch, I opposed him to his face, because he stood condemned.”

The issue of circumcision and the false gospel is of course dealt with very harshly throughout this book. Consider just one more of the rather “unloving” and “uncharitable” things he said, in 5:10-12: “The one who is throwing you into confusion, whoever that may be, will have to pay the penalty. Brothers and sisters, if I am still preaching circumcision, why am I still being persecuted? In that case the offense of the cross has been abolished. As for those agitators, I wish they would go the whole way and emasculate themselves!”

Regrettably we just do not realise how utterly harsh, strong and cutting (no pun intended) that last line really is. It is in fact an utterly shocking thing to say. Paul tells these guys who are pushing circumcision to go all the way, and lop off their own private parts!

As mentioned, if Paul were around today and wrote that sort of stuff, the majority of our church mice and invertebrate weenies in the pulpits and the pews would have condemned him for this, and told him he simply cannot say such things and be a good loving Christian.

Well sorry to all those pansies out there, but Paul wrote what he did by the inspiration of the Holy Ghost. What was at stake was so important, that only the strongest and most strident of language would do here. He did not give a rip about the girly men who would get bent out of shape about a bit of strong rhetoric.

What he did care greatly about was the gospel, and the wellbeing of the Galatians. Just last night I was flipping through one of Tom Wright’s popular-level commentaries, and I came upon his words on this very passage. What he has to say is well worth sharing here:

“If this language, and indeed the whole paragraph, seems to us quite violent and strident, that may perhaps be an indication that church people and theologians can easily become so affable, so friendly, so ‘nice’ to everybody that we fail to confront head-on false teachings that can do lasting damage to churches and individual Christians. Anyone who has struggled for the life and soul of a Christian community against insidious opposition will know exactly what Paul was facing. And maybe the only way we can get our message through is by vivid language, multiple imagery, not just keeping people awake but shocking them into seeing what the real issues are.”

Exactly right. Some things are just too important to namby-pamby around with. Paul knew how serious this was, and he did not allow it to go on by being “nice” and “tolerant”. So the lessons here are twofold: opposition will always come when you are doing God’s work.

And sometimes, depending on the situation, that opposition must be gainsaid, refuted and resisted. Whenever the very core of the gospel is at stake, we have no other choice. As J. C. Ryle warned, “Never let us be guilty of sacrificing any portion of truth on the altar of peace.”