‘From mainline to sideline’ is a commonly used description of American mainline Protestant denominations which have made themselves utterly irrelevant, ironically, by seeking to be relevant. These older denominations are dying because they thought they could jettison the core teachings of the gospel, and instead run with every trendy lefty cause that is out there.

So instead of preaching Jesus Christ and him crucified, such theologically liberal denominations spend all their time blasting America, the West and capitalism while pushing abortion rights, sodomy rights and every other leftist agenda item. As a result of all this, the membership of such denominations is plummeting, and they offer real spiritual seekers absolutely nothing. 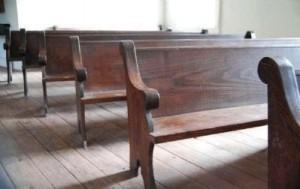 We have seen all this played out again in America with the PCUSA. This Presbyterian denomination has decided to embrace just about every anti-biblical position there is, thus marginalising itself even further. At the church’s biennial general assembly meeting last week it decided to promote homosexual marriage, abortion rights, and engage in mindless anti-Israel foolishness.

In the light of all this, Mark Tooley was quite right to say, “Presbyterians Become the Silly Church”. Of course all this did not happen overnight. It has been going on for a century now, and especially came to the fore in the 60s. He writes:

Sexual liberalism captured the denomination in 2010, when the PCUSA voted to abandon its expectation of monogamy in marriage and celibacy in singleness for its clergy. Since then, hundreds of congregations have quit, organized conservative resistance largely stopped, and the 2012 General Assembly was expected to authorize same sex unions but fell short. In just the last two years, the PCUSA lost nearly 200,000 members, a rate, which if continued, would mean no more PCUSA in less than 20 years.
In fact, the exodus from the PCUSA after the marriage vote may increase for congregations and individuals. Many exiting PCUSA churches have joined the Evangelical Presbyterian Church, while others helped create a new denomination called the Covenant Order of Evangelical Presbyterians. Despite the impact on denominational finances, PCUSA elites, committed more to the Left than to the church’s health, seem mostly indifferent.

He concludes with these words:

Although church liberals love to insist their policies appeal to the rising generation, all of the available evidence indicates just the opposite. Liberalizing churches don’t attract young people, who, even if themselves liberal, tend to flock to churches they respect for not pandering to them. The same is true for racial minorities, who largely avoid liberal Mainline Protestantism in favor of ethnic or Evangelical churches.
Essentially, the PCUSA, by its votes this week, resolved to become even smaller, older, and whiter, creating a future that depends more and more on endowments instead of live people. Despite the gyrating, balloons, and often-vacuous debates, followed by wrongheaded votes, the PCUSA deserves some sympathy. It represents the faded vestige of a once distinguished religious body that indelibly shaped America. Rest in peace, PCUSA, and thanks for the memories.

Indeed, all this is sheer madness on the part of PCUSA. It seems as they keep trashing key biblical teaching and morality, they also undergo major mental meltdowns. They just can no longer think straight it seems. And it is not just their apostasy when it comes to allowing church leaders to perform homosexual marriages.

As to their abortion decision, Steven Ertelt puts it this way: “The Presbyterian Church USA has voted to endorse Kermit Gosnell. Delegates meeting in Detroit at the 221st General Assembly of the 1.8 million–member Presbyterian Church (USA) voted down a measure that would have the church endorse care for babies born alive after abortions.”

You come to Israel, and you see the one democracy that upholds basic human rights, that guards the rights of all minorities, that protects Christians. I would suggest to the Presbyterian organizations — fly to the Middle East. Come and see Israel for the embattled democracy that it is, and then take a bus tour. Go to Libya, go to Syria, go to Iraq — and see the difference. And I would give them two pieces of advice — make sure it is an armor-plated bus and, second, don’t say that you’re Christians…. Christians are persecuted throughout the Middle East. So most Americans understand that Israel is a beacon of civilization and moderation.

Back in 2008 Joseph Bottum wrote The Death of Protestant America: A Political Theory of the Protestant Mainline. At the end of his review of this volume Al Mohler said this:

The health of the church is a far greater concern than the health of the nation. The primary injury caused by mainline Protestant decline is not social but spiritual. These denominations once fueled the great missionary movement that carried the Gospel to the ends of the earth. Now, liberal Protestantism sees conversionist missions as an embarrassment. Committed to a radical doctrinal relativism, these denominations have served as poster children for virtually every theological fad and liberal proposal imaginable. Now, many of these denominations are involved in court fights to keep churches from leaving. The stream has indeed run dry.
The “Death of Protestant America” Joseph Bottum describes must serve as a warning to Evangelicals. There can be no doubt where theological revisionism and accommodationism will lead. Why, then, would some argue that Evangelicalism should follow essentially the same path? Can they not see that the liberal Protestant river has run dry?

So what should you do if you still happen to be in the PCUSA? The advice of Michael Brown sounds about right to me:

If you are a Jesus-loving, Bible-based member of the Presbyterian Church (U.S.A.), unless God has called you to stand as a prophetic voice of rebuke to the denomination, or unless your ministry commitments to individuals make it impossible for you to leave, now is the time to make your exit. The PCUSA has made its rejection of the Word of God official.