OK, I confess – I just cannot keep up with all the mad dog PC lunacy and stealth jihad overtaking this nation. It seems every time I post an article about creeping sharia and brain-dead PC leftism, another few news items come along, even more bizarre and disgusting than the previous ones.

No sooner had I written about the Australia Post debacle (coughing up millions for an Islamic mosque), when two new stories appear from Sydney that leave me reeling. And anyone concerned about our fast-fading freedoms here should be gobsmacked at this insanity as well. The first one has to do with pro-jihadist clothing being openly displayed and sold on the streets of Sydney:

Islamic fundamentalists in south-western Sydney are wearing propagandist paraphernalia freely available for sale at local markets and online to show their support for jihadi bloodshed. Shirts and hoodies with rifles, pistols and fanatical slogans are being seen more regularly in Western Sydney, including Auburn and Granville — two suburbs where a number of the reported 150 Australians engaged in the sectarian violence in Syria and Iraq are believed to be from.
DA1 Custom Clothing, a company registered at Auburn, has stalls at the Auburn Markets and Granville Family Festival and sells its merchandise online. The Islamic Brotherhood hoodie has become popular, with Shahada scripture supporting one Islamic nation for all people. Other items include a shirt bearing two pistols and the words “Submit to None But One” and Islamist headbands and flags.

One newspaper editorial rightly took these money-making jihadists to task. It begins:

Local Islamic fundamentalists have unveiled their winter fashion range, featuring an array of garments decorated with their favourite themes: warfare, bloodshed and extremist calls to arms. This is another manifestation of the seething fundamentalist undercurrent in Sydney’s West that has seen more than 100 Australian citizens leave our country to fight in Syria and Iraq.
The slogans and images on these garments leave little doubt about the views of those who sell or wear them. “Submit to None But One” reads the text on one shirt, referring to Islam’s primacy over other religions and laws. Other garments display rifles and guns. These clothes could probably be ignored as offensive but harmless posing if it were not for the fact that so many in our Islamic community are taking up arms for extremist causes overseas. Since last year, six young Sydney men have reportedly been killed in Syria during armed confrontations with other Muslims.

My second example is just as shocking and mind-boggling. Tell me it just ain’t so. But sadly and incredibly it does appear to be so. It has to do with the upcoming Festival of Dangerous Ideas to be held at the taxpayer-subsidised Sydney Opera House.

There has always been a lot of rot presented there over the years – all the usual PC trendy left moonbattery in fact. But one of the presentations this year is a real shocker. Here is how one paper broke this story today:

A speaker at the upcoming Festival of Dangerous Ideas will seek to defend so-called honour killings – the murder of women deemed to have brought shame or dishonour on their family. Uthman Badar, a Sydney-based Muslim speaker, writer and activist, will deliver a presentation titled “Honour killings are morally justified” and argue that such acts are seized on by Westerners as a symbol of everything they dislike about another culture.
The announcement sparked condemnation on social media from those arguing the Opera House stage should not be used as a platform for such radical and confronting propositions. “This man is being given a platform at a reputable event to apologise for the murder of women,” wrote lawyer Steve Hind on his blog, calling for a boycott. Mr Badar is speaking alone and will not be debated by an opponent. 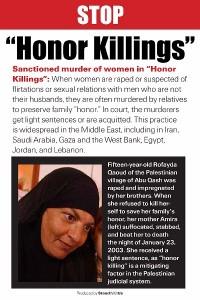 Yep, sure enough – just go to their website and we find this writeup of his talk:

For most of recorded history parents have reluctantly sacrificed their children—sending them to kill or be killed for the honour of their nation, their flag, their king, their religion. But what about killing for the honour of one’s family? Overwhelmingly, those who condemn ‘honour killings’ are based in the liberal democracies of the West. The accuser and moral judge is the secular (white) westerner and the accused is the oriental other; the powerful condemn the powerless. By taking a particular cultural view of honour, some killings are condemned whilst others are celebrated. In turn, the act becomes a symbol of everything that is allegedly wrong with the other culture.

I kid you not folks. And check out the accompanying biographical blurb of this guy:

Oh, OK, he wants to see the Islamic Caliphate re-established. No wonder he favours honour killings. This is all part of how Islam spreads and maintains its power. It has always been by the edge of the sword, and it especially has been horrific for any poor women who happen to stand in the way.

And yet these clowns in Sydney are actually giving this guy a platform to espouse his views? Just what am I missing here. Here we have a political ideology which has sworn that it intends to kill us, keep women as second-class citizens, and destroy freedom and democracy across the world – yet the enlightened tweebs in Sydney want this position to get free air time.

I think we have already lost the war if that is the case. Sydney and Australia are already part of the universal caliphate. We have lost, and we didn’t even know a war was going on. Hitler and Stalin would have been so very jealous about how the West has been so easily and effortlessly defeated.