First the good news: the hardline Islamist who was going to speak on the morality of honour killings has been given the boot. This partially tax-payer funded event was to happen in a few months at Sydney as part of the Festival of Dangerous Ideas. Fortunately because of people power and a large public outcry, this lousy show has been cancelled.

See my original write-up about this outrage here: billmuehlenberg.com/2014/06/24/festival-of-deadly-dhimmi-ideas/

I was among the first to make a really big stink about this, and urge others to do the same. It all seems to have paid off. A short FB message from the Sydney Opera House (a sponsor, along with the St James Ethics Centre) appeared soon after:

Sydney Opera House statement on cancellation of Uthman Badar’s session at Festival of Dangerous Ideas 2014: The Festival of Dangerous Ideas is intended to be a provocation to thought and discussion, rather than simply a provocation. It is always a matter of balance and judgement, and in this case a line has been crossed. Accordingly, we have decided not to proceed with the scheduled session with Uthman Badar. It is clear from the public reaction that the title has given the wrong impression of what Mr Badar intended to discuss. Neither Mr Badar, the St James Ethics Centre, nor Sydney Opera House in any way advocates honour killings or condones any form of violence against women.

But now the bad news: Ever since I have spoken about this honour killing talk, I have had plenty of Christians actually come out defending the guy – really. These guys ramble on about ‘we need to hear what he has to say’ and ‘freedom of speech is important’ and ‘we can’t condemn him until we first hear him’ etc, etc.

Oh puh-leeese. No wonder we keep losing here! These folks are utterly clueless as to what Islam is all about, what this radical Islamist is all about, and what real freedom is all about. Guess what dudes: Free speech ends when people want to slice off your heads or burn you with acid. Sorry folks, let’s get real here.

There is never a place for allowing some guy to come around and tell us honour killings are just peachy keen. One might as well argue that we need to give Hitler just one more go here. We need to hear what he has to say. Yeah, let’s hear that again about how we need to massacre all Jews and set up a pure Aryan race.

What more do we need to learn here? For heaven’s sake, we have 1400 years of the political ideology of Islam with well over 200 million killed. How much more do we need to know about it!? Respectfully these guys may need to get a bit informed about Islam – and soon! 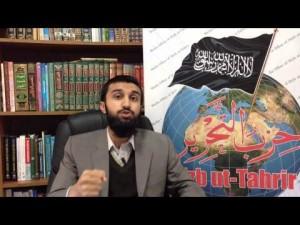 But if these guys can’t do the hard slog of actually doing a bit of research about this mug, then let me help them out a bit here. As I say, we already know all about Uthman Badar and his group Hizb ut-Tahrir. Well, I do at least.

Perhaps before these guys wax eloquent in their defence of this maniac, they should know what they are talking about. So let me give you just a snippet about this guy. I have been following him for years, and he is a really nasty piece of work.

The truth is, Hizb ut-Tahrir is so radical that it is in fact banned in parts of Europe and the Middle East. Let me just offer a bit of commentary from a 2011 article:

Terrorism experts also warned the group’s activities were “cause for concern”, but said that moves to outlaw them could force their activities underground and make them more appealing to marginalised Muslim youth. Attorney-General Robert McClelland yesterday put the group on notice, saying “any group or individual that promotes violence against Australians should be condemned”.
“The government takes a hard line against groups that advocate terrorism and will act upon advice from its security agencies as to whether they should be proscribed,” he said. Hizb ut-Tahrir spokesman Uthman Badar yesterday defended the group’s draft constitution for their proposed Islamic state, despite it demanding that Muslims who leave the religion “are to be executed” while all males aged 15 or over were “obliged to undergo military training in readiness for jihad”. “Our view is that we adopt the Islamic positions on all these issues,” Mr Badar said.

And he is the same guy who said Australian diggers in Afghanistan are fair game: “You have no business in interfering with the people of the Muslim world. Military occupation should be resisted militarily. People there have a right to resist.”

Nice guy. But these clueless wonders still carry on: ‘Well, we don’t want to turn him into a martyr by cancelling his show’. Martyr smartyr. If I had announced a seminar on the moral justification for decapitating all Muslims in the neighbourhood, it would be pulled, pure and simple – and I would be arrested.

The truth is, the powers that be should also be railing at the bozos at the SOH and St James “Ethics” Centre for giving this show the green light in the first place. Ethics? What ethics? Dhimmi ethics it seems. Heads should be rolling here. Why in the world did these guys allow this to go ahead?

Now that the story has well and truly broke, some voices of sanity are starting to be heard. Says Miranda Devine:

Uthman Badar, the group’s spokesman, was invited to the prestigious Sydney Opera House event in August to deliver a speech titled: “Honour killings are morally justified.” Seriously. Murdering women is not a dangerous idea – it’s a crime.
After pressure from the NSW government, the Opera House last night cancelled the speech, claiming “a line has been crossed”. But why did it and Festival partner, the St James Ethics Centre, offer a platform to Islamist extremists at all? There simply is no justification for the murder of women by relatives who feel she has dishonoured the family, by, say, being raped.
Some ideas in the world really are dangerous, and you only have to look at the horrors unfolding in Syria and Iraq to know that radical Islam is as bad as they come. But to Festival organizers, it was all a game. By inviting Hizb Ut Tahrir to join the rest of the luvvies on stage they made Islamist extremism fashionable. We have trouble enough on that score.

The government has vowed to cancel the passports of homegrown jihadists. But, without proof of terrorist activity, it will be tricky to stop Australian citizens coming home. Just look at the public furore supporting David Hicks, a homegrown jihadist of an earlier generation.
In the end, we have to rely on the skill of our police, and their good relations with the majority of moderate Muslims, who have as much at stake as anyone in stopping the radicalisation of their youth. But what hope is there when Sydney’s fashionable left-wing establishment fetes extremism, as if it is just another dinner party conversation starter.

And a newspaper editorial chimed in:

As a means of controlling and oppressing women, the spectre of honour killings is grotesquely effective. Such brutality has no place anywhere on earth, be it the mountains of Pakistan or the villages of Syria. It certainly has no place in Sydney. The organisers of this utter disgrace may congratulate themselves on winning media attention. Perhaps that was the aim all along.
But media attention will eventually fade, and those organisers will have to live with the fact that they intended to elevate the slaughter of women and girls to the very centre of Sydney’s cultural life. The decision by the Opera House last night to cancel the speech was a victory for commonsense. All it took was for the right-thinking people in the community to speak up.

So yes, some heads should roll here. And maybe some of the clueless Christians should learn to at least do a bit of homework before defending such lunacy. No wonder we keep losing and Islam keeps advancing. When we have rather uninformed Christians doing the work of the jihadists, then we have already lost.

I must say, I despair greatly over radical Islam and stealth jihad. But I may despair even more about Christians who simply do not have a clue – and don’t seem to want to have a clue either.