There is no greater persecution being experienced today than that of Christians. A recent report by the Pew Research Center found that “Christians continue to be the world’s most oppressed religious group, with persecution against them reported in 110 countries.” This should come as no surprise to globally-aware Christians.

Christians have always been the subject of persecution, repression and hatred. But if anything, it seems to be getting worse of late. And the number one reason for such persecution of course is the political ideology of Islam. More Christians are tortured, imprisoned and killed by Muslims than by anyone else. But of course atheist regimes are doing a pretty good job here as well.

The numbers speak for themselves, and are most revealing. Consider as but one example the hellhole that is atheistic North Korea. Most people suffer there big time, but especially the Christians. One short article about recent public executions there is most disturbing:

Tragic news coming from North Korea today. According to South Korean newspaper JoongAng Ilbo, as many as 80 people were publicly executed in North Korea this month for minor offenses such as owning a Bible. The alleged “criminals” were put to death in seven cities across North Korea, averaging ten per city. The victims had their heads covered by white bags, were tied to stakes near a stadium, and shot by authorities repeatedly with machine guns. North Korean officials forced a crowd of over 10,000 people, including children, to witness the killings.
“I heard from the residents that they watched in terror as the corpses were (so) riddled by machine-gun fire that they were hard to identify afterward,” the JoongAng Ilbo source said. The massacre marks the first time during Kim Jong-un’s reign where public executions have taken place, a troubling sign for the future of the totalitarian country. Government officials suggest that the executions were meant to quell the recent spread of capitalism in various cities across North Korea. North Korean law permits executions for conspiring to overthrow the government, treason and terrorism. But the country has also been known to order public executions for minor infractions such as religious activism, cellphone use and stealing food, in an effort to intimidate the public. 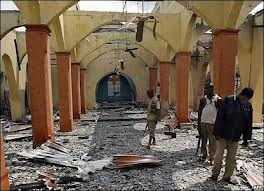 Consider also Open Doors International which has released a Top 10 Violence List of countries in which Christians have experienced the most violent persecution for their faith in Jesus Christ. It documents just how great a price believers around the world are paying for their faith:

“The World Watch Top 10 Violence List, which is based on persecution incidents between Nov. 1, 2012, and March 31, 2014, is topped by Nigeria. The others, in order, are: Syria, Egypt, Central African Republic (CAR), Mexico, Pakistan, Colombia, India, Kenya and Iraq.”

“Of the overall compilation of 5,479 Christians killed for their faith around the world, Nigeria, Syria and CAR make up 85 percent of the total. The estimated average of Christians killed for their faith per month in the reporting period is 322. Researchers say the total number of martyrs is ‘a very minimum count and could be significantly higher’.”

It says this about North Korea:

Observers might be surprised to find North Korea, the 2014 World Watch List’s No. 1 country as the worst persecutor of Christians, absent from the Top 10 Violence List. “When it comes to counting the numbers of Christians martyred, it is impossible to get an accurate number for North Korea,” says Jan Vermeer, Open Doors field worker for North Korea. “This is not because there are no Christians being killed for their faith. It is a fact that thousands of Christians are starved, abused and tortured in North Korean’s extensive prison system. But due to an inability to derive sufficiently accurate figures about the reasons for killing Christians in this most secretive society, North Korea is excluded from the total number of killings.”

It is clear from this report just how much of this persecution is coming from the Muslim world. Raymond Ibrahim picks up this angle in a recent article, and is worth quoting at length, as he examines the Open Doors data:

The one glaring fact that emerges from this report is that the overwhelming majority of Christian persecution around the world today is being committed at the hands of Muslims of all races, languages, cultures, and socio-political circumstances: Muslims from among America’s allies (Saudi Arabia) and its enemies (Iran); Muslims from economically rich nations (Qatar) and from poor nations (Somalia and Yemen); Muslims from “Islamic republic” nations (Afghanistan) and from “moderate” nations (Malaysia and Indonesia); Muslims from nations rescued by America (Kuwait) and Muslims claiming “grievances” against America (fill in the blank __).
A common denominator, a pattern, exists, one that is even more extensive than Open Doors implies. According to that organization’s communications director, Emily Fuentes, “of the 50 worst nations for persecution, 37 of them are Muslim,” or 74%. In fact, while this number suggests that the other 13 countries making the top 50 are not Muslim—for example Kenya and Ethiopia—those doing the persecution there are.
In other words, those persecuting Christians in 41 of 50 nations are Muslims; that is, a whopping 82% of all persecution around the globe is being committed by the adherents of Islam—sometimes in Christian majority nations; for example, the Central African Republic which, after the 2013 Islamic takeover, now ranks #16, “severe persecution” (the Christian-majority nation did not even appear in the previous year’s top 50).

He looks more closely at atheistic versus Islamic persecution:

Christian persecution by non-Muslims (mostly communists) is often rooted to a temporal regime or ideology. Conversely, Muslim persecution of Christians is perennial, existential, and far transcends this or that regime or ruler. It is part and parcel of the history, doctrines, and socio-political makeup of Islam—hence its tenacity; hence its ubiquity.
Still, the significance of all this is often overlooked. Thus, “Dr. David Curry, CEO and president of Open Doors USA, told The Blaze ‘Not every circumstance is the same. For example, in North Korea, you have a quasi-Stalinist government that is the most difficult place to call yourself a Christian on the planet — and has been for the last 12 years,’ he noted. But while North Korea’s government is the real culprit, in places like Iraq, ‘roving extremist groups’ are waging attacks against Christians, while government officials are seemingly powerless to stop the carnage, he explained.”
True; but atheistic Stalinism/communism is a relatively new phenomenon—about a century old—and, over the years, its rule (if not variants of its ideology) has greatly waned, so that only a handful of nations today are communist.
On the other hand, “roving extremist groups” (also known in other contexts and countries as “Islamists,” “terrorists,” “mujahidin,” “mobs,” “radicals,” “people-with-grievances,” etc.) attacking and killing “infidel” Christians have been around since the dawn of Islam. It is a well-documented, even if suppressed, history….
Muslim persecution of Christians exists in 41 nations today as part of a continuum that started nearly 14 centuries ago. As I document in Crucified Again: Exposing Islam’s New War on Christians, the very same patterns of Christian persecution prevalent throughout the Muslim world today are often identical to those from centuries past. The facts speak for themselves.

They sure do. At the very least, we need to pray for the persecuted church. And dispelling the myths about “peaceful” Islam is another helpful way to proceed here.