Like father like son it seems – sadly. Ron Paul was never a favourite of mine, for all sorts of reasons. And it seems his son Rand Paul may be almost as loopy as his father. He seems to have also picked up his dad’s unhelpful neo-isolationism, in which it seems they prefer that the US just pretend the rest of the world does not exist, and just keep to itself – as if that’s gonna work. 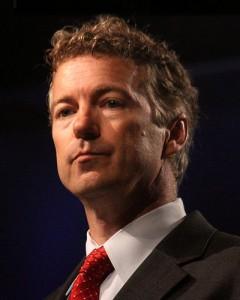 Of course they are gung-ho libertarians, which is why they keep coming up with rather num num ideas. I have spoken about libertarians in general and Ron Paul in particular elsewhere – see here for example: billmuehlenberg.com/2011/12/27/conservatism-libertarianism-and-christianity/

So what is Rand Paul up to now? Well, it seems some of his earlier comments have come out more openly of late, and they are causing – rightly so – a bit of concern among conservatives. Here is how Time magazine covers the story:

Kentucky Republican Sen. Rand Paul condemned during a little-noticed interview what he described as his party’s eagerness to engage in international conflict, arguing that Jesus Christ “wasn’t really involved in the wars of his days.”
“Part of Republicans’ problems and, frankly, to tell you the truth, some in the evangelical Christian movement I think have appeared too eager for war,” Paul, a likely 2016 presidential candidate, told the Christian Broadcasting Network. “I think you need to remember that [Jesus] was the ‘Prince of Peace.’”
The April 2013 interview was getting renewed attention Friday after it was highlighted by the website Mother Jones. Paul’s more non-interventionist foreign policy has made him an enemy of Republican foreign policy hawks but a favorite of libertarians. David Limbaugh, the brother of conservative talk-radio host Rush Limbaugh, was among the conservative commentators who expressed dismay at the remarks Friday. “I pray there’s some explanation,” he wrote on Twitter.

Yes I hope there is too. And here I only have what Time is offering us. But if it is even remotely accurate, then this is yet another indication of why both Christians and conservatives should be rather worried about Rand Paul. So let me assess his remarks.

As to his non-involvement in wars, of course Jesus wasn’t. Duh. Neither was he involved in running for office, being a Senator, making political speeches, or seeking to be POTUS. Of course Jesus did not have any binding political, military or social ties – he couldn’t. He was on an altogether different calling and mission.

He came to die for the sins of the world. His was not to be a political career or an involvement in the military; his focus was on one thing only – the cross. And that is in good measure why so many of the Jews of his day missed him. They were expecting a military king who would rid them of Roman oppression and make them once again great, as they were under David and Solomon.

So when Jesus came as a humble servant, not as a military conqueror, they rejected him outright. Jesus had a very good reason to stay clear of political and military entanglements. But to say that because Jesus was not involved in any of these things means that we should not be either today is just stupid in the extreme.

If Paul really believes this foolishness, then he should step down as Senator immediately. After all, Jesus Christ “wasn’t really involved in the politics of his days.” And his bumper sticker cliché about Jesus being the ‘Prince of Peace’ is equally unhelpful in this context.

Of course he was the Prince of Peace. But what does that have to do with geopolitics and international affairs? Christianity is not a pacifist religion. And Jesus was certainly no pacifist. Just check out what he did in the temple, after deliberately forming a weapon – a whip – to deal with his opponents.

And flipping over tables is not exactly the stuff of pacifism. And Paul should simply read the book of Revelation if he is so clueless here. Here we find Jesus as a military conqueror, kicking the butt of his opponents big time. With blood drenched robes he rides on a military steed, exercising the just judgment of God.

Moreover, for those ready to here raise the old canard that Jesus and the early Christians were all pacifists, see here: billmuehlenberg.com/2007/03/23/were-the-early-christians-pacifists/

Now, have there been some Republicans a bit too eager for war? Undoubtedly. But are there some politicians too hung up on isolationism, military non-involvement, and geopolitical naivety? Yep, there sure are, and the Pauls seem to be two primary examples of this.

Sorry, but in the very volatile and dangerous world that we find ourselves living in, give me a Ronald Reagan or a Margaret Thatcher any day of the week.