Boy, it seems that if you simply sneeze you will miss another batch of worrying sharia stories. I simply cannot keep up with all the cases of stealth jihad and creeping sharia all over the world. If I had a paid team of a half dozen researchers and writers I just might be able to keep my head above water here. 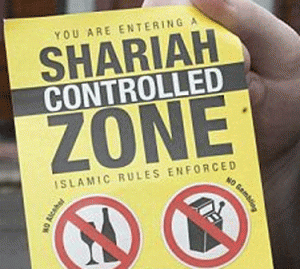 But with so much going on in this area, all I can do is skim the surface and basically offer headlines. There is far too much going on here, so let me just very briefly mention another seven worrying cases which have all occurred in the past few days. I begin here in Australia, then work my way overseas.

The first episode has to do with big time dhimmitude at supermarket chain Woolworths. They are plugging Ramadan as if it were just another happy-go-lucky religious festival, on a par with Christmas or Easter. Here is one news item on this:

Woolworths is wishing some customers a “Happy Ramadan” — but not everybody is celebrating. The supermarket giant has Ramadan promotions in 239 stores in areas with big Muslim populations. At Sunshine’s Marketplace Woolworths, posters and a display of nuts and dried fruit greet customers.
The month-long Islamic religious festival involves fasting in daylight hours. But some customers have complained the promotion is offensive and un-Australian. On the supermarket’s Facebook page, one person accused the chain of “pandering to a minority”. Another said: “I find this kind of advertising OFFENSIVE, as an Australian & as a female!!!”.

Of course these guys may simply look at this as another cold business decision, and an attempt to make more money. But it is also another good way to allow creeping sharia in our country. And for those not aware of the problems of halal foods, please see here: billmuehlenberg.com/2010/07/15/concerns-about-halal-foods/

My second story comes from Perth, with yet another hothead extremist allowed to do his thing freely:

A radical Perth preacher has praised militants responsible for beheadings and mass killings in Iraq and labelled Christians and Jews filthy rapists. In a series of online postings and videos Junaid Thorne, 24, has called on Muslims to defend their religion.
Junaid, who spent much of his youth in Saudi Arabia, sits in front of the black flag of al-Qaida breakaway group ISIS and calls on young Australian Muslims to reject their moderate leaders. ISIS, also known as ISIL, has been responsible for the murders of unarmed Shi’ite Muslims and has posted grisly pictures of executions online in a bid to attract radicals from around the world.

Example three offers an incredible juxtaposition to story two. While radicals are allowed to call for jihad and bloodshed, if someone dares to simply state the truth about the prophet, he is instantly sacked:

Broadcaster Michael Smith has been dumped from a guest slot on radio station 2GB after he referred to the prophet Muhammad as a paedophile. Smith had been booked to present Chris Smith’s afternoon program for three weeks starting Monday. However, he has revealed on his website that 2GB’s program director, David Kidd, phoned him on Friday evening and allegedly said: ‘‘We won’t be needing you, you can’t call a Deity a paedophile.’’
Mr Kidd declined to comment when approached by Fairfax Media on Saturday. Smith’s controversial outburst came during an on-air exchange with Ben Fordham on Thursday. ‘‘The prophet Muhammad was a paedophile, a pederast, a sexual offender, a man who promoted the idea that it was OK to marry a six-year-old and consummate the marriage when the little girl was nine. And that’s written into their books, it’s part of the philosophy … the Koran. It’s factually correct,’’ he said.
Smith remarked that he was legally permitted to make the comments having previously been cleared by an Australian Communications and Media Authority investigation, following an almost identical rant when he was the 2UE afternoon host in 2011.

So, speak the truth about Islam and you will be punished. Preach hate and jihad, and you get a free run. Um, why do I think that Islam and sharia have already won in Australia? Things are little better in the UK, where my next three stories come from:

A Muslim who stabbed a pregnant Romanian prostitute to death after warning her not to work near a mosque was jailed for at least 29 years today. Farooq Shah, 21, plunged a knife into Mariana Popa’s chest while riding his bicycle along a stretch of road notorious for sex workers.
Miss Popa, 24, had been in Britain for just three weeks and was trying to earn the money to support her family when she was stabbed in Ilford, Essex. She staggered into Chicken & Pizza 4U in Ilford Lane and collapsed in a pool of blood as her killer rode away on his bike. The mother-of-one was six weeks pregnant with her second child when she bled to death.

And people wonder why so many of us object to mosques being set up all over the West. Here is story five, and it too is a real shocker:

A Christian health worker has begun a legal challenge after being disciplined by the NHS for praying with a Muslim colleague. Victoria Wasteney, a senior occupational therapist in one of the country’s most racially diverse areas, was also accused of bullying the colleague after giving her a book about a Muslim woman who converts to Christianity. In addition, senior managers told Miss Wasteney that it was inappropriate to invite the woman to a community sports day organised by her church. The complaints led to Miss Wasteney being suspended on full pay for nine months.

Yep, dare to actually pray for a Muslim and you can get dumped for your evil behaviour. My sixth story is just as insane:

A headteacher has defended her decision to ban books which contained stories about pigs from some classes in case it offended Muslims. The literature has been removed from classes for under-sevens at Park Road Junior Infant and Nursery School in Batley, West Yorkshire. Headteacher Barbara Harris said the books remained in the school library for children to read.
Sixty per cent of the pupils are of Pakistani or Indian origin and 99% of these are Muslims. Mrs Harris said in a statement released today: “Recently the headteacher has been aware of an occasion where young Muslim children in a class were read stories about pigs. This could have caused offence to religious sensitivities.”

Hey, my sensitivities are offended big time by dhimmi dupes like this. My last story is also a mind-bender:

As Ramadan season nears, U.S. soldiers are worried that they won’t be able to adequately defend their posts. Muslims fast during Ramadan from dawn until dusk and expect anyone in their presence, regardless of their own religion, to do the same. Those who are spotted eating or drinking during the holy season can be put to death. But in the hot Middle Eastern summer, many U.S. servicemen are worried they won’t be able to carry out their duties without at least drinking water throughout the day.

OK then, seven stories in less than seven days. And this is just the tip of the iceberg. Islam is on a roll, while the West sleeps through its own enslavement. Geert Wilders was right to say that Islam is the Communism of our time. And Lenin was quite right to speak of “useful idiots” in the West who are doing the enemy’s work for them.