With Islam steadily making major inroads all over the West, and with so many Muslims refusing to blend in with the Western host cultures, remaining instead in their own cultural ghettos, the issue of the burqa (the full body covering for Muslim women) keeps arising.

Is it a simple cultural matter which should be of no concern to Westerners? Or is there something problematic about it, on a number of levels? Some Western nations do think it is problematic, so much so that some have banned it, such as France and Belgium, and some towns and cities in Italy and Spain have also done so. Other places are also considering this. 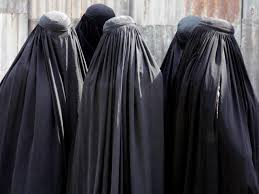 Of course Muslims are furious at this, as are various other groups, whether duped dhimmis or certain civil libertarian groups. The French burqa ban was recently assessed in a European court and found to be valid. As one news report states:

Judges at the European Court of Human Rights (ECHR) have upheld France’s burqa ban, accepting Paris’s argument that it encouraged citizens to “live together”. The law, introduced in 2010, makes it illegal for anyone to cover their face in a public place. While it also covers balaclavas and hoods, the ban has been criticised as targeting Muslim women. The case was brought by an unnamed 24-year-old French citizen of Pakistani origin, who wears both the burqa, covering her entire head and body, and the niqab, leaving only her eyes uncovered.
She was represented by solicitors from Birmingham in the UK, who claimed the outlawing of the full-face veil was contrary to six articles of the European convention. They argued it was “inhumane and degrading, against the right of respect for family and private life, freedom of thought, conscience and religion, freedom of speech and discriminatory”.
The French government asked the court to throw out the case, claiming that the law was not aimed at the burqa or veil but any covering of the face in a public place, and also applied to hoods and helmets when not worn on a motor vehicle. The court heard that out of an estimated five million Muslims living in France – the exact figure is unknown as it is illegal to gather data by religion or ethnic group – only about 1,900 women were estimated to be affected by the ban, according to 2009 research.

The argument for social unity and cohesion – within limits of course – is perfectly valid. No nation can last long with various groups allowed to live in isolation from the rest of the country. Accepting the host nation’s core values, beliefs and principles is essential for national unity, and those groups who refuse to even make an effort to fit in are a real worry indeed.

Indeed, we know that all over the West there is a huge problem with creeping sharia and a two-tiered legal system. Islamic family law, dietary laws, financial laws, and so on are allowed to be set up, resulting in more social disintegration.

And then there is the question of how just demeaning and depersonalising things like the burqa are to women. But lest I be accused of being sexist here, let me just offer the thoughts of two Western women about all this. One English commentator, Allison Pearson, said that “Banning the burka is not racist – it’s a kindness”. She said this after the ECHR decision:

France had submitted that the face “played a significant role in social interaction” and that individuals might not wish to see, in places open to all, practices or attitudes which could fundamentally call into question the possibility of an open, interpersonal relationship that formed “an indispensable element of community life”. In other words, many of us are offended and perturbed by the sight of a woman wandering around in a bin bag, condemned to be cut off from normal human interaction in a modern democracy.

She replies to those who claimed this was a racist decision:

As for an increase in racism, that is being fuelled by a failure to integrate and, ironically, an implacable hostility to liberal attitudes. The French and Belgian bans on the burka are the opposite of racism: they insist that all citizens are treated the same and have an equal chance of belonging. The burka is a cause of racism, not a symptom. So, following the ringing clarity on this fractious issue from the ECHR, is there now a chance that Britain will also ban the burka?
I’d like to think so. Still, you can bet our pusillanimous politicians will mutter that it is not for the state to interfere in what people choose to wear, even though girls in schools suspected of fostering Islamic fundamentalism seem to have little choice in their clothing, or in much else. They are treated by a patriarchal culture as if they were being raised in rural Pakistan and a liberal British establishment wrings its hands and conspires in their oppression. One day, the burkas, like a flock of crows, will come home to roost. Ban it. Now.

And an older article first penned when the French were looking at this issue by a non-conservative, non-religious woman is also worth quoting from. Back in 2010 Virginia Haussegger declared that “The burqa is a war on women”. She wrote:

It would seem there are some things in Australia we are not allowed to discuss. A ban on the burqa is clearly one of them. But the time has come to get over our fears and cultural fragilities – and grow up. The call to ban the burqa is receiving serious consideration in European parliaments. And it should here, too.

Unfortunately for Muslim women, the burqa is not just a garment. It has become a weapon in a war of ideology: a war in which women are the battleground and their rights and freedoms are at stake. Here’s the problem. Those who are critical of calls to ban the burqa perceive it to be an attack on personal freedoms. They view the burqa as an individual choice – which is arguable – and a religious requirement, which it is not. They look straight past the woman hidden from public view under heavy cloth, and instead applaud our multicultural tolerance. This is a mistake. The burqa has nothing to do with ethnic diversity and everything to do with a war against women. Those who wear it, and those who insist it be worn, subscribe to an ideology in which women are inferior sexual temptresses, whose female form is a problem and must be covered. This is based on the contradictory proposition that men are both superior and yet unable to control their sexual urges if they see women in their natural human state. If this wasn’t deadly serious, it would be funny.
Award-winning Muslim journalist Mona Eltahawy says she is appalled to hear Europeans defend the burqa and niqab. “A bizarre political correctness has tied the tongues of those who would normally rally to defend women’s rights,” she says. Yet, to argue directly with Islamic fundamentalists about gender equality is fruitless. According to Eltahawy, “the ideology that promotes the niqab and burqa does not believe in the concept of women’s rights to begin with”.
Let’s be clear. This is not about the hijab – or headscarf. Like any hat or cap, the hijab is a matter of individual right. Whether worn for reasons of devotion, modesty, conformity or fashion, it is personal and the state has no business banning it. The burqa is an entirely different issue. The burqa and the niqab shroud the full body, covering every part of a woman except her feet. The niqab includes a slit for the eyes, whereas the burqa has mesh netting.

A democracy must always balance the rights of the majority with those of the minority. Generally speaking, individuals should be able to dress as they please, within reason. But societies have every right to expect that those coming from foreign lands offer a degree of agreement with its core beliefs and values, including the full political and social equality of women.