The World Conference on Families regional conference went ahead – only just. The hate brigade did everything they could to shut it down – all in the name of tolerance and acceptance of course. Four venues were dumped, and it was finally held in a church. The main organiser, Babette Francis of Endeavour Forum, deserves all our thanks for so heroically hanging in there.

The conference was a great time of sharing about the importance of marriage and family, and the protection of the unborn. For highlighting these tremendous goods, the radicals were out, full of demonic rage. It was all very telling. What you passionately hate tells us a lot about a person. To hate so strongly the pro-life and pro-family message indicates some real deep-rooted problems.

But the conference went ahead anyway. Nearly 400 people packed into the venue to celebrate life, family and marriage. Outside were 50 screaming banshees, doing all they could to prevent people from entering. Fortunately there was an equal number of police on hand who did a terrific job, along with security guards, and even the riot squad on standby. 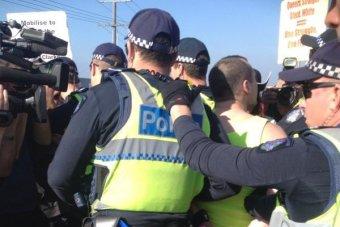 I was jostled, pushed and screamed at as I was trying to enter, carrying a box of books. It was only because of the police that I managed to make my way through the gauntlet of hate and bigotry. Not all were so lucky. At least one elderly man was shoved to the ground and kicked by the “tolerance” brigade.

When I was later interviewed by a Guardian newspaper journalist, she kept asking me how homosexual marriage will personally impact me. I told her I was just manhandled and abused by a group of thugs! She asked again, how am I personally affected by this. I said, again, being roughed up by the gaystapo and their supporters did indeed personally affect me. She still asked me again. Duh.

Indeed, if you read or hear mainstream media reports about this, I can tell you right now that 90 per cent of what they present is false. I already read/saw some news reports, and it is as if these “journalists” were at another conference. The outright lies being told by the MSM are absolutely incredible.

For example, when abortion/breast cancer expert Dr. Angela Lanfranchi presented carefully detailed and documented medical research, the TV crews filmed her intro, but as soon as she started discussing science and statistics, they packed up and left. Later they claimed she only presented studies done on rats. What disgusting liars these guys are.

While the police and security did a superlative job, one person pretending to be a delegate did get in. Early on she jumped on the stage and started screaming like a maniac. As she was led away by security, she let out an ear-crunching extended howl that sounded like something a trapped animal might make. This demonic squeal was shocking to hear. The hatred of these folks amazed everyone present.

Despite being a successful conference, there are two main losers here. One, obviously, is freedom of speech, democracy, rule of law, and so on. The very basis of a free society was horrifically attacked by these thugs and hatemongers. Democracy has been stabbed in the back, and we are well on the way to losing it all.

The other big loser is the raft of those jumping ship at the last minute. All four Liberal party politicians who had committed to speak at this event pulled out. Sadly the fascists have won, and these folks have handed them a great victory by refusing to stand when standing was vitally needed.

What is the point of having such politicians when the times you need them the most, they cut and run? I find this so very disturbing. Why does Matthew 10:32-33 keep coming to mind here? “Whoever acknowledges me before others, I will also acknowledge before my Father in heaven. But whoever disowns me before others, I will disown before my Father in heaven.”

Sure, defending marriage, family and the sanctity of human life is not identical to defending Jesus Christ, but they are certainly very closely tied together. These are clearly gospel issues, and all Christian politicians should be prepared to fully stand for them even as the heat gets high.

In times of extreme crisis, conflict and war, two things will always be revealed: those who are real heroes who have the strength of their convictions, and those who are not. When the hearts of many fail in difficult times, the true heroes always come to the fore.

The words of Martin Luther King, Jr. also come to mind here: “In the end, we will remember not the words of our enemies, but the silence of our friends”. And as A. W. Tozer said, “The true follower of Christ will not ask, ‘If I embrace this truth, what will it cost me?’ Rather he will say, ‘This is truth. God help me to walk in it, let come what may!'”

Some have said it was a difficult decision about attending. Respectfully I don’t see it as being difficult at all. When the stakes are this high and the battle is this fierce, we either stand and fight for what we believe in, or we duck for cover and let the other side win. And that only further emboldens them to do even more direct action against us in the future. We are thus helping them in their agenda as they seek to silence us and destroy us.

With so many capitulating to the thugs, these radicals will simply be further empowered to attack more groups, meetings and organisations. And since their real hatred is the Christian church, you can expect to see this come under increasing attack in the days ahead. When evil wins and righteousness cowers, then we simply get more evil and less righteousness.

While every Liberal speaker broke their commitment, and some religious leaders also cut and run, last minute replacement speakers who had courage and conviction stepped in to fill their places. Thus Dr David van Gend and Rev Dr Mark Durie delivered excellent talks.

Once again, Babette Francis and her team deserve the highest possible praise. They had to deal with five venues in almost as many days, and still present a successful family conference. She is a champion among women, and has far more courage than most men – including our “Christian” politicians and church leaders.

And well done also to Danny Nalliah and Rise Up Australia for letting their church be available at the last minute. He too is another champion. I am not aware of any other large church in all of Melbourne which would have opened its doors to this event: they would think it too controversial, and they would be too afraid of rocking the boat.

Fred Nile also deserves praise as the only politician willing to present truth and reject the hate of the protestors. The screaming protestors were there for around seven hours, shouting obscenities, stripping off and doing topless demos, and pounding manically on drums like some primitive jungle tribe.

The contrast between the civilised, polite, loving and respectful people inside, and the hate-filled savages who tried to deprive them of their rights to freedom of assembly, freedom of speech, and freedom of conscience was startling. If there was ever a perfect picture of the war we are in, the two contrasting sides showed this quite clearly.

So we had 400 true heroes on display today, in marked contrast to both the feral activists, and those who decided to run for cover instead of stand up for what is right. Well done you 400 – you are true champions, and your reward will be great in heaven.

41 Replies to “WCF, Freedom and Democracy Versus the Fascists”