It is hardly surprising that the secular culture is constantly working against the Christian faith, seeking inroads into the churches, and working to bring wholesale compromise and carnality. This happens all the time, and is to be expected. Jesus and the apostles warned about this frequently.

What is more surprising however is when people and organisations and churches claiming to be Christian do the same thing. Of course this too was warned about in Scripture. But it is still a shocker to see it actually occurring with such boldness and reckless abandon, and with such contempt for biblical truth.

If I were Satan seeking to destroy the church from within, I would especially target its young people, and get them to doubt their own Bibles and their own core teachings. Using popular Christian singers and concerts would be a great way to do this. I have written before about this very thing: billmuehlenberg.com/2014/08/17/a-great-way-to-destroy-the-faith-of-millions/

There are sadly too many examples of this all around us. A recent one involves some Christian music festival held in NSW called Black Stump. It has been going for around two decades now, and bills itself as “a Christian Music, Arts and Teaching festival held annually”. 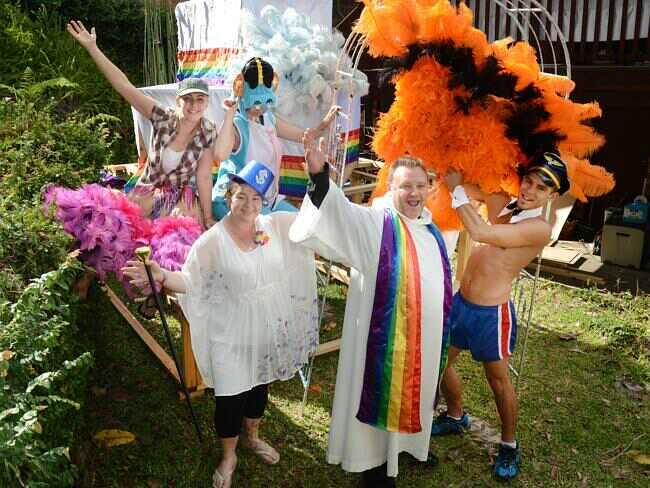 Sadly however, next month’s festival is proudly featuring as a major speaker someone who happens to be a well-known apostate when it comes to the clear teachings of Scripture on the issue of human sexuality. He is in fact quite proud to tell us that God is wrong about homosexuality, and that he knows better. The festival site offers this blurb about him:

Fr Rod Bower is an Anglican priest and Rector of Gosford where he has served for 16 years. Fr Rod is a passionate advocate for a number of social justice and human rights issues. He believes that our treatment of Asylum Seekers, denial of marriage to gay and lesbian people, the lack of action on climate change and the lack of recognition of First Nations people damages our corporate soul. Fr Rod is married to Kerry, also a passionate advocate for Asylum Seekers, they have two married children and two grandchildren.

He proudly calls himself “progressive”. This is not just a generic term, but actually has a quite specific meaning. There are various “progressive Christian” organisations around and they clearly tell us where they stand on things. It is obvious from their own words that these progressives are fully apostate. See here for more detail on this: billmuehlenberg.com/…/23/progressive-christianity/

One person already complained to the festival organisers about having this false teacher being billed as one of their main attractions, and quickly received this reply:

Thanks for your email.
It’s a shame you are going to boycott our event due to one member of our line up.
We hope you have a good October long weekend regardless.
Cheers,
Black Stump Admin

Um, what? If these conference organisers actually believe that a little false teaching and a little apostasy is perfectly acceptable, then they know nothing about biblical Christianity, and seem instead to be simply pushing trendy leftist agendas and just interested in making money.

How in the world can they even think like this? “He is just one speaker”. So what? Just one bit of leaven can spoil the whole affair. The Scriptures in fact make this perfectly clear. And if they are happy to promote this apostate and his appallingly unbiblical views to these young people, then who and what else will they be dishing up here?

Consider just a few biblical passages on leaven. Generally in Scripture leaven is used as a metaphor for a harmful and negative influence which must always be shunned and rejected, not winked at or put up with. Here are just a few texts on this:

Galatians 5:7-9 You were running a good race. Who cut in on you to keep you from obeying the truth? That kind of persuasion does not come from the one who calls you. “A little yeast works through the whole batch of dough.”

1 Corinthians 5:5-7 I have decided to deliver such a one to Satan for the destruction of his flesh, so that his spirit may be saved in the day of the Lord Jesus. Your boasting is not good Do you not know that a little leaven leavens the whole lump of dough? Clean out the old leaven so that you may be a new lump, just as you are in fact unleavened.

Sure, on rare occasions leaven can be used in a positive sense, as in Matthew 13:33: “He spoke another parable to them, ‘The kingdom of heaven is like leaven, which a woman took and hid in three pecks of flour until it was all leavened’.”

But generally it is used in a very negative fashion – the idea being that a little sin can seriously impact the whole lot. Yet these conference promoters think it is no big deal at all, and don’t seem to give a rip about it. If that is how they think about the Christian faith then it sounds like we should avoid this festival like the plague.

Indeed, everyone should contact Black Stump and let them know about your grave concerns here. They can be contacted through this link: blackstump.org.au/?page_id=23

Such cavalier and blasé replies to something as serious as this is very telling indeed. As I said earlier, if I were the devil, seeking to nullify the faith and get young Christians off the rails, something like this would be an ideal strategy: hold a “Christian” music festival with a mishmash of teaching, some good and some bad, and then sit back and enjoy the results.

No wonder so many churches and organisations are becoming ineffective for Christ and the Kingdom. No wonder so many young people are abandoning the faith, or living completely compromised and carnal lives. With Christian friends like this, who needs enemies?

Fifteen years ago ex-homosexual Joe Dallas warned about how the churches would crumble over the issue of homosexuality. He said this: “The debate over homosexuality and the Bible – specifically, whether or not the Bible condemns homosexual acts in all cases – will do no less than rip the body of Christ apart within the next decade. It will force believers to declare, in black and white terms, where they stand on issues of sexuality and biblical interpretation.”

He was 100 per cent correct, and what we see at this festival is just another example of this. As I said, please contact them and share your concerns. And also please pray for them that they have a change of heart and mind, and realise that the Word of God must always trump trendy lefty social issues and anti-biblical agendas.