Since they seem to be all the rage at the moment, it is fitting that we know a little bit about zombies. Evidently they are known primarily as animated corpses, carrying on in mindless capacity. The stuff of folklore and Hollywood films and TV shows of late, this description seems rather apt for many folks walking amongst us today.

There are plenty of the living dead in our midst, who may move and walk, but seem otherwise to be dead – at least in the head. They simply go with the times and parrot whatever they are told to say. They lack the capacity to critically reflect, assess and think on their own.

They do as they are told and are quite happy that way. Indeed, the masses tend to just accept things as they are without asking hard questions or looking beyond the surface. So lulled are they into a comatose state by bread and circuses that they are no problem for any potential despot who might come along and manipulate them at will. Indeed, America under Obama seems to be a perfect illustration of this. 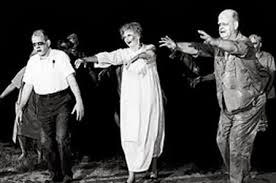 And the really worrying thing is this does not just describe so very many non-believers. Sadly, there are way too many Christians who seem to fit this description as well. There are all sorts of Christians who seem to have given up on thinking, on discerning, on testing all things, on holding up everything to the light of Scripture.

Recall how the Bereans were praised for doing this very thing: “Now the Berean Jews were of more noble character than those in Thessalonica, for they received the message with great eagerness and examined the Scriptures every day to see if what Paul said was true” (Acts 17:11).

Not long ago most Christians carried a Bible to church with them as they heard sermons heavily comprised of Scripture. Today few believers bring a Bible to church, and few churches actually teach from the Bible. Instead we get an endless supply of feel-good pep talks, topical sermons about how we can be successful in life, and plenty of entertainment and razzamatazz.

Why bring a Bible when it features so sparsely in so many of our church services today? And Bible reading at home seems to be on the wane as well throughout much of Western Christendom. As a result we have the most biblically illiterate and theologically obtuse generation of Christians ever.

The examples of this are legion, and I encounter them every day, sadly. As but one example, I recently posted something on the New Age heresy which is being promoted by the Osteens. A Christian asked me in response, ‘Is it your ministry to find fault with other Christians?’

My reply went along these lines: ‘My ministry is to faithfully and fearlessly uphold and proclaim the gospel of the Lord Jesus Christ. I would have thought that this should be the ministry of every single Christian on the planet. And of course to stand up for truth always means to refute error, and to point out – when and where necessary – the gospel is under attack. Paul did that regularly as part of his ministry, and so should every single one of us.’

This person came back and said he thought 1 Corinthians 6:1 meant we should not do this. I responded that this passage has absolutely nothing to do with telling believers not to critique and judge others – the complete opposite in fact.

As the context makes clear (1 Cor. 5-6), Paul of course was talking about how they should not be going to secular law courts to deal with the believer caught up in incest; instead the Christians should be judging this brother for his sin. They have a God-given responsibility to rebuke this brother and seek his restoration.

Paul said time and time again that Christians must adhere to sound doctrine and careful biblical teaching. Jesus, Paul and others warned on numerous occasions about not being led astray, and not allowing false teachers to come in and destroy the flock. Yet way too many Christians today don’t even care about this. They are running on feelings instead.

We have entire churches full of people today who do not discern, do not think, and do not biblically evaluate. They merely emote and mindlessly accept whatever is thrown at them from the pulpit – and from the surrounding secular culture.

But why are so many Christians shocked to hear all this? This is not some novel, alien idea. It is at the very heart of the Christian faith. Do these Christians not even read the gospels? Do they not recall that Jesus was asked what the most important commandment of all was?

And what was his reply? ‘Love God with all your heart, soul, mind and strength.’ This is found in all three synoptic gospels. Look it up for yourself. This is hugely important, Jesus said. So why is it not important for most Christians today?

If what C. S. Lewis wrote in Mere Christianity 70 years ago was true back then, how much more so is it desperately true and necessary today:

God is no fonder of intellectual slackers than of any other slackers. If you are thinking of being a Christian, I warn you: you are embarking on something that is going to take the whole of you, brains and all. But fortunately, it works the other way round. Anyone who is honestly trying to be a Christian will soon find his intelligence being sharpened: one of the reasons why it needs no special education to be a Christian is that Christianity is an education itself. That is why an uneducated believer like Bunyan was able to write a book [The Pilgrim’s Progress] that has astonished the whole world.

Bunyan was no zombie. Lewis was no Zombie. Paul was no zombie. So why do we have so many brainless and clueless zombies in our churches today? When Hollywood keeps speaking about the zombie apocalypse, is it possible they just might have the Christian churches in mind?

10 Replies to “There Are Zombies Amongst Us”