It is amazing just how many Christians have an absolutely pathetic and unbiblical view of who Jesus is. Far too many believers still think of him as a tree-hugging greenie, a peace sign-flashing hippy, or a door-to-door salesman offering personal happiness and riches.

He was of course none of these. He was and is the Son of God who is holy, just and majestic. Even just reading the gospel accounts will show us not a weak and anaemic Jesus, but a strong, forceful and confrontational Jesus, willing to bring division, willing to rebuke others, and willing to even throw tables around when necessary. 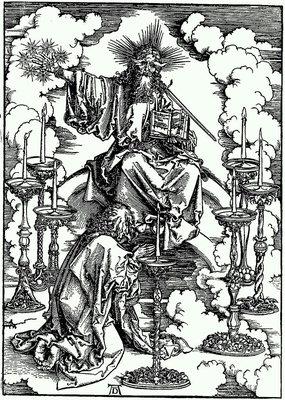 And if we could ever get these biblically illiterate and theologically stunted Christians to read the book of Revelation, they just might get the surprise of their lives. You see, this book is all about Jesus, and it sure isn’t a woosie, weenie Jesus we find there.

That this book is all about Jesus is clear from the outset, as the opening eight verses of the book make clear:

The revelation from Jesus Christ, which God gave him to show his servants what must soon take place. He made it known by sending his angel to his servant John, who testifies to everything he saw – that is, the word of God and the testimony of Jesus Christ. Blessed is the one who reads aloud the words of this prophecy, and blessed are those who hear it and take to heart what is written in it, because the time is near. John, To the seven churches in the province of Asia: Grace and peace to you from him who is, and who was, and who is to come, and from the seven spirits before his throne, and from Jesus Christ, who is the faithful witness, the firstborn from the dead, and the ruler of the kings of the earth. To him who loves us and has freed us from our sins by his blood, and has made us to be a kingdom and priests to serve his God and Father – to him be glory and power forever and ever! Amen. “Look, he is coming with the clouds,” and “every eye will see him, even those who pierced him”; and all peoples on earth “will mourn because of him.” So shall it be! Amen. “I am the Alpha and the Omega,” says the Lord God, “who is, and who was, and who is to come, the Almighty.”

And as you read the book, you see how the idea of God’s justice and judgment on his and his peoples’ enemies is a primary theme running throughout. Now I have written before about how Christians need not be ashamed of appealing to God for justice and vindication. See for example this recent post: billmuehlenberg.com/2014/09/03/on-having-enemies/

Well, the book of Revelation is filled to the gills with these themes. It is all about God giving payback, and vindicating his people, especially all those slain for their testimony. A new book and a chapter in it are well worth highlighting in this regard.

Heath Thomas, Jeremy Evans and Paul Copan have edited a great new volume entitled Holy War in the Bible (IVP, 2013). Chapter 6 by Alan Bandy is called “Vengeance, Wrath and Warfare as Images of Divine justice in John’s Apocalypse”. The chapter is well worth quoting from. He begins with these words:

John’s apocalypse is easily the most violent book of the New Testament. No other book in the New Testament is filled with imagery depicting scenes of carnage, destruction and death on an epic scale. What is more, it vividly attributes the most severe scenes of immolation to the vengeance of God displayed as an outpouring of divine warfare and wrath….
John is writing in response to the brutality and injustice of the Roman Empire as perceived by marginalized Christians who need assurance that God’s justice will ultimately prevail through retribution and recompense. As such, divine wrath and warfare is not arbitrary but central to the question of divine justice.

As he pointed out, the backdrop to this book is the horrific persecution and martyrdom so many believers were experiencing. Just as today’s believers being slaughtered especially by Muslim militants are asking about God’s justice, so too back then.

Says Bandy, “John’s vision, however, assuages these fears by depicting the eventual reversal of this miscarriage of justice. This concern for justice and vindication is voiced by the cry of the martyred souls under the altar (Rev 6:9-11; 16:7).”

When he opened the fifth seal, I saw under the altar the souls of those who had been slain because of the word of God and the testimony they had maintained. They called out in a loud voice, “How long, Sovereign Lord, holy and true, until you judge the inhabitants of the earth and avenge our blood?” Then each of them was given a white robe, and they were told to wait a little longer, until the full number of their fellow servants, their brothers and sisters, were killed just as they had been.

Bandy notes how these appeals for vindication and even retribution spring from Old Testament concepts of justice. Deuteronomy 32 is a clear example of this, especially verse 43:

Rejoice, you nations, with his people,
for he will avenge the blood of his servants;
he will take vengeance on his enemies
and make atonement for his land and people.

As Bandy says, “The language of vengeance in Deuteronomy 32:43 is the backbone of the imprecatory prayers.” I have written about these elsewhere: billmuehlenberg.com/2012/02/02/the-imprecatory-psalms-part-one/

In the light of so much fairy floss Christianity today, and calls for “your best life now,” Bandy speaks to how believers in John’s day were assured of certain victory. Rev. 12:11 offers three things:

They triumphed over him
by the blood of the Lamb
and by the word of their testimony;
they did not love their lives so much
as to shrink from death.

That bit about not living their lives jumped out at me as I read this portion of Bandy’s chapter. We have the exact opposite today in so much of our Western churches and preaching: it is all about loving ourselves, pandering to ourselves and serving ourselves.

That is not how any believer today will stand up under real persecution. Indeed, far too many believers will quickly abandon their faith when they discover that it is not about them, and that there might actually be a cost to following Jesus. Believers 2000 years ago did not follow such false gospels, but clung to the real deal. That gave them the ability to stand strong under heavy persecution and face death boldly.

Moreover, not only do we find God unashamedly wreaking vengeance on his enemies in the book of Revelation, but we find the saints rejoicing over this. Revelation 12:12a says this: “Therefore rejoice, you heavens and you who dwell in them!” Says Bandy,

The idea of saints rejoicing over the destruction of Babylon may seem a little mean-spirited or vindictive, but in reality it flows out of the concern for God’s justice by vindicating his righteous servants. The command to rejoice may echo Jeremiah 51:48, but it is rooted theologically in Deuteronomy 32:43 – the climax of the Song of Moses. … Both passages indicate that rejoicing is the proper response to the expressed retribution against the nations for the way they treated God’s people.

In contrast to the wimpy, saccharine-sweet, man-pleasing Jesus that so many believers today hold to, we find “one of the most graphic and violent images depicting Jesus as the divine warrior”. His robe is soaked in blood (Rev 19:13) as he treads the winepress of God’s wrath (Rev 19:15). Says Bandy,

The blood on Jesus’ robe is that of his victims, as confirmed by the allusion to Isaiah 63:2-6. In the Song of Moses (Deut 32:41-42). God promises to exact vengeance on behalf of his people with very violent and bloody language (cf. Is 42:13; Hab 3:11-14). Jesus, therefore, is the full revelation of the divine warrior from the Old Testament who executes judgment against all the enemies of God and his people.

In his conclusion he says this:

The images of vengeance, wrath and warfare in John’s Apocalypse are central to the purpose of the book as a means to encourage believers to remain faithful, patiently endure and trust in God’s justice…. Believers are not only braced for persecution, but they are encouraged to bring their case before the ultimate judge through prayers and petitions. Although believers may not find deliverance from execution, their pleas for justice will not go unanswered.

The contrast between those brave and fully-committed believers back then who faced persecution and death could not be greater with the spineless, self-centred and carnal lot we find today in most churches. No wonder the book of Revelation will hardly ever get a look in by most churches today, whether that of Osteen or others.

5 Replies to “Jesus, Justice and Vindication”