There has been yet another horrific beheading. But no, it was not another sad episode from Iraq, or other parts of the Middle East. It was from the comfortable suburbs of London. Yes, a woman was beheaded in her own garden by another knife-wielding Muslim.

And my biggest worry is this: while the beheading of an elderly woman may not rile too many feathers, more people may wake up to the barbarism of Islam by the fact that some cats were beheaded first before she was. Yes, that seems to be where our priorities lie nowadays. 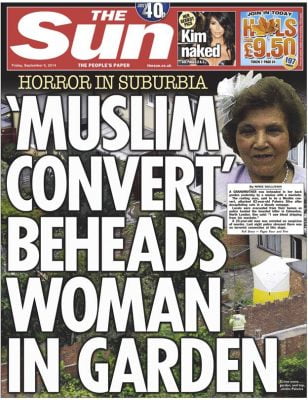 As the Sun opens its article: “A grandmother was beheaded in her back garden yesterday by a maniac with a machete. The ranting man, said to be a Muslim convert, attacked 82-year-old Palmira Silva after decapitating cats in a bloody rampage.”

Both things are evil of course. But why do I fear that the only thing to wake up sleeping Westerners is not the fact that she got beheaded, but that her cats were beheaded first? How have we come to the place where we can just sleep through pure evil, and cannot even wake up when it is happening on our very doorsteps?

I just wrote yesterday about the horrific case of child abuse in England committed by mostly Muslims. Some 1400 children were tortured and sexually abused, but it went on for year after year because the false gods of political correctness and multiculturalism said that we cannot use the M word.

England and much of the West seem more concerned about offending Muslims than they are about protecting children from rape and sexual assault. All because of this lousy commitment to multiculturalism – a failed god if ever there was one. As Mark Steyn says about this:

But back to our beheading story. It has only just recently occurred, and as usual, many media outlets are refusing to use the M word. They are playing it safe. But that only means we will get more of this happening in the future. Here is how the Daily Mail begins its coverage:

A woman who was found beheaded in a suburban back garden after a man ‘went berserk with a machete’ has been named by police as Palmira Silva, 82. The victim, who is believed to be of Italian descent and also known as Pamela, was found dead outside a house in Edmonton, north London.
Police say the killing is not currently being linked to terrorism and that specialist firearms officers were called to reports of a man wielding a knife and attacking animals just after 1pm. Witnesses say he had been ‘cutting the head off a cat’ as he walked along the road.
When officers arrived, they found the victim collapsed in a garden. She was pronounced dead at the scene. Police officers cornered the man to stop him attacking anyone else while they evacuated homes along Nightingale Road, Metropolitan Police Commander Simon Letchford said.
The 25-year-old man was arrested on suspicion of murder and is in custody. He is also receiving medical treatment after sustaining injuries in the arrest. Rickie Benson, a builder working up the road from the horror scene, said: ‘I heard there was a man walking up the road cutting the head off a cat as he made his way to the house.

In a war, we must identify the enemy. Refusal to do so means we are doomed to lose the war. If people are doing utterly diabolical things in the name of Islam, then we should name the culprit. Pretending Islam is a religion of peace, and treating it as a protected species, helps no one.

It simply makes matters worse. So whether it is the contemptible rape of young children or the beheading of grandmothers and cats, all this will simply continue and be compounded, if we refuse to call a spade a spade. The simple truth is, Islam is not a religion of peace.

It is a murderous political ideology and death cult. The sooner we stop lying to ourselves about this the better.

14 Replies to “Beheadings: What Will It Take To Wake Us Up?”