Political Correctness is dangerous. It is deadly. And I mean this in a very real sense. The horrific news coming out of Rotherham, UK about 1400 raped and sexually abused children over a 16-year period is in good measure directly due to the curse of political correctness and moronic multiculturalism.

Instead of protecting innocent children and teenagers, the PC zombies running the show decided that it was far preferable to just let it keep on going, rather than ruffle any PC feathers, and admit that they had a problem with Muslim paedophiles. 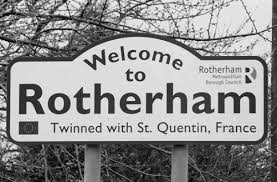 So bound are we by demonic political correctness and so enslaved are we to Islamophobia phobia that we would rather see children brutally raped and sexually assaulted than say that we might have a problem with a certain group of people.

Perfect storms don’t come much more perfect than the Rotherham child-abuse revelations currently rocking the U.K. Everything modern that Britain is famous for fretting over—from class to race, pedophiles to official incompetence—is implicated in this sordid story of abuse in and around a northern English town once known for producing steel.
All eyes have been on Rotherham since a report into child sexual abuse there was published on Tuesday last week. Commissioned by Rotherham Borough Council, the report makes grim reading. It says that from 1997 to 2013, 1,400 children and teenagers were subjected to “appalling abuse” by gangs of older men. Some of the victims, almost all of them girls, were trafficked around Britain to be sexually abused. They were often threatened with violence against their families to stop them from seeking help.
The report, by public-policy professor and former social worker Alexis Jay, says a key reason the abuse went on for so long was because of the “collective failures” of the local authorities, including police. Despite being presented with what Ms. Jay calls stark evidence that abuse was taking place, the Rotherham authorities underplayed the problem. The institutions charged by modern society with protecting the vulnerable from the malevolent through their inaction allowed the abuse to continue.
It took the press, one of the most maligned institutions in Britain, to do what reporters are so often criticized for doing—digging dirt—for the Rotherham abuse to become a national story. Dogged reporters at the Times of London, owned by the same company as this newspaper, played a central role in exposing child abuse in towns like Rotherham and forcing an investigation.
Why were officials so unwilling to poke their noses where they most certainly did belong? Because of the race and class of the perpetrators and victims, according to the Jay report. The vast majority of the abusers were of Pakistani and Muslim origin; the vast majority of their victims were white and working class.

So this is more than a story of opportunistic men taking advantage of vulnerable girls from a poor, postindustrial town. It speaks to the elevation of offense-avoidance above everything else, even the basic civilized requirement to protect the vulnerable. This is why the Rotherham story has rattled so many. They feel that the abuse is partly a consequence of the moral cowardice of modern-day politicos more concerned with appearing right-on than doing what is right.
Rotherham exposes the danger of politically correct underreaction to reports of serious crimes. Yet there is a risk that the story will spark a serious overreaction in another regard. The story plays into a rather unhealthy obsession of modern Britain: pedophiles.

Nicolai Sennels says this scandal, where:

authorities ignored the fact that packs of Pakistanis were abducting, raping, and torturing children by the hundreds, forcing them to abort their unborn babies and threatening to kill them in the most horrific ways if they told about the abuse, is far from unique. The phenomenon of “Asian” gangs — which actually are Muslim gangs — seducing children and youngsters with gifts, drugs and promises of love, or simply using sheer violence, to get their sexual and paedophilic lusts satisfied, is haunting many British and European cities.

So why is this happening. Several reasons are offered:

The first is Islam. It is a fact that its founder and prime role model liked to rape small children. Mohammed, the prime example for Muslims, married Aisha when she was six and had intercourse with her when she was nine. Besides, according to the Quran (4:24), Muslims are allowed to have sex with females slaves — which is exactly what their young victims are. Uncovered women are in many Muslim cultures seen as a kind of prostitute, and if a man is aroused by such a female, then — partly due to the corrupted logic of responsibility within Muslim psychology — the female is blamed for being raped (and will therefore often face execution).

Another reason, as other reports detail, is the ugly stranglehold of political correctness in which those who actually sought to raise the alarm were punished for doing so:

Colin Hart, director of The Christian Institute in New Castle, says social workers warned authorities that something was wrong. “But they continually ignored the concerns that were raised,” says Hart, “and in one case a social worker was disciplined for raising concerns.” The Associated Press and BBC have reported the perpetrators were Pakistani, and political correctness trumped law enforcement action.

Another article details this appalling situation:

A researcher who raised the alarm over the sexual abuse of teenage English girls in Rotherham by Pakistani/Muslim gangs more than a decade ago was sent on a ‘ethnicity and diversity course’ by child protection bosses who refused to act on her evidence. The researcher, who was seconded to Rotherham council by the Home Office, was told she must “never, ever” again refer to the fact that the abusers were predominantly Pakistani/Muslim men.
Speaking to the BBC’s Panorama programme under the condition of anonymity, the researcher said that she identified more than 270 victims of trafficking and underage prostitution by mainly Muslim gangs in Rotherham. But, despite being sent to Rotherham Council, the report, based on interviews with underage girls seeking help from the council’s anti-child prostitution project, called Risky Business, was never published.
Indeed, the council tried unsuccessfully to sack the researcher after she resisted pressure to change her findings. Data to back up the report’s findings also went missing from the Risky Business office the weekend after she submitted her report, the researcher told the programme.

And on top of all this, check out this headline: “British Police Arrested Parents for Trying to Rescue Their Daughters from Islamic Rape Gangs”. The article begins:

Imagine finding out that your young daughter is being regularly gang-raped by a mob of Muslim pedophiles. You go to police, only to be called a racist, a bigot, and a hate-monger. When police refuse to help, you go to the house where your daughter is being gang-raped and you try to rescue her. The pedophiles then calmly call the police and have you arrested for trying to rescue your daughter from being gang-raped. This is reality in Rotherham, England. And if you don’t approve, you’re a racist, a bigot, and a hate-monger.

Wow, what absolute insanity: let’s just allow children to be tortured and raped, because that is less important than not offending Muslims and rocking the PC boat. This is utterly despicable and diabolical: poor little children sacrificed at the altar of multicultural madness.

Between creeping sharia and runaway political correctness, the West is just about gone. And as it crumbles away completely, how many more children will face an equally horrific fate at the hands of these people?

17 Replies to “PC and the Rape of Children”