In Islam Muhammad is seen as the perfect example of life and conduct for Muslim males. Thus if he had many wives, then they can too. While Muhammad was granted special privileges and thus had around 13 wives (see sura 33:50), ordinary Muslims are restricted to just four wives (sura 4:3).

That polygamy is standard Islamic practice is quite clear. What is not so clear is how this works out in Western nations which have proscribed polygamy. The sad truth is, polygamy is widely practiced by many Muslims in Western nations, and we even subsidise all this through our tax dollars.

The Koran, hadith and authoritative texts on Islamic jurisprudence all speak to the place and regulation of polygamy. And the way it is usually carried out makes it quite conducive for Muslims in the West to get away with this with impunity.

The classical Islamic law manual by 14th-century scholar al-Misri, Reliance of the Traveller, (recently translated into English) for example says it is “illegal for a man to house two wives in the same lodgings unless they both agree” (Book M10.2). Most Muslims indeed prefer that they live separately, and in the West, this is quite helpful for getting government (taxpayer) assistance.

One wife can live with the Muslim husband while the other three live elsewhere, and they can then collect things like the sole parent pension. Since many of these marriages are unregistered, they can easily get away with this. This is a big problem not just in Australia but around the West. 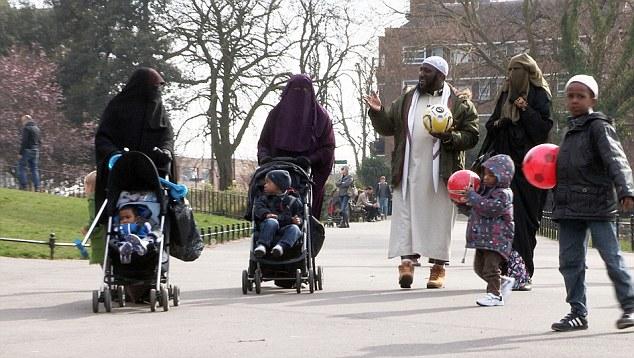 Just yesterday we had this shocking headline coming out of England: “Strolling in a park, a London businessman and his THREE wives – just one of up to 20,000 such multi-wife marriages in polygamy Britain.” The article opens with the story of Nabilah Phillips who gave up her studies at Cambridge University and a future successful career, to enter into a polygamous marriage with the businessman. The article continues:

Nabilah, her husband and his two other wives are part of a growing number of polygamous marriages taking place in Britain. They are rubber-stamped under Sharia law, which considers polygamy completely legitimate as Muslim men are permitted to take up to four wives. It is, of course, in complete contradiction to UK law, under which bigamy is illegal and can result in a prison sentence of up to seven years.
But as such marriages are not recognised by English courts — and around 70 to 75 per cent of Muslim weddings go unregistered — those who marry under the system are not subject to prosecution. As a result, the practice is becoming increasingly commonplace across Britain, with 20,000 polygamous marriages now estimated to have taken place here.

But getting back to Australia, we have a history of this occurring, and many Muslim leaders have been rather open about it all. Let me just mention a few items here. For example, back in 2001, the ABC TV religion show Compass with Geraldine Doogue had an interview with the “founder of Victoria’s Islamic community,” Sheikh Fehmi Naji El-Imam. In it was this amazing exchange:

Narrator:
In Islam, sex outside marriage is forbidden, so marriage is positively encouraged. Muslims rarely marry outside their religious group and while this couple probably take it for granted they can have a wedding according their custom, in Australia this is a relatively new occurrence. Islam recognises polygamy so prior to 1968 Imams like Sheikh Fehmi were not permitted to celebrate marriages.
Sheikh Fehmi:
It used to be at the time the late Mr Snedden he was the Attorney General. So I had a good meeting with him one day and tried to convince him that it is important for the Muslim to marry their own people. But he used to say to me, Well you know Sheikh Fehmi that you Muslims may marry more than one and when we are not allowed to let anybody here for have only one wife. I said to him, listen to me please you may register the first one and don’t worry about the second one. He laughed and said all right we won’t have anything to do with the second one. I stopped at the idea and at the time we had gained recognition from the Attorney General for all our Imams around Australia from that year onward.

Incredible! And that is basically what we have happening here. Polygamy may well be illegal in this country, but the authorities are effectively turning a blind eye to it, and are refusing to prosecute cases of this occurring here. Only when it was revealed just how much underage forced marriages are taking place that a bit of a crackdown occurred. I wrote that episode up here: billmuehlenberg.com/2014/06/14/this-is-sydney-not-saudi-arabia/

Let me cite more of our recent history on this. Back in 2009 Keysar Trad, president of the Islamic Friendship Association of Australia, actually had a piece in the Sydney Morning Herald asking, “Why should polygamy be a crime?” In it he admits that most of these marriages are unregistered:

There is no requirement for such a union to be “legally” registered with a secular body that does not recognise the clauses in a Muslim union. Plural relations of this nature that take place in Australia are treated like de facto relationships and are not registered. This keeps them outside the ambit of the nation’s criminal and marriage laws. Such unions are not considered adulterous because they follow the rules of an Islamic union. They are not secret and they carry no stigma under God.

And as already mentioned, it is not just a case of Australian laws being broken here, but taxpayers having to fund this Islamic lifestyle. Consider a 2010 headline: “Growing number of Muslim men and multiple wives exploiting loophole for taxpayer handouts.” The article begins:

A growing number of Muslim men and their multiple wives are exploiting a loophole to get taxpayer handouts. Centrelink has confirmed it has investigated up to 20 cases of multiple relationships, including polygamy, in the past two years for payment irregularities. It has forced some families to pay money back.
Polygamy is illegal in Australia, but a Centrelink spokeswoman said it was not the welfare agency’s job to police polygamy laws. “It’s not our concern if they are a member of a polygamist relationship,” the spokeswoman said. “We look at whether they are receiving the correct rate of payment. We treat each couple independently.”
But Islamic Women’s Welfare Council of Victoria director Joumanah El Matrah said some men were exploiting Australia. “It (polygamy) was a minority but it’s certainly a growing minority because Muslim men realised it was possible to get away with it,” she said. She said Muslim men who took more than one wife and relied on Centrelink payments to support their families were not following Islamic law, which dictated they could only take multiple wives if they could afford it.

A year later a legal expert penned a piece about “Sharia law at work in Australia”. The article opens:

Sharia law has become a shadow legal system within Australia, endorsing polygamous and underage marriages that are outlawed under the Marriage Act. A system of “legal pluralism” based on sharia law “abounds” in Australia, according to new research by legal academics Ann Black and Kerrie Sadiq. They have found that Australian Muslims have long been complying with the shadow system of religious law as well as mainstream law.
But in family law, not all Muslims were registering their marriages and some were relying on religious ceremonies to validate unions that breached the Marriage Act. This included “polygynist marriages”, in which a man takes multiple wives, and marriages where one party is under the lawful marriage age. Their research, which will be published on Monday in the University of NSW Law Journal, says that the wider community has been “oblivious to the legal pluralism that abounds in this country”.

All this is just the tip of the iceberg. Australia already has a two-tiered legal system, with sharia family law largely running unchecked. And when multiple wives with numerous children exist, largely in unregistered marriages, the system is wide open for abuse, and they can claim taxpayer-funded handouts, pretending to be single parents.

So the clear law of the land is being broken, and ordinary law-abiding citizens are being forced to subsidise polygamy and sharia law in Australia. This must stop. The rorting of the system and the relentless creeping sharia are a recipe for disaster, and must be named and shamed by the authorities.

In the case of child brides mentioned above, only a slap on the hand took place over that one – the Muslim cleric got a mere $500 fine before being sent back to Pakistan. It is time our leaders get serious about all these related problems: the abuse of the welfare system, polygamy, child brides, human trafficking and forced marriages.