Sometimes the most clueless and brainless people around are sadly those who call themselves Christians. They have such a warped understanding of their own faith that they can often say and do the most idiotic and unhelpful things imaginable.

And worse yet, often these things done by well-meaning but biblically undiscerning Christians can in fact do great harm to the faith. So intent are they to be more loving and compassionate than Jesus, that they are often just clueless wonders doing the enemy’s work.

But hey, they are left with a warm fuzzy feeling inside, so I guess that is all that matters. They feel good about themselves and think they are somehow doing God a favour. Never mind that they instead are bringing in unhelpful and unbiblical compromise and syncretism.

Imagine this scenario from around 75 years ago. Some Christians with a soft spot in their hearts – but with an equally soft spot in their heads – have decided to show Christian love and acceptance of the Nazis. After all, we are to love everyone equally they insist, and we cannot judge other people – we are all equally bad.

So they actually walk around America and Australia in Nazi outfits to show Christian “solidarity” with their German brothers. They want to show God’s love for all people, and they want to break down harmful prejudices and stereotypes. They want to demonstrate that Christians are not judgmental or bigoted, but are inclusive of everyone.

Now if that scenario sounds just a bit dodgy to you, well, it should. But that is the exact same situation we find ourselves in today with clueless and biblically illiterate Christians doing everything they can to make those in false religions feel good. 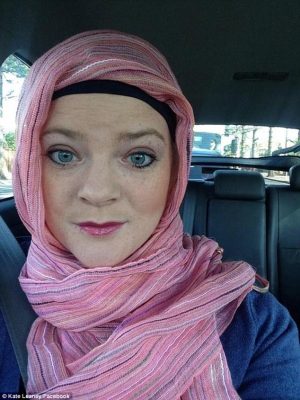 They are holding one interfaith service after another, and even dressing up like Muslims to show their support. Consider several recent news items on this. The first involves a Christian gal who wore the hijab to show her “solidarity” with Muslims. The story opens:

For the past seven days Kate Leaney, 27, a committed Christian, has attracted curious looks on the street. That’s because she has been wearing a hijab everyday in an act of ‘love and solidarity’ with her many Muslim friends. Recently, mates of the asylum seeker worker, who is from Adelaide, have said they are scared to wear the head-dress in public. Their concerns followed incidents in the past few weeks involving alleged terror suspects as well as a rise in reported anti-Islamic attacks.
‘After the news I saw on TV, I don’t want to tell people I’m a Muslim!’ one friend texted Ms Leaney. ‘I think Australians don’t like Muslims!’ So last week she decided to take a stand, don the headscarf and send a message of ‘love over fear’. On the seventh day of wearing her headscarf, Ms Leaney today told Daily Mail Australia that it had been an interesting, although sometimes confronting, experience. On the one hand, the reaction from her friends was ‘overwhelmingly positive’. Many friends who wore a headscarf thanked her for her efforts.

And in Queensland we have all sorts of well-meaning but rather clueless Christians worshipping together with Muslims:

Christian and Muslim communities have taken part in an interfaith service at a mosque in Brisbane’s south to condemn religious violence. More than 20 Anglican, Baptist, Catholic and Uniting Church leaders joined Muslim leaders at Kuraby mosque to make a public stand against intolerance. It followed incidents including members of the Muslim community being verbally abused and vandalism at Mosques and Islamic centres in and around the Brisbane and Logan areas.

And as part of this article, there was also a related report:”Maroochydore priest condemns mosque protesters”. It begins:

Meanwhile a Catholic priest on the Sunshine Coast condemned a protest against a proposed mosque. Hundreds of people came to verbal blows with the building’s supporters at a protest in Maroochydore last weekend. Father Joe Duffy wrote a letter of support for the Muslim community’s plan to establish the mosque metres from the Stella Maris Church in Maroochydore after the heated protest on Saturday.

So what are we to make of all these gestures? As I say, they may all well have good intentions, but good intentions alone are never enough. Our intentions should always line up with the Word of God, and not be mere emotional reactions, or a misplaced sense of compassion, or a worldly understanding of tolerance.

Our intentions must always be backed up by understanding and truth. It is clear in the last example I gave that this priest is utterly clueless as to the place of the mosque in Islam. It has nothing to do with what a church in Christianity or a synagogue in Judaism is about. But I speak to this in detail here: billmuehlenberg.com/2014/03/28/the-significance-of-the-mosque/

Now, are Christians to love Muslims, or atheists or Satanists or cultists for that matter? Absolutely. But of course you don’t love them by defending their false worldview, by telling them they are just fine as they are, and by pretending that their beliefs are no better or worse than your beliefs. That is called syncretism and compromise, and that is how we destroy the gospel of Jesus Christ.

When Paul came to Athens with all of its idols and false gods, he did not seek to establish an interfaith service, or promote religious harmony, or set up an ecumenical movement. In fact, we are clearly told that Paul was “grieved in his spirit” (Acts 17:16) over all these idols and false belief systems. Thus he debated with the Athenians in the hope of showing them biblical truth.

Sure, he sought to build bridges with them and so he quotes a few of their poets and philosophers. But this was certainly not in the interests of just getting along, or of showing solidarity with people of other faiths. He built apologetics bridges in order to reach them for Christ and deliver them from their false and dead-end religions.

It never would have occurred to Paul or the disciples that the love of Christ somehow meant embracing all other worldviews and religions, and just hoping we can get along and hug each other a lot. They were intent on delivering people from the clutches of satanic idols to true freedom in Christ.

And if that sounds a bit strong, consider what Paul said about these matters. In Colossians 1:13 Paul says that Christ “has delivered us from the power of darkness”. In Galatians 4:8 he says, “Formerly, when you did not know God, you were slaves to those who by nature are not gods.” And in 1 Thessalonians 1:9 he speaks of those who “turned to God from idols to serve the living and true God.”

People without Christ, worshipping false gods and false religions, do not need encouragement, support, praise or a show of solidarity. They need to be delivered from their false religions and their dead idols. That is what Jesus and the disciples did, and that is what we should be doing.

But today the church is up to its ears in the worship of worldly and carnal idols of tolerance, acceptance and inclusion. We think being Christlike is to embrace every false teaching and every false religion, in the name of being non-judgmental.

That is called compromise, syncretism, and appeasement. It is not the way of Christ. So if these folks really want to do some good, and want to show some real Christian love, they should start doing what the early church did, instead of just going along with the world and its secular anti-Christian agenda.

12 Replies to “Good Intentions Are No Match for Stupidity”