On most occasions when you hear about a church or a pastor seeking to be relevant, you should run for the hills. That is because nine times out of ten, they are willing to abandon clear biblical teachings simply to be likeable, popular and accepted by the masses.

There is probably no bigger reason why we have so much compromise, carnality and cowardice in our churches today than because of this wretched desire to be “relevant”. Trying to please the masses almost always means we will be displeasing God. 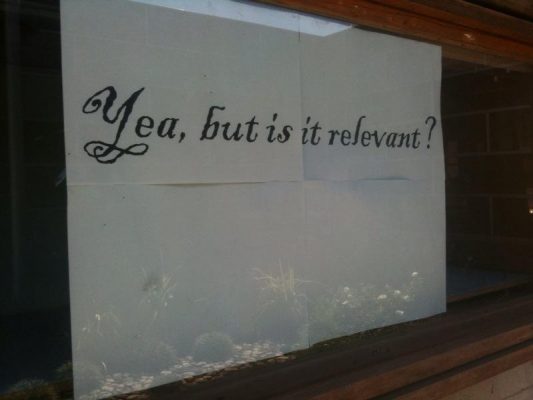 The great trouble with this lousy desire to be relevant is that almost always the truths of the gospel are watered down to make them acceptable to sinners. Instead of leading sinners to a holy and pure Saviour, we dilute the message and weaken the Saviour, so that he becomes palatable and attractive. But that is a recipe for disaster.

As Dorothy L. Sayers so rightly wrote: “If all men are offended because of Christ, let them be offended; but where is the sense of their being offended at something that is not Christ and is nothing like him? We do him singularly little honor by watering down his personality till it could not offend a fly. Surely it is not the business of the Church to adapt Christ to men, but to adapt men to Christ.”

But we see this everywhere in the churches today. Jesus shrinks so that our congregations (and weekly collections) might expand. We offer a minimalist, saccharine sweet Jesus who would not hurt a fly so that we can get the masses into our churches and keep them there.

It seems every day we find more examples of this. The recent controversy over Hillsong is just another case in point. And sure enough, the need to be “relevant” was at the heart of how Pastor Houston defended their reluctance to proclaim biblical truth on vital moral issues of the day such as human sexuality and marriage and family.

Indeed, his “clarification” really only made matters worse. It really clarified nothing. Consider for example this claim by Houston: “The problem is that it impossible in a few sentences to provide a scripturally based, theological nuanced, pastorally sensitive, and culturally postured response to questions on this topic.”

Umm, no it isn’t. Moses, Jesus and Paul all managed to do it for example. They all offered powerful, clear, truthful and authoritative teachings on this issue – all in just a sentence or two. But these modern guys think they must improve upon those that we find in Scripture.

All this just to be “relevant”. And sadly the legion of Hillsong groupies have been quite insufferable here. It is as if Houston is their infallible pope who must be defended at all costs. Never mind what he may say or do, he is to be rallied around ferociously.

And I have experienced plenty of that of late. I just wish these same people would show half as much zeal and commitment in defending Jesus Christ and the clear teachings of Scripture. As just one example, consider what this Houston defender actually said to me:

“If Jesus didn’t talk about homosexuality publicly, why should Pastor Brian? It’s obvious that our Hillsong Pastors wouldn’t support Gay marriage, but whats the point of addressing it publicly if Jesus didn’t?” Wow, incredible. People claiming to be Christians actually come out and say such silly and unbiblical things. My reply was this:

“Jesus didn’t address the need to liberate slaves, so by your reasoning, neither should have Wilberforce. By your silly reasoning, we should never speak out against rape, sexual slavery, racism, or abortion because Jesus didn’t. Puh-leeese. Refusing to speak out on the most important moral and biblical issues of the day is a clear sign of compromise, cowardice and carnality.”

Now it was really not my intention to once again revisit the Hillsong situation. But a brand new piece by one of the great men of God in the US really needs to be quoted from. I refer to Michael Brown’s article, “On Gay Marriage and the Hillsong Movement: Did Jesus Call Us to be Relevant or Biblical?”. He writes:

What do we make of the emphasis Pastor Houston put on being relevant? As he explained in his statement, “this struggle for relevance was vexing as we did not want to become ostracized by a world that needs Christ.” On the one hand, I totally affirm his heart to remove every possible stumbling block that could stand in the way of our witness to the lost. This was Paul’s method as well, as he explained, “I have become all things to all people, that by all means I might save some” (1 Cor 9:22).
This means that we use cultural sensitivity and do our best to speak a language that people understand, always being motivated by love for God and love for souls. Obviously, Hillsong has been very successful in doing this. At the same time, there is a tremendous danger in our pursuit of “relevance,” since what the world thinks it needs is not always what it really needs, nor do God’s methods mirror our methods.
As Paul wrote in the very same letter to the Corinthians, “For Jews demand signs and Greeks seek wisdom, but we preach Christ crucified, a stumbling block to Jews and folly to Gentiles, but to those who are called, both Jews and Greeks, Christ the power of God and the wisdom of God” (1 Cor 1:22-24).
All too often – and I say this for all of us, not specifically for Hillsong – being “relevant” can become the code-word for compromise, and whenever we seek to make the gospel more palatable by watering it down and removing its offensive elements, we hurt people rather than help them. Looking at this from another angle, if Christians through the ages had put more emphasis on relevance than obedience, they would not have been mocked, rejected, imprisoned, or killed for their faith.

I fully relate to what he says next:

When the Lord graciously saved me in 1971 as a 16-year-old, heroin-shooting, LSD-using, Jewish hippie rock-drummer, my entire world consisted of drugs and rock music and ungodly behavior, and my friends and I lived for getting high, going to rock concerts and playing with our band.
My daily music revolved around songs like Led Zeppelin’s “Dazed and Confused” and Jimi Hendrix’s “Purple Haze,” yet the Lord saved my friends and I in a little, Italian Pentecostal church where the men wore ties and the ladies wore dresses and the pastor’s wife played old hymns on the piano. But the Lord’s presence was so real and His Word so clear that we were all wonderfully born again in a totally foreign setting. Is there a lesson for us here?

We share very similar stories. I was also a drugged-out hippy who got saved in 1971 at the age of 18. I too loved the acid rock of Cream, Hendrix and others. But God actually used two old ladies and their home Bible study to get me turned around.

They never once spoke about this long-haired, bare-foot hippy who had not had a bath in ages. They took me in and shared the Word of God – that is all. No desire to be “relevant” or cool or trendy. Just a love for God and his Word. That is all that is ever needed. For more on my story see here: https://billmuehlenberg.com/2012/06/27/coming-home-my-testimony-part-4/

I personally love contemporary worship, and I appreciate fine musicianship and gifted singers, as well as having an ethic for doing things with excellence. The Lord can certainly use this too. But it’s so easy to put our emphasis in the wrong places, as if slick presentation was more important than the Spirit and professionalism was more important than the Presence. Let us always be careful not to put relevance before obedience and not to water down the Word in order to avoid offense.
Put another way, we must not use the shifting tides of culture and the fickle opinions of people as our guide for life and ministry. Instead, we must seek to emulate Jesus in thought, word, and deed, lifting Him up without shame (which includes lifting up His life-giving standards of holiness and purity). If we do, the hungry and thirsty will come.
Pastor Kris Vallotton put it well: “We are not called to reflect our culture we are called to transform it. Becoming darkness to be relevant to a world of immorality is not the pathway to progress, but the process to the cesspool of hopelessness.”

Quite so. Away with all this unbiblical trendiness and relevance. Just give me Jesus, the Holy Ghost, and the Word of God. These are sufficient. Let me finish with two “relevant” quotes here (pun intended):

“There is a passion today to be relevant. This, I believe, is one of the gods of the modern church. We will go to great lengths to prove that the message fits in nicely with the culture around us.” A W Tozer

26 Replies to “The Curse of Relevance”