I have said this plenty of times before and I will say it again: when you are leading a megachurch, there is massive temptation to keep the masses happy and the money flowing by telling people what they want to hear instead of what they need to hear.

The fear not to alienate anyone or offend anyone or upset anyone can almost become a god, with everything done to keep the masses comfortable, happy and entertained. Thus no controversial subjects will be raised, no hard doctrines spoken to, and no political controversies will be courted.

Of course this has been standard operating procedure for megachurch pastors like Joel Osteen and Brian Houston for years now. I have written about both often, including on their refusal to proclaim biblical truth in these key areas. See here for example: billmuehlenberg.com/2013/12/27/keeping-the-masses-happy-while-keeping-god-unhappy/ 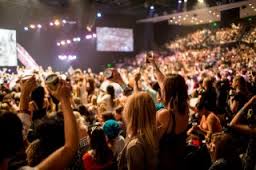 And when the homosexual press write articles about how pleased they are with the way Hillsong is moving, then you know we are in trouble. See here for example: www.gaystarnews.com/article/hillsong-megachurch-pastor-says-church-should-be-more-understanding-gays270813

These leaders will try to claim that an issue like homosexuality is not a gospel issue, and that they are not into talking about such matters. Well, they most certainly are gospel issues. God’s intentions for marriage and family and human sexuality are found throughout Scripture, beginning in Genesis and ending in Revelation.

And Jesus spoke often about all three. Yet these leaders think we should stay silent on them, or even make peace with the world on these matters. That is called capitulation, compromise and carnality. It is not called standing strong for biblical truth.

Houston was again asked about this issue recently, and he again tried to downplay and dodge the issue. Here is how an article from the Huff Post describes this:

At a press conference for the Hillsong Conference held in New York City Thursday, New York Times‘ Michael Paulson asked Houston directly about his stance on same-sex marriage. In an unofficial transcript provided by Jonathan Merritt, Houston responded:
It can be challenging for churches to stay relevant. Because many mainstream churches upheld what they would believe is the long established view of what the Bible says about homosexuality. But the world has changed around and about them. On the subject, I always feel like there’s three things. There’s the world we live in, there’s the weight we live with, and there’s the word we live by. The world, the weight, and the word….
And they don’t all necessary align. With the word we live by, many people have various convictions. In the middle of it all know that Jesus when it comes to people would let nothing stop Him from breaking through a divide to help hurting, broken, everyday normal people like you and I.

And according to CharismaNews, this was how his reply went: “Houston would not offer a definitive answer, instead saying that it was ‘an ongoing conversation’ among church leaders, and they were ‘on the journey with it’.”

Um, talk about refusing to give a direct answer. Talk about equivocation and offering a bunch of mealy-mouthed nothingness. Just what in the world did all that mean? Jesus was not afraid in the least to directly affirm God’s intentions for sexuality. Paul was not afraid to say that homosexuals would not inherit the Kingdom of God.

But all we can get out of this pastor is more gobbledygook. There was no “conversation” for the writers of Scripture on this. There was no talk of being on a “journey” for Jesus and the disciples when it came to such matters. But then again, they were not trying to keep people happy, please the masses, and keep that hefty weekly offering flowing in.

They were into fearlessly and unashamedly proclaiming biblical truth – on all matters, not just the non-PC ones. The prophets and disciples were entrusted with the truth of God to proclaim, and they did that, regardless of the reaction of the crowds.

But our big cheese pastors today dare not speak out on any vitally important social or moral issue, for fear of rocking the boat, upsetting the flock, and losing that money flow. The contrast between the true gospel proclaimers and the false could not be clearer.

I love how Andrew Walker, wiring in First Things, deals with this issue:

What do we say about this?
First, if I were writing the Art of Cultural War, this is the strategy I’d use to bring the opposing side to heel. The steps look something like this: Relativize the issue with other issues. Be uncertain about the issue. Refuse to speak publicly on the issue. Be indifferent toward the issue. Accept the issue. Affirm the issue. Require the issue. Hillsong is currently on step three. I don’t think they’ll stay there.
Second, a non-answer is an answer. Let’s be very clear on that. It’s also a very vapid answer. What we’re seeing in many corners of evangelicalism is a pliability that makes Christianity an obsequious servant to whatever the reigning zeitgeist is. With non-answers like this, it isn’t Jesus who is sitting at the right hand of the Father. Culture is. Perhaps Hillsong would rather abide by a “Don’t Ask; Don’t Tell” policy on matters of orthodoxy. That’s their prerogative. But let’s be clear that this is not the route of faithfulness.
Third, this isn’t an issue over whether gays and lesbians should or should not be welcomed in church. This also isn’t an issue over whether young individuals within the LGBT community have faced bullying. Bullying of all sorts is deplorable and should be condemned, and not because the Human Rights Campaign says so, but because Jesus says so (Matthew 7:12). What this issue is about is whether the church models faithful obedience to Christ in a way that both honors Scripture and loves its neighbor. Hillsong thinks it’s doing both; but is actually doing neither.
Fourth, Hillsong thinks itself a contemporary and culturally relevant church. Perhaps it is. But as Christians, we don’t get to define what “relevant” means in terms that are unquestioning of what our culture means by “relevant.” I submit that Hillsong is a church in retreat. A church in retreat doesn’t give answers. It doesn’t storm the gates of Hell. It settles and makes peace where there is no peace (Ezekiel 13:10). A church in exile (and that’s how I’d describe the current placement of confessional evangelicalism) is one that is faithful amidst the culture, regardless of whether that culture looks more like America or more like Babylon. It knows that it may lose the culture, but that it cannot lose the Gospel. So be it.

At the end of the day, I think Hillsong’s non-answer answer is rooted in an embarrassment about what the Bible teaches and the church has held since the time of Jesus. The good news is that the truth of Christianity outlasts the untruths of man’s applause.
When I read stuff like this, my reaction isn’t anger. It’s an eye-roll. Churches should know better than to believe the myth that accommodation will swell their ranks. The opposite happens.
Following the Apostle Peter, this all means that judgment begins within the household of God, so I’m not writing for outsiders. I’m writing for the church, to the church. I’m writing about Hillsong, a church or enterprise with enormous global influence. What I see, tragically, isn’t a church grappling with a complex issue. What I see is a church exchanging compassion for cowardliness before culture’s consistory.

44 Replies to “Hillsong, Homosexuality and the Shrinking Gospel”