This weekend some 70,000 Jehovah’s Witnesses from around the world are expected to converge upon Etihad Stadium in Melbourne for an international conference. Since so many JWs will be in town you may well come across some, so it is worthwhile knowing a bit about their origins and what exactly they believe.

The JWs are one of a number of cults which emerged in the US during the mid-nineteenth century. Charles Taze Russell (1852-1916) was an Adventist and a millennialist who first laid roots for the movement in the 1870s. He started a Bible study while in his teens in Pennsylvania. 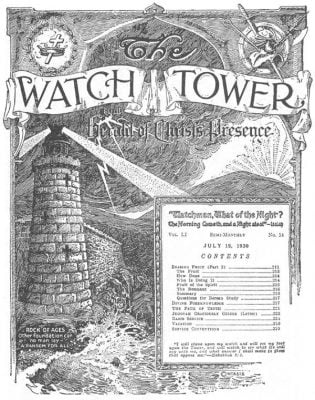 He penned the seven-volume Studies in Scriptures (originally called Millennial Dawn), which he claimed was produced by the enlightenment of the Holy Spirit, and was absolutely essential for understanding the Bible properly. To read the Bible without it would keep people in spiritual darkness he said.

He predicted that the return of Christ would occur in 1874. When that failed to materialise, he reset the date for 1914. A magazine of the group, Zion’s Watch Tower and Herald of Christ’s Presence was launched in 1879. J.F. Rutherford (1869-1942) succeeded him, and the group’s present name was adopted in 1931. He especially emphasised the use of the name for God, Jehovah.

He altered some of Russell’s beliefs, including the idea that the true church consists of only 144,000 saints from the time of Christ to 1914. This did not allow for growth, so he added other classes of true believers. He too set wild and whacky dates, including 1925, when Abraham, Isaac and David were said to rise from the dead.

Nathan Knorr took over the reins when Rutherford died in 1942. During his time as leader the organisation mushroomed, with its membership growing from just over 100,000 to more than two million. Also during his leadership, they produced their own version of the Bible, the New World Translation in 1961. It reflected the group’s errant beliefs and cultic teachings.

In 1977 when Knorr died, Frederick Franz took over. Upon his death in 1992, Milton George Henschel became president until his death in 2003. In 2000 some major organisational change took place, and Don Alden Adams is now the current president.

So just what are some of the core teachings of the JWs, and how do they contrast with biblical orthodoxy? First and foremost, they rigorously deny the doctrine of the trinity, and claim that Jesus was the first creature that God made. Indeed, Christ was merely the physical manifestation of the archangel Michael. They even deny that Christ died on a cross, but just an upright pole, so they see the cross as a pagan religious symbol.

The Holy Spirit is also denied deity, and is said to be just an active force rather than a personal being. In their Bible, they famously change core biblical teachings to fit their heretical beliefs. Thus John 1:1 is changed from “the Word was God” (referring to Jesus), to “the Word was a god”. They also claim that God is not omnipresent but is limited to a specific location.

Like most cults, they claim that true Christianity died off long ago, just after the original disciples died, and God raised them up to resurrect the one true faith. They claim to be the one and only true church of God, and all others are deceivers and apostates. All other beliefs and teachings are branded as the lies of Satan.

The 1914 coming of Christ was rebranded as an invisible coming, and they claim Christ set up his heavenly Kingdom then, working through his chosen vessel, the Watchtower Society, based in Brooklyn, New York. Armageddon is coming, in which God will wage war against all mankind, except the JWs. Among the first things to be destroyed are the churches of Christendom.

They also deny the reality of hell, and teach a doctrine called annihilationism, which says the unrighteous will not live forever, but will just be annihilated. As to the true believers, only 144,000 will go to heaven, with the rest of the faithful living on earth forever.

They refuse to allow for blood transfusions, viewing this as a serious sin (based on a faulty understanding of passages such as Leviticus 7:26-27; 17:13-14). Because of this erroneous teaching, a number of JWs have prematurely died. They also view all holidays as being evil, be it Easter or Christmas or even Mother’s Day, and the celebration of anyone’s birthday is strictly forbidden. Faulty interpretation of texts like Galatians 4:10 is responsible for some of these teachings.

Each member is expected to spend 10 hours each week in door to door evangelising, with others doing much more than that. Like all cults, they deal severely with any recalcitrance or disobedience, including disfellowshipping any reprobates.

Salvation is only possible through full obedience to all the Watchtower Society commands. So it is a works-based salvation, instead of justification seen as solely by grace through faith. Indeed, Russell wrote that everlasting life is a reward for those who obey and do such good works.

Like many cults, people are attracted to the JWs for various reasons. One big reason is that most churches do such a poor job of actually training their own people in biblical truth. Doctrine is seldom emphasised, and basic Christian beliefs are often never even learned. Thus many people in mainline churches, including many Catholics, end up being sucked into the JW cult.

So much of even the evangelical church today offer loads of celebrities and entertainment, but very little doctrinal and theological truth. Thus people with such a watery and vapid faith are easy pickings for the cults. The JWs will seem to be authoritative and seem to know what they are talking about, and will easily quote from their version of Bible. They are pre-programmed with stock answers to deal with most questions thrown their way.

That leaves far too many people today easy prey for such groups. So if you meet any of these folks this weekend, or if they come knocking on your door with their Watchtower magazine, my advice is not to enter into a debate with them unless you know what your own faith is about. Sure, it can help to know what a cult like the JWs believe, but it is even more important to know what you believe as a Christian.

It is said that bank tellers are trained to spot counterfeit money, not by mastering the various fakes out there, but by mastering the real thing. They know the original so well that they can pick a counterfeit a mile away. This is how we should be operating. We should know our own faith so well, and have such a solid grasp of the Word of God, that we can spot a fake teaching, a cultic practice, or an aberrant theology a mile away.

Anyone who has a clear and proper grasp of basic biblical teachings will readily be able to discern the many flaws, heretical beliefs, and false doctrines of the JWs and other cults. All the more reason why Christians today must be reading and studying their Bibles daily, taking the time to master core biblical truths.

Theology matters, and false theology – as with the Watchtower Society – will lead people to hell, even if they don’t believe in hell.

For those seeking more information, there are numerous groups of ex-JWs out there who have found the real Christ and the real Bible. Here for example is one such group: 4jehovah.org/

And there are many good books for those wanting to take all this further. Here are just some of the good ones:

18 Replies to “Jehovah’s Witnesses: When Cultists Come To Town”