So who qualifies as the most annoying, the most irksome, the most controversial, and the most rejected preacher of all time? While many might come to mind, there are many who certainly would never fit the bill. There are many who are so well-liked, so loved, and so adored, that one could never think of them as causing any trouble or raising a ruckus.

Many of our big-time preachers today, including those in the biggest churches in the West, are so committed to men-pleasing, to telling people what they want to hear, and to never rocking the boat, that they are perpetually loved and adored by the masses. 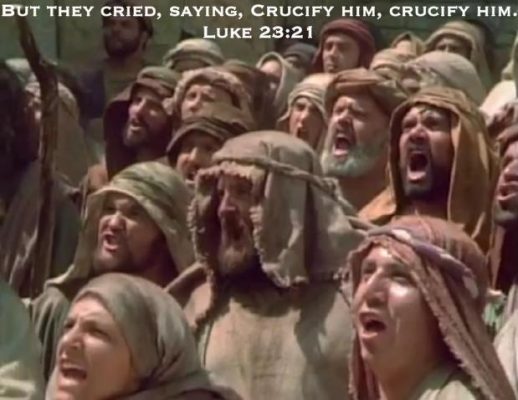 It could never be said of them that they made enemies, caused division, provoked anger, and caused great disturbances wherever they went. They are so wishy-washy in their preaching and so intent on keeping the crowds happy and so docile that they will never utter a hard word, never take a stand for anything controversial, and never seek to upset anyone.

In the most marked contrast imaginable, there was a preacher who did all these things – and for that he was crucified. The world’s most troublesome preacher without a doubt was Jesus Christ. He is so utterly unlike so many of today’s popular men-pleasing preachers.

I am once again struck by this as I reread the gospels. As I am going through John right now, let me simply focus on this one gospel, and take only one part of it. But the verses contained here make it overwhelmingly clear how different Jesus was from so many preachers of today.

I will look at just John 5-12. These chapters are jam-packed with explosive confrontations, hard-core power encounters, and cases of incredible controversy and conflict. Jesus seemed to have this impact wherever he went. He sure knew how to provoke a reaction.

And so often that was a very negative reaction. He seemed to make enemies readily! Of course this is spelled out for us at the very beginning of John’s gospel. In John 1:11 we read: “He came to that which was his own, but his own did not receive him.”

Thus very early on we are informed that Jesus was not going to have an easy ride, but would be causing controversy and getting folks upset. In these eight chapters of John we find this occurring repeatedly. Consider the way Jesus was constantly causing division amongst the people:

-John 7:12 Among the crowds there was widespread whispering about him. Some said, “He is a good man.” Others replied, “No, he deceives the people.”
-John 7:30-31 At this they tried to seize him, but no one laid a hand on him, because his hour had not yet come. Still, many in the crowd believed in him.
-John 7:40-43 On hearing his words, some of the people said, “Surely this man is the Prophet.” Others said, “He is the Christ.” Still others asked, “How can the Christ come from Galilee? Does not the Scripture say that the Christ will come from David’s family and from Bethlehem, the town where David lived?” Thus the people were divided because of Jesus.
-John 9:16 Some of the Pharisees said, “This man is not from God, for he does not keep the Sabbath.” But others asked, “How can a sinner do such miraculous signs?” So they were divided.
-John 10:19-21 The Jews who heard these words were again divided. Many of them said, “He is demon-possessed and raving mad. Why listen to him?” But others said, “These are not the sayings of a man possessed by a demon. Can a demon open the eyes of the blind?”
-John 11:45-46 Therefore many of the Jews who had come to visit Mary, and had seen what Jesus did, believed in him. But some of them went to the Pharisees and told them what Jesus had done.
-John 12:37-43 Some people believe, some don’t.

And it was not just the crowds who were divided because of Jesus. Even his own disciples were divided, with some choosing to no longer follow him. John 6:60-67 makes this very clear:

On hearing it, many of his disciples said, “This is a hard teaching. Who can accept it?” Aware that his disciples were grumbling about this, Jesus said to them, “Does this offend you? What if you see the Son of Man ascend to where he was before! The Spirit gives life; the flesh counts for nothing. The words I have spoken to you are spirit and they are life. Yet there are some of you who do not believe.” For Jesus had known from the beginning which of them did not believe and who would betray him. He went on to say, “This is why I told you that no one can come to me unless the Father has enabled him.” From this time many of his disciples turned back and no longer followed him. “You do not want to leave too, do you?” Jesus asked the Twelve.

His words were so hard and non-negotiable that his own followers finally had enough. And the scale of negative reaction continues to rise. Plenty were mumbling and grumbling about what he said and did. We already saw this above, and in John 6:41-43 we read about how the Jews began to grumble about Jesus. And as also already seen, some critics accused Jesus of being demon-possessed. Other texts also speak to this:

Of course the negative reactions soon bubbled over into hatred. As we read in John 7:5-7: “For even his own brothers did not believe in him. Therefore Jesus told them, ‘My time is not yet here; for you any time will do. The world cannot hate you, but it hates me because I testify that its works are evil’.” And as we read later, Jesus told his disciples that just as the world hated Jesus, so too it will hate his followers (John 15:18-25).

And this hatred became so intense that it led to a deep desire to kill him:

-John 5:16-18 So, because Jesus was doing these things on the Sabbath, the Jewish leaders began to persecute him. In his defense Jesus said to them, “My Father is always at his work to this very day, and I too am working.” For this reason they tried all the more to kill him; not only was he breaking the Sabbath, but he was even calling God his own Father, making himself equal with God.
-John 8:59 They picked up stones to stone him.
-John 10:31-39 The Jews try to stone Jesus for blasphemy.
-John 11:8 “But Rabbi,” they said, “a short while ago the Jews there tried to stone you, and yet you are going back?”
-John 11:53 So from that day on they plotted to take his life.
-John 12:10 So the chief priests made plans to kill Lazarus as well.

Remember, this is just one of the four gospel accounts, and these are just some of the chapters from that final gospel. But from this small sampling of the evidence, it is crystal clear that Jesus always made an impact on people. Sometimes they loved him, but just as often they hated him.

Neutrality was certainly not an option it seems. He stirred people up big time, and so often people went absolutely ballistic over him and his words. It is obvious that Jesus did not have the slightest intention of pleasing people and making everyone happy. He was determined to speak truth, knowing that it would produce a ferocious negative response from so many.

So why in the world do we think we will get a better reaction than Jesus did if we faithfully and fearlessly proclaim his word? The world hated Jesus and it will hate us as well. That is guaranteed. As Leonard Ravenhill put it, “Why in God’s name do you expect to be accepted everywhere? How is it the world couldn’t get on with the holiest man that ever lived, and it can get on with you and me?”

Martyn Lloyd-Jones said this: “You can really test what is being preached by one particular criterion, and it is this: the gospel of Jesus Christ is always offensive to the natural man. . . . If you find the natural, unregenerate man praising either the preacher or his message then, I say, you had better examine that preaching and that preacher very carefully.”

Or as George Whitefield remarked, “It is a poor sermon that gives no offense; that neither makes the hearer displeased with himself nor with the preacher.” It is time we started earning a few lessons from Jesus, the greatest preacher who ever lived.

5 Replies to “The World’s Most Hated Preacher”