The West once prided itself in celebrating freedom and promoting genuine diversity. But this is no longer the case. England for example may well be gone. So thorough and so consistent has the Islamisation of the once great Britain been that one is left wondering if it will soon become the first Western locale with a Muslim majority and full Islamic law.

Evidence is everywhere, and it certainly does not look very good. Every day the headlines inform us that England is on the verge of becoming a Muslim nation, and those who don’t like it can just pack up and leave. The numbers alone tell us the story. 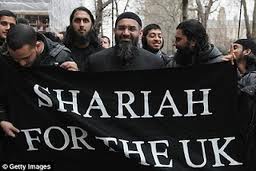 For years now we have known that demographics is radically transforming England. Between immigration and high birth rates for Muslims, the nations is being transformed right before our very eyes. And in the meantime Englishmen are aborting themselves out of existence.

New census figures bear this out. Consider this headline: “The changing face of Britain: A child in Birmingham is now more likely to be a Muslim than Christian”. The article begins:

There are more Muslim children than Christian growing up in Birmingham, figures show. The latest statistics, extracted from the 2011 Census, give an insight into the fast pace of demographic change across Britain. They pinpoint several parts of the country where traditional religious beliefs are being eclipsed for the first time.
In England’s second city of Birmingham, of 278,623 youngsters, 97,099 were registered as Muslim compared with 93,828 as Christian. The rest were of other faiths such as Hindu or Jewish, or none. A similar trend has emerged in the cities of Bradford and Leicester, the towns of Luton, in Bedfordshire, and Slough in Berkshire, as well as the London boroughs Newham, Redbridge and Tower Hamlets, where nearly two-thirds of children are Islamic.
Last night experts said more must be done to ensure that society does not become polarised along religious lines. Professor Ted Cantle, of the ICoCo Foundation, which promotes community cohesion, said: ‘What we are seeing are several trends running together. There is a long-term decline in support for the established religions, notably Christianity; continuing immigration from the Asian sub-continent; and higher fertility among the Muslim population, which has a considerably lower age profile.

And with so much Islamic influence, no wonder we hear Muslim leaders slamming Western values while pushing for sharia law. Check out this excerpt from a recent article:

British Islamist Abu Rumaysah said he wants to see every woman in the UK “covered from head to toe.” Rumaysah and his Islamist confidants patrol the streets of East London, chastising British citizens for not complying with Islamic law. In a series of videos, they can be seen harassing women for inappropriate dress, rebuking men for drinking alcohol, and calling a man “dirty” on the suspicion that he is gay.
“Ultimately, I want to see every single woman in this country covered from head to toe,” Rumaysah told 60 Minutes correspondent Clarissa Ward. “I want to the see the hand of the thief cut. I want to see adulterers stoned to death. I want to see sharia law in Europe, and I want to see it in America, as well. I believe our patrols are a means to an end.”
Rumaysah told Ward that Western Democracy was a “barbaric” system and that he should be free to “choose” Islamic law and enforce it as he sees fit. He even told Ward to cover herself up.
“Why can’t I tell you to cover up? Am I free to say that?” Rumaysah asked. “So, cover up. Wear the hijab.” Rumaysah is in the inner circle of radical Muslim cleric Anjem Choudary. Both men were arrested in September on charges of inciting young British Muslims to engage in terrorism.

There are at least 500 U.K. citizens fighting in Syria and Iraq and every week, according to British police, another five recruits join the fight. British jihadis have been on the front lines with ISIS from the very beginning. In the group’s recent videos showing the executions of western hostages, the masked man holding the knife speaks with a London accent. The spike in western fighters may be in part due to this man, Anjem Choudary, a British-born lawyer turned Islamic preacher, who lives in London and has for years been asserting his democratic right to call for an end to democracy.

And the English government seems to be doing its best to aid and abet this Islamic takeover:

Anyone who criticises Sharia law or gay marriage could be branded an “extremist” under sweeping new powers planned by the Conservatives to combat terrorism, an alliance of leading atheists and Christians fear. Theresa May, the Home Secretary, unveiled plans last month for so-called Extremism Disruption Orders, which would allow judges to ban people deemed extremists from broadcasting, protesting in certain places or even posting messages on Facebook or Twitter without permission.

Hey, I am criticising sharia law right now. I guess I better stay away from England. Mind boggling. And even English men and women overseas can be in very real danger. Consider this:

A British-Iranian woman who was arrested in Iran after trying to attend a men’s volleyball match has been sentenced to one year in jail, local media says, quoting her lawyer. Ghoncheh Ghavami, a law graduate from London, was arrested in June at a Tehran stadium, where Iran’s national volleyball team was to play Italy. The 25-year-old went on trial last month.

Since we are speaking about women and Islam, this new headline also is most telling: “Study: 19 of 20 Worst Countries for Women Are Muslim-Majority Countries”. The story begins:

It’s official. According to the latest data, 19 of the 20 worst places in the world to be a woman are Muslim-majority countries. That’s too strong a correlation to be a coincidence. (Note: The only country in the top 20 that isn’t a Muslim-majority country is Ethiopia, where more than a third of the population is Muslim.) Meanwhile, Muslim organizations like CAIR continue to silence anyone who criticizes the treatment of women in Muslim lands, and gullible American “feminists” are converting to Islam.

Wow, what a mess. If these six examples of creeping sharia, stealth jihad and intolerant Islam don’t convince you of the way the West is dying while Islam is on the ascendency, I don’t know what will. England especially seems just about gone.

And even more tragic is that most Westerners and most Christians are sleeping through this whole thing. We really seem to deserve our fate.

11 Replies to “Englandistan and Western Self-Immolation”