While we may think we are invincible, and can live forever, death is the great leveller. Whether prince or pauper, we will all meet our end on this earth, and often it comes much quicker than we had expected. Every day we hear about another person who seems to have succumbed to an early and untimely death.

People meet an early end to life when they think they have ages to keep living. The examples are constantly in the news. Sadly there are plenty of such cases to choose from. Let me mention just one which I happened to come across in the press. One NSW sporting club has just lost two young people in two weeks:

There’s no rugby league club in Australia doing it tougher than the Thornton Beresfield Bears, after news filtered through on Saturday evening that a second teenage player from the club had died in less than a fortnight. Days after the death of Harry Hofman, 19, who died suddenly from a ruptured spleen at his Beresfield home near Newcastle on October 21, the club was made aware last night, on the eve of its presentation day, that another one of its own had died in tragic circumstances. Fifteen-year-old Jayden Morrissey, who attended Francis Greenway High School, was killed after being struck by lightning at One Mile Beach in Port Stephens while hanging out with two school friends.

What tragedy! These families must be grieving so very greatly now, and certainly need our prayers. But such stories can be multiplied many times over. We just don’t know when we will take our last breath. Such tragedies happen so often, that it seems no one is unaffected by all this.

We all know people who seem to pass away far too young. And this happens as much to Christians as to non-Christians. Scripture of course speaks to this truth. Paul tells us in Ephesians 5:16 for example that we are to redeem the time because the days are evil.

Other passages warn us to make good use of the time we have, as we never know when we simply will run out of it. As I am reading in John right now, I see how Jesus emphasised this about his own person. He said that people should make use of the time while he is around, because he would not always be here:

John 9:4-5 As long as it is day, we must do the works of him who sent me. Night is coming, when no one can work. While I am in the world, I am the light of the world.” 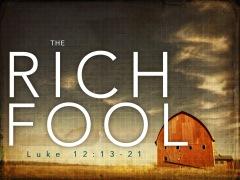 Of course later in John Jesus promises his disciples that he will not leave them as orphans, but will provide the Holy Spirit to continue his work in and through their lives. But in the above two passages Jesus warned that people should make the most of the time, while they still have the chance. Indeed, one of the most sobering and shocking stories Jesus ever told was the one about the Parable of the Rich Fool. In Luke 12:13-21 we find these words:

Someone in the crowd said to him, “Teacher, tell my brother to divide the inheritance with me.” Jesus replied, “Man, who appointed me a judge or an arbiter between you?” Then he said to them, “Watch out! Be on your guard against all kinds of greed; life does not consist in an abundance of possessions.” And he told them this parable: “The ground of a certain rich man yielded an abundant harvest. He thought to himself, ‘What shall I do? I have no place to store my crops.’ “Then he said, ‘This is what I’ll do. I will tear down my barns and build bigger ones, and there I will store my surplus grain. And I’ll say to myself, “You have plenty of grain laid up for many years. Take life easy; eat, drink and be merry.”’ “But God said to him, ‘You fool! This very night your life will be demanded from you. Then who will get what you have prepared for yourself?’ This is how it will be with whoever stores up things for themselves but is not rich toward God.”

Not only is this a very powerful warning, but Jesus minces no words here. “You fool” God says to the man. He was a fool to not consider things in the light of eternity. How many people live this way, fully sold out to things of this world, be it riches, or success, or power, or whatever.

They put so much thought, time and effort into worldly things, that they are fully unprepared for the next life. The lure of riches has a habit of doing this, and many people get caught out as a result. Philip Graham Ryken comments on this amazing passage:

This man was indeed a fool, but how many other fools are walking the streets today, only to be gone tomorrow? How many also seek to amass great fortunes for themselves, only to lose it all in an instant? As David Garland comments:

The man in the parable is a “fool” because he failed to use his possessions wisely and was oblivious to the certainty of death and its uncertain timing. He spent his last day alive selfishly planning for a long future. He was going to settle back and take it easy and enjoy the fruits of what he regarded as his bounty, not God’s. He was careful and astute when it came to preparing for his comfort and security in his life but careless and stupid when it came to preparing for his ultimate destiny with God.

Yes this man was a fool and headed to a lost eternity. But the sad truth is, how many Christians live like fools as well? How many Christians put all their attention, time and toil into getting all the material goodies they can, while holding God at arm’s distance?

How many foolishly think that after they have gotten all that they can get, and lived the good life, that they can then give God a few months or years of service? Well, it does not work that way. If we will not live for God now, what makes us think we will live for him later? Later we will be so enamoured with our riches and toys that God will be even more distant from us.

It really is incredible how often Jesus warned about riches and wealth, and about how we should be careful not to allow these things to choke us spiritually. And it is even more incredible how often Christians ignore these warnings altogether. That is the real tragedy of our time.

It is always horrific when a young person dies, and when someone in the prime of their life dies. But when a Christian dies unprepared to meet his maker, that is among the greatest of all tragedies. We all need to take stock and assess where we are at with our Lord.

None of us want to hear those words: “You fool! This very night your life will be demanded from you “.

5 Replies to “The Urgency of the Hour”