The problem with what we see every day in our news headlines is that a lot of terrible things are not just happening overseas. For example, the demonic horror of IS has a home grown element to it as well. What we find occurring in the Middle East is partly being fed by things happening here, and vice versa.

So we need to have the big picture in view here. Can it be that Western policies of multiculturalism – no matter how well-intentioned the people were who first introduced them – may have been in fact contributing to the worldwide issue of jihad and terrorism? 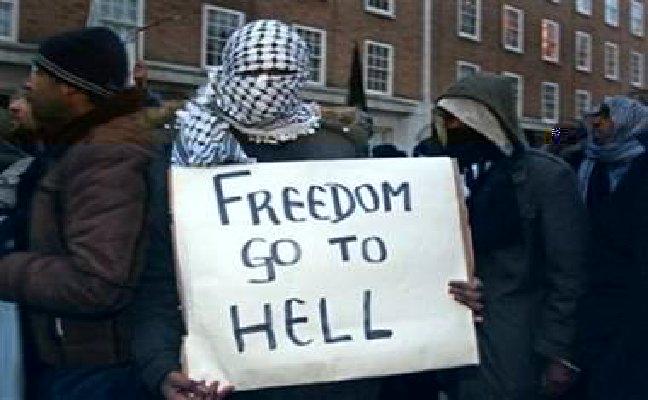 Have we allowed the spread of a violent, oppressive and anti-democratic political ideology because of our misplaced notions of tolerance and just getting along? Has our constant push for multiculturalism in fact been a recipe for disaster?

Consider a few recent episodes of the ‘religion of peace’ at work both here and overseas. They demonstrate how our failed policies at home are exacerbating problems overseas. The first concerns a mind-boggling video which has come to light, showing Australian children being indoctrinated in the fine art of jihad. As one report states:

Shocking video has emerged showing children as young as six spouting anti-Western rhetoric and waving Islamic extremist flags in Sydney, Foreign Minister Julie Bishop says. A Muslim youth group in the city’s southwest has been accused of indoctrinating young children after video surfaced from a performance in Lakemba last year. In the YouTube footage aired by the Seven Network, the four boys aged six to 13 wave flags, including the one used by Islamic State, and chant “You’re never too young to be a Soldier for Khilafa”. They call for US President Barack Obama to “go to Hell”, and say they want the head of Syrian President Bashar al-Assad.
Ms Bishop says children should be playing in their playgrounds with friends and “not being enlisted by irresponsible adults to an ideology that preaches hatred against the country in which they live”. The Muslim Youth Project reportedly has links to Hizb ut-Tahrir, the radical group recently labelled “un-Islamic” and “un-Australian” by Prime Minister Tony Abbott.

Undoubtedly this is not the only pro-jihad propaganda aimed at children in Australia. And it goes a long way towards explaining why so many Australian Muslims are heading overseas to fight with IS. We look for reasons why these youth might be getting radicalised. Um, I think the above episode makes it pretty clear why this is happening.

So now Australian security officials are revising upwards their estimates of how many overseas jihadists there are from Australia:

Security officials say there could be as many as 250 Australians fighting with or supporting Islamic State. The figure dwarfs the government’s most recent official tally of about 70 Australians in the conflict zone and another 100 at home supporting the Muslim extremist terrorists.
United Nations counter-terrorism expert Richard Barrett said Australian Secret Intelligence Service staff revealed the figure during a private meeting with other security and intelligence officials in April. Mr Barrett told the Herald Sun the Australian Government had revised its figures over time and while the numbers might change it was the risk each fighter posed when they got home which was the greatest concern.

These sorts of episodes are causing many to rethink their previous gung-ho support for multiculturalism. A recent lengthy article by Greg Sheridan is a case in point. He was once an avid fan of all things multicultural, as for example he wrote about in 1966:

There is nothing in multiculturalism that could cause any worry to any normal person. Multiculturalism officially promotes an overriding loyalty to Australia, respect for other people’s rights and Australian law, recognition of people’s cultural origins, respect for diversity, the need to make maximum economic use of the skills people bring to Australia and equity in access to government services.

Well, reality has a way of breaking onto our cloudy and rather deluded thinking, and the radical moves of stealth jihad in Australia has forced Sheridan to have a change of mind about these matters. So he writes about “How I lost my faith in multiculturalism”. He begins:

In 1993, my family and I moved into Belmore in southwest Sydney. It is the next suburb to Lakemba. When I first moved there I loved it. We bought a house just behind Belmore Sports Ground, in those days the home of my beloved Bulldogs rugby league team. Transport was great, 20 minutes to the city in the train, 20 minutes to the airport. On the other side of Belmore, away from Lakemba, there were lots of Chinese, plenty of Koreans, growing numbers of Indians, and on the Lakemba side lots of Lebanese and other Arabs.
That was an attraction, too. I like Middle Eastern food. I like Middle Eastern people. The suburb still had the remnants of its once big Greek community and a commanding Greek Orthodox church. But in the nearly 15 years we lived there the suburb changed, and much for the worse.
Three dynamics interacted in a noxious fashion: the growth of a macho, misogynist culture among young men that often found expression in extremely violent crime; a pervasive atmosphere of anti-social behaviour in the streets; and the simultaneous growth of Islamist extremism and jihadi culture. This is my story, our story and the story of a failed policy.

A senior policeman from nearby Bankstown once told me that policing in the Bankstown area was unlike working anywhere else in Australia, and he was amazed how much violent crime went unreported by the media. Does Islam itself have a role in these problems? The answer is complex and nuanced but it must be a qualified, and deeply reluctant, yes.
This is the only explanation consistent with the fact other immigrant communities, which may have experienced difficult circumstances in the first generation, don’t display the same characteristics in the second generation. But there is a deeper reason as well. As the great scholar of Islam, Bernard Lewis, has written: “The community of Islam was church and state in one, with the two indistinguishably interwoven.”
This isn’t just a theoretical observation. It means that imams at mosques tend to be preaching about politics, and doing so from a cosmology deeply influenced by paranoia and conspiracy. Many Australian Islamic institutions receive funding from Saudi Arabia, but I know from my work in Southeast Asia and Europe that the Saudis almost always fund an extremist interpretation of Islam. To have concerns about these matters is not racism or xenophobia. It is reasonable.
It may also be that when young men of Islamic background experience failure and alienation they are much more readily prone to entrepreneurs of identity who offer them purpose through the jihadi ideology, which has a large overlap with what they hear at the mosque and what they see on Arabic TV. This is simply not true for Buddhists or Confucians or Sikhs or Jews or Christians, and to pretend so, to make all religions seem equal, is to simply deny reality.

He notes how things have gotten so bad in Europe that a major turnaround is taking place:

In France, recent polls put National Front leader Marine Le Pen ahead of all other contenders for the French presidency. The National Front is a traditionally far-right extreme group, with an inheritance of anti-Semitism. It has recently ditched the anti-Semitism and now stands primarily against Muslim immigration and Islamic influence in France.
German Chancellor Angela Merkel said recently Germany’s attempt to create a multicultural society had failed completely. Britain’s Prime Minister David Cameron recently denounced European-style multiculturalism, saying: “We have encouraged different cultures to live separate lives, apart from each other and apart from the mainstream. We’ve failed to provide a vision of society to which they feel they want to belong. We’ve even tolerated these segregated communities behaving in ways that run completely counter to our values.”
France’s President Nicolas Sarkozy has agreed with Cameron and Merkel, that multiculturalism is a complete bust, as has Spain’s former leader, Jose Maria Aznar. Britain’s former prime minister Gordon Brown said shortly before he lost office that 75 per cent of terror plots in Britain came from Pakistan or had a direct Pakistani connection. There are 800,000 Pakistanis living in Britain.
Across Europe, anti-Muslim parties are gaining electoral strength. They are often described as anti-immigration parties but in truth they have little complaint about immigrants other than Muslim immigrants. Switzerland has banned minarets. Even Sweden has an anti-Islam party.
All this is happening in Europe, the most liberal continent on earth, in the face of furious opposition from the liberal elite, who regard it as racist and, worse, incipient fascism, leftover colonialism and every other kind of -ism you can imagine.

Well, here is one guy who gets it. And it is good to see many European leaders finally waking up as well. But we need many more Australian leaders to now do the same. Or do we need more videos of six-year-olds being taught the fine art of bloody jihad before they start to wake up?

19 Replies to “Multiculturalism and the Sharia Wars”