I used to be a radical secular lefty, so I know a bit about them. And even though I have now abandoned that position, I still keep a careful eye on what the secular left is up to. Hundreds of articles on this site provide documentation on what weird, diabolical and bizarre stuff they can promote and defend.

When you combine loopy leftism with diabolical misotheism, you seem to get every ugly agenda item available, whether pro-death activism, every sexual perversion in town, and all the nutjob causes you can imagine. And all these secular left attacks on decency and normality start to take their toll.

But as I have documented elsewhere, all this is not happening by accident. It is all nicely going to plan. Those who hate the West and its Judeo-Christian heritage have long been telling us how they plan to bring it all down. We call it cultural Marxism. See here for more on this: billmuehlenberg.com/2014/06/28/cultural-marxism/ 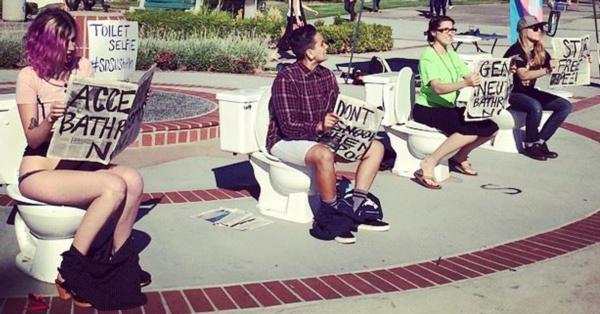 And the various causes these guys champion tells us a whole lot about where they are coming from, and what their value system is all about. The things they fight for tell us what they regard as important and essential. And given so many of their causes are completely nutzo, we can learn a lot about these folks real fast.

Consider the latest example of the high priorities of the secular left. Students at a California university had yet another protest (do they ever actually attend classes, or are they just fulltime agitators and protestors?). And you won’t believe what they are making a stink about (pun intended).

Well, they have organised a “Sh*t-in”. Yes, I kid you not. So there they are, sitting on toilets in the public to demand “non-gender inclusive bathrooms”. Yes you did read that right. They are doing public potty protests to speak up for the vitally important issue of our day: unisex toilets.

Forget about millions of people starving to death. Forget about the massacres and mass beheadings of IS. Forget about helping those lacking housing and basic amenities in life. Nope, we have something far more important to spend our time on: poo protests. And for some reason these guys want us to take them perfectly seriously.

One article on this opens as follows:

Students at San Diego State University (SDSU) hosted a “Sh*t-In” event last Tuesday morning to protest non-gender inclusive bathrooms. The event’s Facebook page says the goal is “to raise awareness and advocacy for Gender Neutral/ Gender non segregated bathrooms.”
“For trans* and gender nonconforming individuals, gender segregated bathrooms can be spaces where they are met with intimidation, harassment, run-ins with security, and/or violence,” the page description says. “These occurrences happen when people using the restroom police the gender of others based on binary assumptions and expectations of who men and women are and what they look like.”
According to SDSU’s #TuesdayTrivia, there are already more than 10 gender-neutral bathrooms on the campus as part of the university’s “commitment to diversity and inclusion.”
Meanwhile, queer and transgender organizations at the University of Oregon (UO) also protested traditional male-female bathrooms through a “ Gender Inclusive Bathroom Challenge,” where students pledged to boycott traditional campus bathrooms during Oct. 14-24.
“Having non-gender neutral bathrooms makes them (transgender and gender-fluid students) afraid and uncomfortable. It is not fair to that population of students to have to think about that on a daily basis,” Kayla Caddell, a student participating in the challenge told Daily Emerald, UO’s student newspaper. “It has checked my privilege in a way I didn’t expect it would.”
Elle Mallon, the Gender and Sexual Diversity advocate for Associated Students of OU (ASUO), led the challenge, alongside Maure Smith-Benanti, director of LGBT Education and Support Services. The pair hopes the challenge will combat the discrimination and discomfort facing non-conforming students.
“We find that restrooms and lockers rooms are the places where transgender people encounter aggression and micro-aggression,” Smith-Benanti told the Daily Emerald. “The most important thing is everyone needs a safe place to do their business.”

There you have it folks: poo PC is now all the rage, and this is something our enlightened students are telling us is of utmost necessity. Umm, in the old days, students might have worked to end slavery, or help get young men and women around the world to share the liberating message of Jesus Christ.

But today the one thing that matters is the ability to poo together with men and women. Yep, I can’t think of a more worthy campaign either. This is right up there with any other great activist cause of history. Isn’t it great to see how Western university students are turning out today.

If you ever wondered why the West is going down the gurgler fast, heading into the septic tank of history, well, now we know. Literally, in this case. And it really does stink.

20 Replies to “The Stinking Moonbat Agenda of the Secular Left”