Winston Churchill once said, “it is always exhilarating to be shot at without result.” As anyone involved in the culture wars knows, we are being shot at all the time. Not all the shots find their mark, and once in a while, they even backfire, returning to the shooters.

In the light of this, here is a simple truth: we either take a strong stand against the rising tide of anti-Christian bigotry, or we will lose it all as we are engulfed by it. If we simply acquiesce or fail to speak out, this will further embolden the Christophobes to ratchet up their attacks on faith and freedom.

And this is almost a universal truism. When aggression goes unchecked, it simply gets worse. Appeasement and compromise never help. The only way to properly stand against aggression is to meet it head on. As Churchill also said, WWII was a preventable war, but policies of appeasement insured that it would take place.

And it is the same today, with unprecedented attacks taking place against faith, family, and freedom. And every time we refuse to speak out and stand up for what is so very important, the other side simply ramps up the pressure and seeks to further silence us. 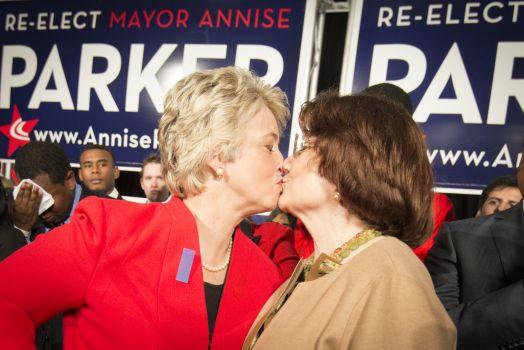 Thus it is so very vital that we always speak up and always take a stand for what is right. Passivity, silence and appeasement are not the answer. Having a bit of courage and commitment to what we believe in is the answer. A prime example of this concerns the blatant case of anti-Christian bigotry found in Houston, Texas.

I already spoke about this appalling case, in which a lesbian mayor declared war against Christianity: billmuehlenberg.com/2014/10/16/revealed-big-brother-is-a-homosexual-activist/

Well, people responded, thankfully. Instead of just remaining silent and being useless doormats, Christians rose up big time and let their voices be heard. And they took action as well. If this Chriostophobic mayor wanted to read their sermons, then that is what she will get. So people started sending in Bibles, sermons and Christian literature.

As one write-up states:

Houston Mayor Annise Parker has received a flood of Bibles — somewhere between 500 and 1,000 according to a spokesman for the mayor’s office — after the city subpoenaed the church sermons of five local faith leaders opposed to the Houston Equal Rights Ordinance, which the mayor signed in May.
“This is more dangerous than anything I’ve ever seen,” Glenn Beck said last week after interviewing one of the five subpoenaed religious leaders. “This is not about equal rights. … This is about shutting people down.” Steve Riggle, the pastor of Grace Community Church in Houston, told Beck that the city not only demanded his sermons, but anything he had said about Mayor Parker in 17 different forms of communication.
“People of faith are under attack,” Beck said. “Our churches and our institutions, our pastors, our preachers, our priests, our rabbis are under attack.” Beck, in addition to former Republican presidential candidate Mike Huckabee and Texas Senator Ted Cruz (R), encouraged Americans across the country to stand in support of the subpoenaed religious leaders by flooding the mayor’s office with religious texts. “Go find the best sermons you can find on religious liberty and send them to city hall in Houston,” Beck said.

And all this activism has paid off. Now the mayor has finally backed down. As a report by the Alliance Defending Freedom (ADF) states:

This is what happens when Christians stand together. Houston Mayor Annise Parker decided today to withdraw the subpoena of sermons and other communications belonging to five area pastors in a lawsuit in which the pastors are not even involved. The plight of the Houston 5 garnered nationwide attention and outrage from Americans who saw this as a clear infringement of these pastors’ First Amendment rights.
“The mayor really had no choice but to withdraw these subpoenas, which should never have been served in the first place,” explained Alliance Defending Freedom Senior Legal Counsel Erik Stanley. “The entire nation—voices from every point of the spectrum left to right—recognize the city’s action as a gross abuse of power. We are gratified that the First Amendment rights of the pastors have triumphed over government overreach and intimidation. The First Amendment protects the right of pastors to be free from government intimidation and coercion of this sort.”
The mayor’s decision comes just days before I Stand Sunday, a Houston rally for the five pastors that will be broadcast live on the Web, and Pulpit Freedom Houston, a national event encouraging pastors across America to stand in solidarity with the Houston 5 and their right to speak freely from the pulpit.
These events will still take place this Sunday, November 2, but even with the subpoena withdrawn, national participation in these events is just as important as ever. For one thing, Mayor Parker is still refusing to give the people of Houston the right to vote on whether or not to repeal Houston’s new HERO (Houston Equal Rights Ordinance) law, which requires public accommodations to allow access to facilities without considering gender – including public restrooms.

This is good news indeed, but as the ADF rightly notes, this is certainly not the end of the war, and plenty of battles are still underway. The haters of Christianity are certainly not going to just lay down and roll over because of this. They will simply redouble their efforts to forever silence the churches and render impotent the Christian faith.

Thus Christians need to be ever vigilant, and to constantly be aware of the attacks on their faith. And more importantly, they need to be involved in standing up for religious freedom. They dare not go back to sleep now that this one skirmish has been successfully dealt with.

There are thousands of other battle fronts which require our attention, and we dare not let our guard down. We have heard a thousand times now the famous quote of Edmund Burke, but it is always worth reposting: “All that is necessary for the triumph of evil is that good men do nothing.”

Let me finish with one more quote from Churchill. When most of England was foolishly going down the path of appeasement to Hitler, Churchill knew this was insanity, and strongly opted for the opposite course. At a meeting in the House of Commons on May 28, 1940, Churchill gave a speech to the full Cabinet in which he said:

I have thought carefully in these last days whether it was part of my duty to consider entering into negotiations with That Man. And I am convinced that every one of you would rise up and tear me down from my place if I were for one moment to contemplate parley or surrender. If this long island story of ours is to end at last, let it end only when each one of us lies choking in his own blood upon the ground.