In a widely publicised case, a 29-year-old American woman who found out she had brain cancer announced that she was going to take her life on November 1, 2014. The woman is an advocate for a euthanasia group, and has her own website devoted to her decision to take her life. She said that she “decided that death with dignity was the best option for me and my family”.

Upon learning about her terminal condition, Brittany and her husband moved to Oregon to take advantage of the state’s assisted suicide law. As one article notes, “Oregon is one of five states, along with New Mexico, Montana, Washington, and Vermont, that allow assisted suicide for terminally ill patients. Oregon’s Death with Dignity Act passed in 1997 and has allowed for 1,173 prescriptions, with 752 deaths resulting from access of the medication.” 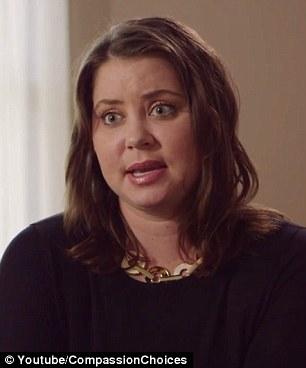 The case reignited the whole debate about euthanasia and assisted suicide, and many voices, pro and con, have entered the discussion. And reports are now saying that she may not go ahead with her plans, but wait and see how things progress.

So in a few days we will learn whether or not she follows up with her original decision. But many people who are also in similar difficult cases have been speaking out about this, telling Brittany and the world that suicide is not the way to go. Let me share a few of these with you.

The first one is mother of four Kara Tippetts who is also dying. She has even written a book about her experiences, The Hardest Peace. In a recent article she said this in part to Brittany:

Dear heart, we simply disagree. Suffering is not the absence of goodness, it is not the absence of beauty, but perhaps it can be the place where true beauty can be known. In your choosing your own death, you are robbing those that love you with the such tenderness, the opportunity of meeting you in your last moments and extending you love in your last breaths. As I sat on the bed of my young daughter praying for you, I wondered over the impossibility of understanding that one day the story of my young daughter will be made beautiful in her living because she witnessed my dying.
That last kiss, that last warm touch, that last breath matters—but it was never intended for us to decide when that last breath is breathed. Knowing Jesus, knowing that He understands my hard goodbye, He walks with me in my dying. My heart longs for you to know Him in your dying. Because in His dying, He protected my living. My living beyond this place. Brittany, when we trust Jesus to be the carrier, protecter and redeemer of our hearts, death is no longer dying. My heart longs for you to know this truth, this love, this forever living….
I would jump on a plane tomorrow to meet you and share the beautiful brokenness of my story and meet you in yours, if you would ever consider having me. I pray my words reach you. I pray they reach the multitudes who are looking at your story and believing the lie that suffering is a mistake, that dying isn’t to be braved, that choosing our death is the courageous story. No – hastening death was never what God intended. But in our dying, He does meet us with His beautiful grace.

Joni Eareckson Tada, a quadriplegic who has been wheelchair-bound for nearly half a century, also spoke to this case:

Like many, my heart broke when I recently watched Brittany Maynard’s video in which she outlined her plans to die through physician-assisted suicide. No one – absolutely no one – welcomes the pain that dealing with a terminal disease invariably brings, and it’s clear that this young woman is firm in her convictions. But if I could park my wheelchair beside her, I would tell her how the love of Jesus has sustained me through my chronic pain, quadriplegia and cancer. I don’t want her to wake up on the other side of her tombstone only to face a dark, grim existence without life and joy; that is, without God. There’s only one Person who has transformed the landscape of life-after-death, and that is Jesus, the One who conquered the grave and opened the path to life eternal. Three grams of Phenobarbital in the veins will only provide a temporary reprieve. It is not the answer for the most important passage of her life.
The hours are ticking away; please, Brittany, open your heart to the only One who can do something about your pain and your death. Life is the most irreplaceable and fundamental condition of the human experience, and I implore you to take a long, hard look at the consequences of your decision which is so fatal, and worst of all, so final.

Philip Johnson also has terminal brain cancer. This in part is what he wrote in response to Brittany:

Brittany’s story really hit home, as I was diagnosed with a very similar incurable brain cancer in 2008 at the age of twenty-four. After years of terrible headaches and misdiagnosis, my Grade III brain cancer (Anaplastic Astrocytoma) proved to be inoperable due to its location….
I will gradually lose control of my bodily functions at a young age, from paralysis to incontinence, and it is very likely that my mental faculties will also disappear and lead to confusion and hallucinations before my death. This terrifies me, but it does not make me any less of a person. My life means something to me, to God, and to my family and friends, and barring a miraculous recovery, it will continue to mean something long after I am paralyzed in a hospice bed. My family and friends love me for who I am, not just for the personality traits that will slowly slip away if this tumor progresses and takes my life….
Suffering is not worthless, and our lives are not our own to take. As humans we are relational – we relate to one another and the actions of one person affects others. Sadly, the concept of “redemptive suffering” – that human suffering united to the suffering of Jesus on the Cross for our salvation can benefit others – has often been ignored or lost in modern times. It is perfectly understandable that medication should be made available to give comfort and limit suffering as much as possible during the dying process, especially during a terminal illness, but it is impossible to avoid suffering altogether. We do not seek pain for its own sake, but our suffering can have great meaning if we try to join it to the Passion of Christ and offer it for the conversion or intentions of others. While often terrifying, the suffering and pain that we will all experience in our lives can be turned into something positive. This has been a very difficult task for me, but it is possible to achieve.

Not only are many people in similar conditions pleading with Brittany to reconsider, but others are pointing out the real agenda here, and what is behind all this. Wesley J. Smith highlights the sinister agenda and string-pulling at work in this case:

The Brittany Maynard media explosion is an intense advocacy offensive – funded substantially by the culturally subversive George Soros through his support of Compassion and Choices – that is intended to do two things:
1. Drive assisted suicide into implementation by the power of hyper-emotion.
2. Silence those who want to discuss non-lethal approaches to caring for terminally ill patients in the larger context of the issues raised by Maynard’s illness.
Thus, Maynard has unfairly attacked palliative care expert, Dr. Ira Byock, for daring to state that people with terminal brain cancer can die peaceful deaths without taking poison….
Maynard put herself into the international spotlight to push assisted suicide – and then uses her own tragedy as a bludgeon to shame anyone who gainsays the agenda into silence. Well, baloney: Nobody is violating Maynard’s privacy. To the contrary: She and C & C are inserting her story into every possible venue. That being so, people have every right to comment about the ISSUE presented – and that includes what hospice can do for people with brain cancer – as well as whether assisted suicide is appropriate or beneficent public policy.
People also have every right to opine about whether she is doing the right thing in her campaign and in deciding to take poison. She brought the issue up. To put it bluntly, whether to legalize physician-prescribed suicide is about much more than Brittany Maynard’s individual circumstances, as tragic and emotionally compelling as that may be.

It is always tragic when anyone suffers, and when a young life is cut short. It is even more tragic when such suffering is exploited by cynical pro-death groups for their own deadly purposes.

9 Replies to “Brittany Maynard and Suicide”