Today it seems that theology is as popular for Christians as a ham sandwich is for Muslims. Most Christians avoid it like the plague. The surrounding culture says that the main thing is to feel good and be happy, so clueless Christians follow suit.

Who needs sound doctrine when you can just have a good time? Why bother with pesky things like theology and dogma when all we hear from the pulpits is that we can be happy and have our ‘best life now’? After all, we are told that ‘doctrine divides’ and we all just need to get along. 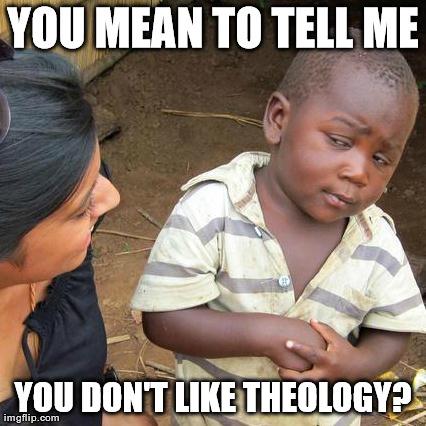 Things like the emerging church movement have not helped, adopting the postmodernist spin on things, claiming that only relationships matter, not old-fashioned things like theology. So a world which disdains truth and eschews a sure word has filtered into the churches, and we now act just like pagans do in this regard.

And it shows – big time. A recent survey conducted by Ligonier Ministries in the US examined just how theologically informed Americans are. The results of “The State of Theology” survey are quite revealing, and demonstrate how little of a role theology now plays. The study breaks down responses according to whether a person is a non-Christian, an evangelical, and other options.

The report begins with this Executive Summary:

Ligonier Ministries is “committed to faithfully presenting the unvarnished truth of Scripture to help people grow in their knowledge of God and His holiness.” Anecdotal evidence has shown an increasing lack of theological understanding in America, both outside and inside the church. Ligonier Ministries wanted to understand with accuracy the extent of the need to improve that understanding.
Ligonier Ministries commissioned a research study by LifeWay Research to measure the theological awareness of adult Americans. Ligonier Ministries identified specific doctrines and heresies that they wanted to test. LifeWay Research helped refine these questions and to conduct a survey of 3,000 Americans. Questions focused on seven key doctrinal areas and included a number of specific areas where Americans differ from historic and orthodox views.

The Summary continues by looking at these key areas. It says this about “Beliefs about God”:

While the majority of Americans believe God is perfect, the answers reveal that Americans want God on their own terms. Some results reflect healthy thinking, but many of the results show the lack of orthodox thinking about God. This is especially true of questions related to the Trinity. 1-in-5 Americans deny that Jesus is the God-man. One third of Americans think the Father is more divine than the Son. The member of the Trinity that is the least understood in the United States is the Holy Spirit. Nearly two thirds (63%) think the Holy Spirit is a force and not a person.

The first link below gives a handy brief overview of the survey’s findings. If you want much more detail, the full 26-page report is found in the second link. So let me look at these findings in more detail. First let me look at some of the quantitative findings on ethical and social issues:

The church should be silent on issues of politics
Agree strongly 22%
Agree somewhat 21%
Disagree somewhat 24%
Disagree strongly 23%
Not sure 11%
Non-Christians (36%) are more likely to Strongly Agree than Self-identified Evangelicals who attend church Once a month or more (8%) and Other Christians (17%). Evangelicals (40%) are more likely to Strongly Disagree than Black Protestants (27%), Catholics (19%), and Mainlines (16%).

Some of the theological findings include:

Salvation is found through Jesus Christ alone
Agree strongly 35%
Agree somewhat 18%
Disagree somewhat 17%
Disagree strongly 18%
Not sure 12%
Self-identified Evangelicals who attend church Once a month or more (87%) are more likely to Strongly Agree than Other Christians (33%) and Non-Christians (13%). Evangelicals (3%) are less likely to Strongly Disagree than Black Protestants (8%), Catholics (18%), and Mainlines (14%).

As is pretty clear from these results, evangelicals are among the best when it comes to adhering to basic biblical doctrines and ethical positions. But even there we find many who do not. America as a whole has lost its biblical bearings, while evangelicals are doing better, but they too are weakening in key areas.

We expect a largely secular culture to not affirm basic biblical doctrines, but when so many Christians of various stripes also seem to struggle with these basic beliefs, then you know we are in trouble. Let me finish with the thoughts of three great Christians on this issue:

“If you do not listen to theology, that will not mean that you have no ideas about God. It will mean that you will have a lot of wrong ones.” C.S. Lewis

“Why do you balk at the doctrine of the Trinity – God the three in One – yet meekly acquiesce when Einstein tells you E=MC2?… I admit, you can practice Christianity without knowing much theology, just as you can drive a car without knowing much about internal combustion. But when something breaks down in the car, you go humbly to the man who understands the works; whereas if something goes wrong with religion, you merely throw the works away and tell the theologian he is a liar.” Dorothy Sayers

“Bad theology dishonors God and hurts people. Churches that sever the root of truth may flourish for a season, but they will wither eventually or turn into something besides a Christian church.” John Piper

11 Replies to “Whither Theology?”