All over the West we are inundated with apologists for Islam, who are either completely deceived about the real nature of the political ideology, or are deliberately lying to push the Islamic agenda for whatever reason. And the enemies of freedom and democracy absolutely love it when these stooges do their work for them. The examples of this are legion.

I am aware of one group which used to be strongly Christian and conservative. But today it is one of the biggest dhimmi groups in town, doing all it can to shrill for Islam. It even prints their stuff in full, without a word of critical commentary. Thus it informs its readers that Islam is a religion of peace, is not involved in violence, has no coercion in religion, and respects freedom and democracy. Yeah right. 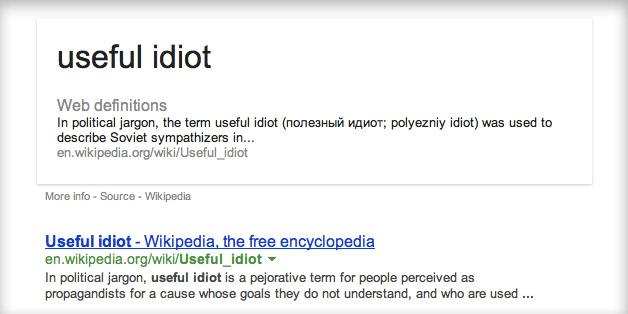 Lenin of course referred to foolish and gullible dupes in the West who did their bidding as useful idiots. Today we have the same appalling situation with useful idiots in the West pushing Islam while the Muslim activists sit back and laugh at such stupidity and gullibility.

And the amazing thing is, these Westerners who are acting as apologists for Islam overwhelmingly have never read the Koran, the hadith, the sira, and so on. They know nothing about Islam, yet they push it as if they were Muslims themselves.

And just as incredible, while we have these dhimmi Westerners lying about Islam, we have people living in Islamic countries willing to risk everything to tell us the truth about Islam. Many people who actually know what Islam is all about (they live there for heaven’s sake) are doing all they can to alert the West.

But so many of their very important warnings are falling on deaf ears. We have so many clueless wonders in the West barking up Muhammad’s tree, that these warnings are too often ignored or dismissed. Well, I will keep sharing these vitally-necessary warnings as long as I can.

Along with many ex-Muslims who have fled to the free West, we have those still living in Muslim-majority nations sending out the alarm. Let me highlight just one here. Uzay Bulut is a Turkish journalist based in Ankara who has just penned a must-read article, “The West’s Dangerous Enchantment with Islam”.

Everyone needs to read this piece in full, but let me offer parts of it to whet your appetite. Dealing especially with the treatment of women in Islam, he looks at a number of cheap excuses many Westerners will cough up to defend Islam – what he calls “Excuses for Abuses”. He writes:

To make a positive change in Muslim countries, we need to be able to speak openly and tell the (too-often criminalized) truth about what Islamic teachings and traditions actually contain. Yet in Muslim countries, it is impossible to speak openly about what is in these Islamic teachings and traditions, without putting one’s life at risk. There is a situation even more frightening. It now seems to be difficult to speak openly about fundamentalist Islam even in Western countries, in part thanks to the dangerous enchantment of Western progressives and feminists who romanticize Islamism. Women in the Muslim world desperately need the voice of Western progressives and feminists.

Here is one such excuse:

Criticizing Islam is racist and reveals “intolerance,” “bigotry” and “Islamophobia.”
For the record, Islam is not a race. Moreover, if you discuss the violent and misogynous teachings of Islam, it does not mean that you hate or are intolerant of Muslims, just of violence and misogyny. It does mean that you care about Muslim women; that you do not want them to be forced to find four male “witnesses” to “prove” they have been raped, or to be punished by Islamic courts as adulterers if their rapists do not confess. It means you believe that their testimony in court, or their inheritance, should be valued as highly as a man’s; that you do not want them to be the victim of honor killings or child marriages at the hands of their Muslim family members, and that you do not want their husbands to be able to beat them with impunity.

“Injustices against women take place all around the world, not just against Muslims or in Muslim countries.”
If the oppression of women is rooted in the culture, shouldn’t one be asking, ‘what makes a culture that misogynous?’ What is progressivism if its objectives do not include helping emancipate women from Islamic oppression, such as honor killings, child marriages, stonings, flogging and punishing rape victims (while releasing rapists) – all of which are employed in the Muslim world, in line with Islamic teachings, allegedly to “protect” and “respect” women and to keep them “pure,” but more probably to keep women in their place?

“What you are seeing is not the real Islam; Islam has been hijacked.”
The problem with this view is that Islam actually does teach that a woman is worth less than a man. Many teachings in Islam are misogynous – from wearing veils; requiring four male witnesses to prove rape; issues of inheritance; court testimony; rules of marriage; rules of divorce and remarriage; a man’s “right” to marry up to four women and then beat them, and so on. If Western progressives and feminists care at all about their Muslim sisters, they need to protest against the actual roots of this injustice: these Islamic teachings.

“Not all Muslims are the same. There are good and bad Muslims, just as there are good and bad people in all religions.”
First of all, thank you very much for this genius discovery. But how can it help reduce the Islamic violence around the world? Of course it is true that there are many good Muslims, whose values do not follow Islamic teachings verbatim, but also include humanitarian values. They do not wage war on other religions or try to bring them under submission to Islam. In the eyes of jihadis or Islamists, however, who live by the harshest interpretation of most doctrinaire Islamic teachings, such a quality makes them “bad Muslims.”

What Western progressives and feminists are doing for the sake of political correctness – or a well intentioned, if misguided, “multiculturalism” – does nothing to help Muslim women. On the contrary, “political correctness,” silence, or making excuses for atrocities caused by Islam, can only add to the suffering of women in the Muslim world. If progressives truly want to protect Muslims, they cannot achieve this goal by “protecting” Islam from criticism. If one is called “racist” or “Islamophobe,” the answer is that these are accusations bullies always use to silence people who disagree with them. The real Islamophobes are those who degrade, abuse and kill their fellow Muslims. The worst thing any Western progressive or feminist can do in the face of the suffering caused by Islamic teachings, is to stay silent.

I wish a lot more clueless wonders in the West would take heed of what people like Bulut are saying. It would make things so much better, not just for women, but for all of us. Pray that his warnings do not keep falling on deaf ears.

5 Replies to “When the West Lies About Islam”