As I am reading again through the book of Acts, one thing that has struck me is just how much of a continuation we find between it and the four gospel accounts. That is, everything we find happening and being said in the gospels is also found in Acts.

This of course should not be surprising. As Luke states in Acts 1:1-2, “In my former book, Theophilus, I wrote about all that Jesus began to do and to teach until the day he was taken up to heaven, after giving instructions through the Holy Spirit to the apostles he had chosen.” So what we find in Acts is really just a continuation of what Jesus did and taught in the gospels. 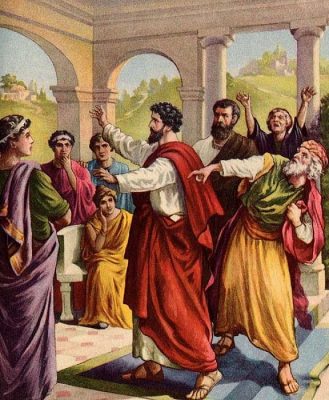 So we find the same themes, the same emphases, the same occurrences. Thus if we find Jesus stirring up trouble, causing controversy, dividing the crowds, and provoking strong reactions, we find the very same things in Acts. Wherever the disciples went, things got real interesting, to say the least. Let me offer just some of the passages on this:

Acts 2:12-13 Amazed and perplexed, they asked one another, “What does this mean?” Some, however, made fun of them and said, “They have had too much wine.”
Acts 2:37 “When the people heard this, they were cut to the heart and said to Peter and the other apostles, ‘Brothers, what shall we do?’”
Acts 4:1-4 The priests and the captain of the temple guard and the Sadducees came up to Peter and John while they were speaking to the people. They were greatly disturbed because the apostles were teaching the people, proclaiming in Jesus the resurrection of the dead. They seized Peter and John and, because it was evening, they put them in jail until the next day. But many who heard the message believed; so the number of men who believed grew to about five thousand.
Acts 7:54-55 When the members of the Sanhedrin heard this, they were furious and gnashed their teeth at him. But Stephen, full of the Holy Spirit, looked up to heaven
Acts 9:23-24 After many days had gone by, there was a conspiracy among the Jews to kill him, but Saul learned of their plan. Day and night they kept close watch on the city gates in order to kill him.
Acts 9:29 He talked and debated with the Hellenistic Jews, but they tried to kill him.
Acts 13:49-51 The word of the Lord spread through the whole region. But the Jewish leaders incited the God-fearing women of high standing and the leading men of the city. They stirred up persecution against Paul and Barnabas, and expelled them from their region. So they shook the dust off their feet as a warning to them and went to Iconium.
Acts 14:1-4 At Iconium Paul and Barnabas went as usual into the Jewish synagogue. There they spoke so effectively that a great number of Jews and Greeks believed. But the Jews who refused to believe stirred up the other Gentiles and poisoned their minds against the brothers. So Paul and Barnabas spent considerable time there, speaking boldly for the Lord, who confirmed the message of his grace by enabling them to perform signs and wonders. The people of the city were divided; some sided with the Jews, others with the apostles.
Acts 16:19-21 When her owners realized that their hope of making money was gone, they seized Paul and Silas and dragged them into the marketplace to face the authorities. They brought them before the magistrates and said, “These men are Jews, and are throwing our city into an uproar by advocating customs unlawful for us Romans to accept or practice.”
Acts 16:39 Philippians leaders ask Paul and Silas to get out of town.
Acts 17:4-6 Some of the Jews were persuaded and joined Paul and Silas, as did a large number of God-fearing Greeks and quite a few prominent women. But other Jews were jealous; so they rounded up some bad characters from the marketplace, formed a mob and started a riot in the city. They rushed to Jason’s house in search of Paul and Silas in order to bring them out to the crowd. But when they did not find them, they dragged Jason and some other believers before the city officials, shouting: “These men who have caused trouble all over the world have now come here”.
Acts 19 Paul causes a riot in Ephesus.
Acts 23:7 When he said this, a dispute broke out between the Pharisees and the Sadducees, and the assembly was divided.
Acts 24:5 We have found this man to be a troublemaker, stirring up riots among the Jews all over the world. He is a ringleader of the Nazarene sect
Acts 28:22-25 “But we want to hear what your views are, for we know that people everywhere are talking against this sect.”They arranged to meet Paul on a certain day, and came in even larger numbers to the place where he was staying. He witnessed to them from morning till evening, explaining about the kingdom of God, and from the Law of Moses and from the Prophets he tried to persuade them about Jesus. Some were convinced by what he said, but others would not believe. They disagreed among themselves and began to leave after Paul had made this final statement: “The Holy Spirit spoke the truth to your ancestors when he said through Isaiah the prophet.”

As you can see, the disciples never failed to rock the boat, upset the masses, cause divisions, and spark controversy and mayhem. If that was the standard response to the early disciples and their ministry, perhaps we ought to be asking ourselves what sort of response we are getting.

Moreover, just like John the Baptist and Jesus, the early disciples preached repentance. Repentance was their major theme, along with warning about wrath to come. Recall that Jesus often spoke about repentance, and he spoke far more about hell than heaven. The early disciples did the same. In fact, not once did the disciples include the love of God in their preaching. It was always a call to repentance, and to flee the wrath to come. Here are a few examples:

Acts 2:37-38 When the people heard this, they were cut to the heart and said to Peter and the other apostles, “Brothers, what shall we do?” Peter replied, “Repent and be baptized, every one of you, in the name of Jesus Christ for the forgiveness of your sins. And you will receive the gift of the Holy Spirit.
Acts 3:19 Repent, then, and turn to God, so that your sins may be wiped out, that times of refreshing may come from the Lord,
Acts 3:26 When God raised up his servant, he sent him first to you to bless you by turning each of you from your wicked ways.”
Acts 5:31 God exalted him to his own right hand as Prince and Savior that he might bring Israel to repentance and forgive their sins.
Acts 8:22 Repent of this wickedness and pray to the Lord in the hope that he may forgive you for having such a thought in your heart.
Acts 11:18 When they heard this, they had no further objections and praised God, saying, “So then, even to Gentiles God has granted repentance that leads to life.”
Acts 13:24 Before the coming of Jesus, John preached repentance and baptism to all the people of Israel.
Acts 17:30 In the past God overlooked such ignorance, but now he commands all people everywhere to repent.
Acts 19:4 Paul said, “John’s baptism was a baptism of repentance. He told the people to believe in the one coming after him, that is, in Jesus.”
Acts 20:21 I have declared to both Jews and Greeks that they must turn to God in repentance and have faith in our Lord Jesus.
Acts 24:25 As Paul talked about righteousness, self-control and the judgment to come, Felix was afraid and said, “That’s enough for now! You may leave. When I find it convenient, I will send for you.”
Acts 26:20 First to those in Damascus, then to those in Jerusalem and in all Judea, and then to the Gentiles, I preached that they should repent and turn to God and demonstrate their repentance by their deeds.

Everywhere in this book we find the preaching of repentance and turning from sin. This was the apostolic message. So how does our message compare today? Do we preach sin, judgment and repentance like John the Baptist, Jesus and the disciples did? Or do we think we can improve upon their message by omitting these essential biblical themes?

All these hard words of Jesus and the disciples of course provoked opposition, anger, hardship and persecution. Jesus promised that this would be the case. And we find the same thing in Acts. Here are just some passages on this:

Acts 5:41 The apostles left the Sanhedrin, rejoicing because they had been counted worthy of suffering disgrace for the Name.
Acts 9:4 He fell to the ground and heard a voice say to him, “Saul, Saul, why do you persecute me?”
Acts 9:15-16 But the Lord said to Ananias, “Go! This man is my chosen instrument to carry my name before the Gentiles and their kings and before the people of Israel. I will show him how much he must suffer for my name.”
Acts 12:1-3 It was about this time that King Herod arrested some who belonged to the church, intending to persecute them. He had James, the brother of John, put to death with the sword. When he saw that this pleased the Jews, he proceeded to seize Peter also. This happened during the Feast of Unleavened Bread.
Acts 14:22 We must through many hardships enter the kingdom of God.

So, is a clear picture beginning to emerge here? The disciples continued in the words and teachings of Jesus. And because they did, they were persecuted, attacked, hated and abused. They never preached a false gospel of God loving and accepting everyone just as they are. They preached a serious gospel of repentance and renouncing sin.

I for one want to preach what Jesus and the disciples preached. If that makes me unpopular, an outcast, and the subject of criticism by sugar-sweet Christians, then so be it. When I stand before Jesus one day, I will not be judged according to what the men-pleasers say and do, but by God Almighty.

It is time to get back to Jesus and the New Testament disciples. Two quotes by Leonard Ravenhill will suffice to conclude this piece:

“If Jesus had preached the same message that ministers preach today, He would never have been crucified.”

“The early church was married to poverty, prisons and persecutions. Today, the church is married to prosperity, personality, and popularity.”

7 Replies to “Time to Get Back to New Testament Christianity”