Yes, I know: the church wins, at least in the end. The real church of Jesus Christ will ultimately triumph, because Jesus has risen from the grave, and he promises us a final victory. But as Augustine rightly said, the church in this world is always a mixed body (corpus permixtum).

There are true believers and professing believers. The former he referred to as the church invisible, and the latter, the church visible. As Jesus taught in the parable of the tares (Matthew 13:24-30), the wheat and the tares will grow up together, so there will always be an admixture of the true and the false, the real Christians and the ones in name only. 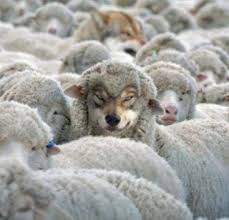 So of course I refer to the church visible here. The church in the world is in a terrible shape, and often the real problem lies not with our many external enemies and threats, but internal ones. I refer to utterly clueless and biblically illiterate Christians who keep siding with our enemies, and stand against their own faith.

They will come out attacking Christians, while defending every anti-Christian agenda going around. Thus they will side with the homosexual lobby, or with Islam, or with secular humanists, and actually attack Christians who are seeking to take a stand in these areas.

Thus the church becomes its own worst enemy – or at least big parts of it are. And I encounter this on a regular basis because of the work that I do. So let me remind you once again: if you want to live a quiet and peaceful life, don’t do what I do – don’t defend the faith and promote truth in the public arena. It will just make lots of enemies – including those calling themselves Christians.

Let me offer another example of this. Yesterday I wrote a piece on a dhimmi Cathedral in Washington DC which actually invited Muslims in to hold a worship service there. Thankfully one aware and bold Christian woman knew this was just not on, so she got up and proclaimed Jesus Christ as Lord.

For that she was thrown out of the church! I said she was a hero and we need more Holy Ghost-filled believers like her. Has this church not heard of the First Commandment for heaven’s sake? Does it not realise that a Christian worship service will never be held in a mosque? These ‘Christian’ leaders are blind guides leading the blind.

My write-up on this is here: billmuehlenberg.com/2014/11/15/away-with-you-spineless-christian-men/

But for daring to post this article in various places, all hell broke loose. Christians got real angry and upset. At the dhimmis and apostates in this church? No, at me. They went ballistic, siding with the Muslims and accusing me of all the usual nonsense: you are judgmental, bigoted, a hater, etc.

Let me offer just a few of their charges. One guy took me to task, saying the Muslims were invited there, and this woman “was out of line” to do this at the service! She was out of line? To proclaim Jesus Christ at a Christian house of worship was out of line, while worshipping a pagan god was not? Puh-leeese, spare me.

I replied, “So Jesus was out of line to clean God’s house? The prophets were out of line to demand purity in the temple? The disciples were wrong to object to foreign gods?” I am utterly shocked at so many mentally and spiritually impoverished people who claim to be Christians.

Then other num nums chimed in, defending the church and the Muslims, while condemning the woman! I said to them that they were being completely clueless here. Islam is totally opposed to everything Christianity believes in, and they are massacring millions of Christians around the world. They would never allow Christian worship services in a mosque, and we should not stand for this anti-Christ religion being allowed to do its thing in the church of Jesus Christ.

Unfortunately these chaps were either not very bright or not very willing to actually stay with the debate, since they kept throwing up some red herrings and non-sequiturs. One was this: “So Jesus didn’t die for their sins?” Um, what does that have to do with anything?

We are talking about creeping sharia and the Islamic invasion of our Christian churches, and this guy throws out this completely irrelevant howler. Of course he died for everyone. So what? He died for drug dealers for example, but that does not mean anyone in their right mind would be happy with having a shooting gallery set up right next to their home.

He died for paedophiles, but should we then allow them to freely hang around schools and other places with young children because Jesus died for everyone? With such sloppy and careless thinking, no wonder the church is in a mess. But he had more lulus to offer, such as: “None are righteous, no, not one.”

Umm, duh, you might as well tell me the sun rises in the east. Once again, what does this have to do with the discussion at hand? Of course no one is righteous – that goes without saying. But in the mind of this terribly confused Christian, he wants to offer a phony moral equivalence here: yeah, Muslims might do bad things, but so does everyone.

That is as helpful as saying that since the Allies were not fully righteous in God’s eyes, they had no right to take on Hitler and the Nazis and seek to prevent them taking over the whole world. Duh. Let my people think is the cry of the hour. I sure wish they would start soon.

On another page things got even worse, with obvious trolls coming out in force. One guy who has been a serial pest at one site, attacking me every time I opened my mouth, was at it again. And amazingly, his remarks were a classic example of the very thing I spoke about in my article: the flood of girlie men in the pews who never speak out about anything, except those who try to raise the alarm.

As just one example, consider this incredible load of PC moonbattery: “This is an exceptionally controversial article that seeks to promote intolerance, conflict and judgement. I would recommend it be removed from this group unless we start becoming a platform for hate groups and fear mongering.”

Wow, he was demanding the admins pull my piece, because it is hateful and full of fear mongering! This is the exact sort of thing I get from atheists, secular humanists, homosexuals, etc., all the time. Instead of debating the issues, they launch into ad hominem attacks.

I fully expect pagans to come up with these sorts of brainless and patently false charges. But when people who claim to be Christians cough up this silliness, then you know something is amiss. Oh, and what did the admins do? Did they take this troll and troublemaker to task?

Um, no. They deleted my post and banned me from their site! Yes you heard me right. This is supposed to be a Christian site, yet each time I sought to speak a bit of biblical truth there, they pulled my posts. And then they censored me for good by banning me.

Hmm, that is a great Christian website. That is a great example of WWJD. And by the way, the troll is still there I am told. So he remains, but I am viewed as the enemy, and punished accordingly. Go figure. Gotta love how some Christians think and operate.

As I say, no wonder the church is losing. Who cares about all those external threats and attacks on the church. We are doing just a peachy job ourselves of destroying the church from within. Wow, with friends like these, who needs enemies.

19 Replies to “This is Why the Church Is Losing”