I have said this before, and I will keep saying it until I see some real changes taking place around here: Where are all the godly, courageous men of faith? Why do they seem to be an endangered species? Why is it that whenever some crisis comes up that demands Christian action and bravery, it is Christian women who lead the charge?

Praise God for these fearless and totally committed Christian women. But I sure wish we had some Christian men to join their ranks. I am ashamed to be a Christian male to be honest, when so often I see courageous women standing up and being counted, while all the pansy girly-men cower behind their skirts.

Enough already! We need some men with backbone – men with some Holy Ghost boldness to take back what the devil has stolen. Enough of all these wimps for Jesus and spineless wonders. Now more than ever we need real men – real Christian men – to stand, to fight, and to do valiantly for our God.

My reason for writing this is because once again, the church of Jesus Christ is under direct Satanic attack, and it takes a brave Christian woman to make a godly stance. Where are all the Christian men? I speak to your shame! Stop all this cowardliness and start acting like soldiers of Jesus Christ.

This episode has to do with the National Cathedral in Washington DC which lost its marbles, and thought it would be a neat idea to have Muslims come in and hold an Islamic prayer service there. The folks in charge there are simply duped dhimmis, and haven’t a clue what this signifies. 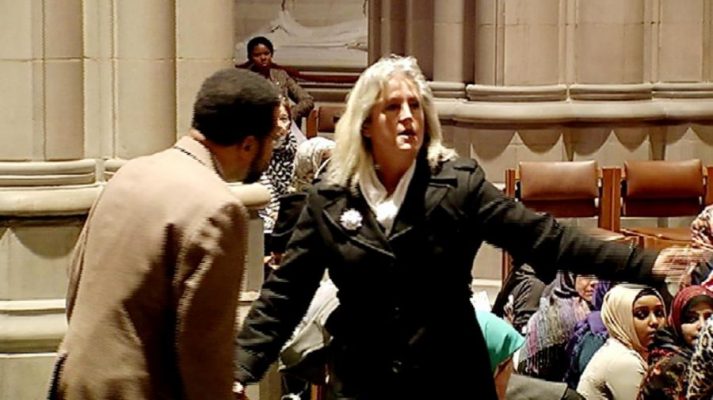 The prayers of course take place in Arabic, so these brainless Christians would not know what was being prayed. These interfaith fools do not have a clue as to what they are allowing to happen in their own Christian houses of worship.

Do they not know anything about Islam? Do they know nothing about the Shahada, one of the pillars of Islam? It is a prayer that professes there is only one God (Allah) and that Muhammad is his messenger. This is a direct, unilateral assault on the very heart and soul of the Christian faith: that Jesus Christ is God’s son, and the only way to the Father.

So these blind dhimmis are going to allow pagan gods into God’s sanctuary. The word of God is clear on this. As Yahweh clearly proclaims: “I will not share my glory with another” (Isaiah 42:8; 48:11). How can these people even claim to be followers of Jesus Christ and allow this desecration of God’s house?

Well one brave Christian woman refused to just sit by and do nothing. She went in there and fearlessly proclaimed Christian truth. “Jesus Christ is our Lord and Saviour” she boldly proclaimed. And she was thrown out of this Christian church for daring to say this! Go Figure.

A five minute video clip discussing her informs us that her name is Christine. That is all I know about her so far, but I certainly want to know more. What a champion. What a hero. So where are all the men? Why does it always take a wonderful Christian woman to speak the truth of Jesus Christ so courageously?

Remember earlier this year the same thing happened in a church in Germany. Muslims were leading their demonic religious worship there, when a brave Christian woman, Heidi Mund stood up to proclaim Jesus Christ and his Lordship. She too was chucked out of the church! I discuss this here: billmuehlenberg.com/2014/02/08/one-brave-christian-woman-contra-mundum/

And this Washington church has allowed Muslim extremists to sponsor this whole sordid affair, including Hamas and the Muslim Brotherhood. As Robert Spencer explains, the Koran makes it clear what it thinks about Christians. He offers a number of suras about this, then says:

In light of all that, and the ongoing and escalating Muslim persecution of Christians worldwide, wouldn’t it have been more appropriate, so as to promote love, respect and understanding and all that, to have Christian prayers in a mosque? After all, it is Muslims who are persecuting Christians worldwide, and the National Cathedral decides to show its good will and love for Muslims by inviting Hamas-linked Muslim Brotherhood front groups to pray there. Why doesn’t the ADAMS Center [a leading Islamic mosque in Washington] show its good will and love for Christians by inviting Christians to pray in the mosque there?

Yes exactly right. Why is it always just one way traffic here? Duped Christians invite Muslims in to their churches all the time based on some foolish ideas of interfaith harmony. But when was the last time a Christian was allowed to pray and lead a Christian worship service in a mosque?

But what upsets me even more than this rank apostasy by so many deceived Christian leaders, is the absence of godly men who will fearlessly stand up for Jesus in crunch times. Why do we always seem to get Holy Ghost-empowered women fighting the good fight, while all these craven weenies just sit at home and watch Top Gear?

And by the look of it, that means Christian males will have a lot of work to do to catch up to all those godly women warriors who are so far ahead of them.

Go Christine. Go Heidi. I salute you, and I apologise that there are so few righteous men who will stand with you in this hour of need.

53 Replies to “Away With You Spineless Christian Men”