One of the great ironies of life is just how much atheists talk about heaven and hell – things they vehemently deny that even exist. Of course this is not so surprising, since atheists also spend inordinate amounts of time talking about and railing against God – whom they also insist does not exist.

They seem awfully obsessed with God and the afterlife. The more they deny the existence of both, the more they seem to make it clear that deep down they may be not all that sure. They will not admit to such doubts of course, but one keeps being reminded of the line from Shakespeare, which I paraphrase, ‘The atheist doth protest too much, methinks’. 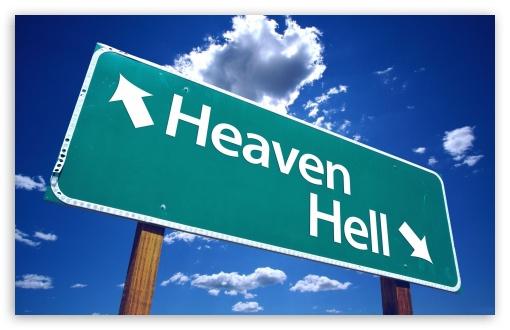 But as long as they keep rambling on about God and the next world, I guess I am entitled to do the same, especially since I happen to believe in both. So let me simply mention what one rather representative atheist said to me recently on another post.

It was a discussion of how some Christians understand hell, and he wrote in with this comment: “Give me hell any day. At least the company will be better. An eternity spent in the presence of a bunch of self-righteous Christians is my idea of hell.”

This is an oft-heard statement from our atheist buddies. It is rather common, and is hardly a new way of thinking of course; we had similar thoughts expressed 400 years ago in Milton’s Paradise Lost where Satan says, “Better to reign in Hell than serve in Heaven”.

My reply to this fellow was this:

Thanks, but as atheist Jean-Paul Sartre observed, “Hell is other people”. The essence of sin is selfishness and total self-obsession. So hell will be populated not by pals and buddies enjoying each other’s company, but by angry, self-centred people who will hate each other. Not a good place to be.
And of course you misunderstand heaven as well. It is filled with sinners who knew full well that they had no righteousness of their own, and cast themselves on God’s great mercy, receiving the righteousness of Christ in the transaction. So there will not be one self-righteous person in heaven. They will all be in hell.

Let me tease this out a bit more. Sin as I say is all about self. Love, community, fellowship and comradery – the sorts of things we will find in heaven – are of course the opposite of selfishness and self-centredness. Giving, caring, loving and serving others, focusing outwardly instead of on self: these are the things of great relationships on earth, and the stuff of heaven.

But looking out for number one, insisting on your own rights, seeing others as a threat to self – these are the things of social discord and friction on earth, and the sum and substance of hell. So there will be no neat party scenes in hell with rebels celebrating together.

Instead it will be every man for himself, with everyone at each other’s throats. It will be a hellish experience indeed. Heaven of course will be the exact opposite. Sacrificial love characterises the work of Christ on earth, making real loving fellowship possible. That will be in good part what heaven is all about. Heaven really is other people.

So he constantly sided against it, reserving some of his strongest denunciations for it. Now there can of course be professing Christians who exhibit unlovely and unwanted self-righteousness. Some of these are merely nominal Christians.

But genuine disciples of Christ can of course display this as well, sadly. They are on a journey, seeking to become like Christ, and are hopefully moving away from self-righteousness in any form. So we can apologise ahead of time for such un-Christlike behaviour.

But we must remind the non-Christian that ultimately it is Christ they must look to. Christians can and will disappoint, although this is not meant to be a copout. When we sin – in terms of self-righteousness or anything else – it is wrong, and we must repent and move on.

At the end of the day, the atheist cannot use less than perfect Christians as an excuse for his rebellion and refusal to bow the knee to his Creator. Yes, believers must do all they can so that such excuses become less and less, but at the end of the day, those who reject God will not get off the hook because of the sometimes poor representation of Christianity by Christians.

It is God whom they are fully responsible to, and it is not the shortcomings of Christians that God will hold us to account, but to his own perfection and righteousness. We will all be judged by the standard of perfection – by God himself.

Since therefore atheists are thinking and talking so much about God and heaven and hell, at least think and talk in the proper and biblical way. A few quotes – as always – from C. S. Lewis will help round off this discussion. The first comes from The Problem of Pain:

“To enter heaven is to become more human than you ever succeeded in being on earth; to enter hell, is to be banished from humanity.”

And these two are taken from The Great Divorce:

“Son, he said, ye cannot in your present state understand eternity…That is what mortals misunderstand. They say of some temporal suffering, ‘No future bliss can make up for it,’ not knowing that Heaven, once attained, will work backwards and turn even that agony into a glory. And of some sinful pleasure they say ‘Let me have but this and I’ll take the consequences’: little dreaming how damnation will spread back and back into their past and contaminate the pleasure of the sin. Both processes begin even before death. The good man’s past begins to change so that his forgiven sins and remembered sorrows take on the quality of Heaven: the bad man’s past already conforms to his badness and is filled only with dreariness. And that is why…the Blessed will say ‘We have never lived anywhere except in Heaven,’ and the Lost, ‘We were always in Hell.’ And both will speak truly’.”

12 Replies to “Atheists and the Afterlife”