In a recent article I discussed the growing trend of Christians leaving church (mainly in America), while still remaining followers of Jesus. They have found other ways to fellowship and grow together with other Christians, but they are basically “done” with church.

That article obviously touched a raw nerve, with over 200 comments and well over 10,000 likes. As I had to say in a comment, “I of course nowhere in this article said that it was necessarily a good thing that people are leaving church (but not Christ). I merely pointed out the reality of this situation, and suggested a few reasons as to why this might be the case. I also clearly said that we must pray for our pastors and leaders. And of course I did mention Heb. 10:25 and the need to have some sort of regular fellowship.”

That article can be found here: billmuehlenberg.com/2014/12/26/on-leaving-church/

Many of the comments found there demonstrate that there is a lack of clarity as to just what exactly the church means, and how it relates to, but differs from, the body of Christ, the Kingdom of God, and so on. Given that entire libraries have been filled seeking to discuss such issues, I certainly did not attempt that there – nor will I here. 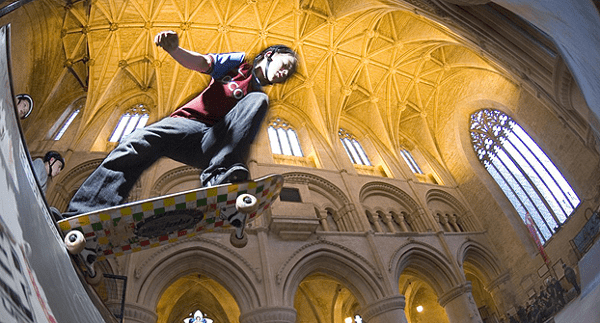 Thus this article must be seen in the same light. I am not trying here to offer detailed pros or cons of the de-churching of Europe. Christianity, as we know, can thrive even with empty church buildings. However, it is still a matter of some concern that the once cradle of Christianity in the world is now all but an empty shell. Let me offer some details on this by presenting the opening paragraphs of a recent article:

Two dozen scruffy skateboarders launched perilous jumps in a soaring old church building here on a recent night, watched over by a mosaic likeness of Jesus and a solemn array of stone saints. This is the Arnhem Skate Hall, an uneasy reincarnation of the Church of St. Joseph, which once rang with the prayers of nearly 1,000 worshipers.
It is one of hundreds of churches, closed or threatened by plunging membership, that pose a question for communities, and even governments, across Western Europe: What to do with once-holy, now-empty buildings that increasingly mark the countryside from Britain to Denmark?
The Skate Hall may not last long. The once-stately church is streaked with water damage and badly needs repair; the city sends the skaters tax bills; and the Roman Catholic Church, which still owns the building, is trying to sell it at a price they can’t afford.
“We’re in no-man’s-land,” says Collin Versteegh, the youthful 46-year-old who runs the operation, rolling cigarettes between denouncing local politicians. “We have no room to maneuver anywhere.” The Skate Hall’s plight is replicated across a continent that long nurtured Christianity but is becoming relentlessly secular.
The closing of Europe’s churches reflects the rapid weakening of the faith in Europe, a phenomenon that is painful to both worshipers and others who see religion as a unifying factor in a disparate society. “In these little towns, you have a cafe, a church and a few houses—and that is the village,” says Lilian Grootswagers, an activist who fought to save the church in her Dutch town. “If the church is abandoned, we will have a huge change in our country.”
Trends for other religions in Europe haven’t matched those for Christianity. Orthodox Judaism, which is predominant in Europe, has held relatively steady. Islam, meanwhile, has grown amid immigration from Muslim countries in Africa and the Middle East. The number of Muslims in Europe grew from about 4.1% of the total European population in 1990 to about 6% in 2010, and it is projected to reach 8%, or 58 million people, by 2030, according to Washington’s Pew Research Center.

A number of things can be mentioned here. One is the mass secularisation of Europe and how a once mighty continent has fallen. Europe at one time was the centre of gravity for world Christianity, but today it is our most pagan land and our greatest mission field.

And of course spiritual vacuums will always be quickly filled. Secular humanism cannot do the job, so we see Islam filling the void – big time. This is in large measure because of faulty immigration and multiculturalism policies. But people will always reach out for some sort of spirituality, even if it is a false and barbaric one like Islam.

When I was in Europe and England last year, I was often asked what my spiritual prognosis was for these places. My reply usually went something like this: “I suspect that in the near term it will likely get worse. But God is a God of the long term, and should Christ tarry, things may get better in the long haul. But much of that will depend on God’s people, and what they do with the time given them.”

Things are looking very grim indeed in the UK and Europe, but God never leaves himself without a witness. I have seen that firsthand, having been a missionary to Europe some 35 years ago. Things looked very black back then, but a later visit demonstrated that God is still at work.

When I lived in Holland in the early 80s things were about as low as you could go in terms of biblical Christianity. But a 2009 visit surprised me and greatly encouraged me as I learned about what God was still doing in that nation. I have told that story elsewhere, but let me share a bit of it here:

It is the revitalisation of the church in the nation that is especially intriguing. There are now numerous evangelical churches in Holland with large and thriving congregations. One church in Amsterdam has over 2000 members. Such numbers were unheard of a few decades ago.
And the amazing thing is, many of these large and spiritually vital churches are led by migrants who have come to Holland. The large Amsterdam church has as its head pastor an African. Indeed, many of these big churches are being led by Nigerians and Ghanaians.
Missionaries and church planters from places such as South Korea, Brazil and Uganda are doing great works for God in the Netherlands and throughout Europe. Indeed, when I was staying at a Youth With a Mission base in Amsterdam just the other week, a large South Korean disciple training school was in full swing.

So the Christian faith has gone full circle over the centuries. Europe was once a missionary-sending continent, reaching out to the rest of the world. Now people from the developing world are returning the favour, and re-evangelising a very dark and secular Europe. God is still at work.

Nonetheless, the article I link to here about Europe’s empty churches is still so very shocking in so many ways. Seeing once great churches now becoming mere skateboard parks really does show in graphic fashion just how far down the gurgler the church in Europe has gone.

How God must grieve over a once great land which is now so very far from Him. But God has not abandoned Europe, and Christian workers from around the world are there, seeking to once again see God glorified as the gospel is shared and disciples are made.

We may again see so many lives changed that nations will again be transformed, just as we saw so long ago. May it be so Lord. And show us what role we might play in making this a reality.

19 Replies to “Europe and the Decline of the Church”