Islam in Europe is a huge problem, and getting worse by the day. If all Muslims coming to the West readily accepted and embraced our core values and beliefs, we would have no problem. But many do not, and want instead to spread sharia law and Islamist totalitarianism wherever they go. 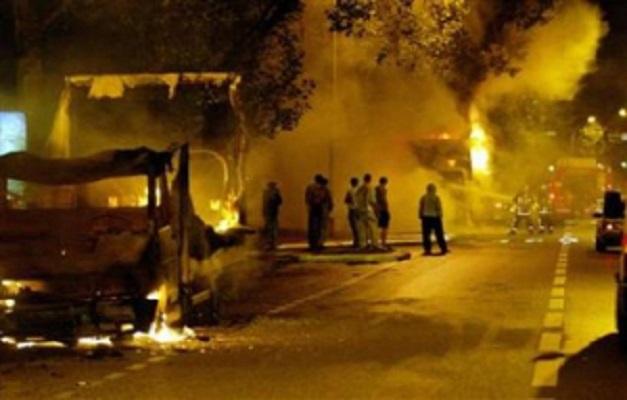 The nation of France knows this all too well. With around 10 per cent of the population Muslim, there are almost daily horror stories coming out of this land. What is happening there should serve as a warning and a wakeup call to the rest of the West.

Let me begin with a more general piece on this, and work my way up to more recent and more specific examples. Back in April a sobering article appeared with this title: “Native French under Attack in Muslim Areas”. It begins:

Violent crime can happen anywhere and to anyone and for many reasons, but in Muslim-controlled parts of France, it has become especially dangerous to be white. Surveillance camera video shows white French being beaten up by predominantly Muslim immigrant gangs in the Metro and on the street. Islamic immigrants consider it their territory and whites enter at their own risk. The French call them “sensitive urban zones” – no-go zones where the police don’t enter or don’t enforce the law.
Some call them little Muslim caliphates inside the borders of France. “And it’s like that because these parts of the country are in the hands of drug traffickers, gangs and imams [Islamic leaders],” French commentator Guy Milliere explained. A French report says almost 1 in 5 French have been victims of racist insults or worse. A few cases have even gone to trial.
“Some of those who launch racist attacks on whites use Islam as the reason they do it. They may not even speak Arabic, but they still use Islam as a ‘flag,'” Tarik Yildiz, a French sociologist, said. Yildiz, author of the book, Anti-White Racism, is not native French but is the son of Turkish immigrants. “My book is viewed as politically incorrect and breaks a taboo: the idea that immigrants could oppress whites,” Yildez said.

As the French Left’s grand experiment in multiculturalism goes up in flames, some quarters of French society are dividing into tribalism and ethnic identity. At a Paris café, CBN News discussed the problem with anti-Islamization activists Pierre Cassen, of the website Riposte Laique, and Christine Tasin of Résistance Républicaine.
“The French people are increasingly living in fear. They fear the imposition of Islamic law and the organized violence against any French person, including the police,” Cassen said. “More and more Islamists threaten riots, assault, and try to impose Sharia (Islamic law). They attack the police,” Tasin added. “The republic is in danger,” Tasin warned.

Another piece describes what is happening in just one French city. Consider this shocking headline: “Marseilles, France: 40% Muslim and the Most Dangerous City in Europe”. The article commences:

France is probably the worst affected of all western nations by immigration, since it is on the brink of losing its European identity to the insistent Muslims increasing in numbers within French borders. As they grow in population, they come to believe they can impose the will of Islam on the French people, and when they don’t get their way, they often resort to violence.
A number of extraordinary stories have come out of Marseilles in recent weeks. Collectively, they attest to the fact that the city is sinking rapidly into the third world. It has been massively colonised by Muslims, and they are now reproducing there the conditions found in their home countries.
The first bizarre incident to make the headlines was a Wild West-style train robbery. Shopping carts, rocks and bits of metal had been placed across a railway track, forcing a passenger train to stop. A cargo train arrived some time later and found its way barred by the passenger train. Around 20 hooded jeunes (youths) [this is the code the French elite use for Muslims, much like ‘Asian’ in the British media] then appeared, broke into the cargo train and made off with some of the boxes it contained. According to the news reports about the incident, this was not the first time it had happened.
In September 2011, at between 4 and 5 am, around 15 people “apparently in a state of drunkenness” broke into the barracks belonging to a military fire service, shouted at the firemen on duty there then began firing shots at them. 7 firemen were wounded, of whom 4 were taken to hospital. The party of “jeunes” had apparently come from a bus chartered by a group of Cape Verdians in Nice to travel to an “Africa night” in Marseilles.
A week later, a bus driver was attacked by passengers when he refused to allow two burka-clad women to travel on his bus. It is illegal in France to wear the burka in public. When one of the women tried to board the bus, displaying a bus pass bearing a photograph, the driver insisted that she unveil so he could verify her identity. She refused to do this and, after some discussion, decided to leave and wait for the next bus.

And just this week we had two more Islamic jihad attacks. The first goes like this:

A man armed with a knife entered a police station in central France on Saturday in a likely attempt to harm officers. He stabbed and wounded three police officers while shouting “Allahu Akbar.” Local security forces shot him to death on the scene in Joué-lès-Tours, the largest suburb of Tours.
Close to 2 pm local time (3 pm Jerusalem time), the suspect entered the police station and stabbed a policewoman in her face, and attempted to stab two other officers. A source familiar with the investigation told AFP that before he was shot to death by the local forces, he yelled the Takbir in Arabic.

And shortly thereafter, this story:

Eleven people have been injured after a man drove into pedestrians in the French city of Dijon, shouting “Allahu Akbar” (God is Great). Reports said the suspect was heard yelling that he was “acting for the children of Palestine”.

What I have reported here is just the tip of the iceberg. It seems that Islam is out of control in France, as it is in so much of Europe and the UK. Thankfully there is the occasional good news story, such as this one which just surfaced:

A French woman who protested a temporary tent-abattoir set up in a car-park near a hospital to ritually slaughter animals for Eid has had her conviction overturned, after she appealed a €4,500 fine and three month jail sentence for calling Islam a “cesspit”.
Retired school-teacher Christine Tasin, 58, was convicted under an 1881 law after the prosecution argued criticism of Islam was the equivalent of inciting violence against Muslims, and that in addition to the normal punishment of a fine and imprisonment, Tasin should also be stripped of the right to hold public office.
Her subsequent appeal was supported by Dr. Daniel Pipes’ American-based Legal Project, an advisory and funding body established to “protect the right in the West to freely discuss Islam, radical Islam, terrorism, and terrorist funding”, who have also backed Dutch Freedom Party leader Geert Wilders after his prosecution for criticising Islam.
Overturning the conviction last week, the court confirmed that Islamophobia and blasphemy was not a crime in France, despite the claims made by some Muslim groups after her initial conviction in August.
Speaking exclusively to Breitbart London, Tasin said of the verdict: “Last Thursday was a great day for freedom of expression in France.

That is good news indeed, but hardly offsets all the creeping sharia and stealth jihad occurring in this nation. The only other thing that can be a plus here is if other Western nations take heed to what is happening there, and seek to avoid the mistakes made in France.

Whether the rest of the West will pay attention and embrace the warnings remains to be seen however. Let us pray that it does – and very soon.

10 Replies to “France, Sharia and Jihad”