Are atheists capable of anything new and original, or do they just imitate, ape, and copy from the very thing they despise so much? I still await something original from these folks. Of course this is all fully understandable. Atheists would not even exist if it were not for God. The very air they breathe is God’s air.

So the God they deny and rail against must also exist. There can be no atheists if there is no God. And all their thoughts and ideas and values are also the product of being made in God’s image. They can’t even speak of morality, apart from God.

It is only because a moral God has created a moral universe with creatures in his image that we can even speak of good and evil. So everything about atheists and atheism is derivative. They cannot even come up with one original thought. All they do is take from God and twist and turn things.

They are so obsessed with the God they claim is non-existent that they mimic everything about him. They hate Christianity yet copy it to the letter. Thus we even have atheist church services! Held on Sundays no less! I have written about this elsewhere: billmuehlenberg.com/2013/11/25/our-atheist-churches/ 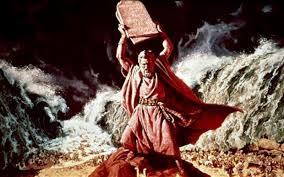 They of course have their high priests and holy books, their sacred rituals and obligations, and so on. Talk about the most unoriginal bunch of rebels around. And now they even have their own ‘Atheist Ten Commandments’. So do we simply laugh at this foolishness, or fall asleep with boredom?

And of course none of this is new anyway. Back in 2006 Richard Dawkins in his book The God Delusion did exactly the same thing: coming up with a new set of commandments. Actually he simply copied a set which he “happened to find on an atheist website”. He then suggested four more commandments he might add to such a list.

So this latest attempt is more copying and more pale imitation. These atheists copy Dawkins who copied some other atheists who copied God. These guys are unable to generate one original idea it seems. Yet arrogant atheists like Dawkins describe themselves as “Brights”. Yeah right.

Consider one of the earlier commandments that Dawkins ran with: “Treat your fellow human beings, your fellow living things, and the world in general with love, honesty, faithfulness and respect”. Of course this is a bit rich coming from a guy who had spent 400 pages attacking the overwhelming majority of mankind (those who do not share his reductionist atheism).

One write-up of the new set says this:

Atheists have written their own version of the ten commandments. These commandments were chosen from submissions to Atheist Mind Humanist Heart’s (AMHH) Re-Think Prize, a crowdsourcing project.
Previously reported by the Inquisitr, in November Adam Savage announced he would be a judge in the ReThink Project, the host of MythBusters (one of only two, these days), caused a new surge of interest and awareness for the contest — so much that the contest website crashed shortly after his tweet.
As part of the crowdsourcing project, submissions were submitted to Atheist Mind Humanist Heart’s website. The submissions for new commandments were reviewed by the contest judges — Adam Savage was one of 13 judges — and ten submissions were chosen that were deemed worthy of being called commandments. The ten writers of the chosen submissions split a prize of 10,000 dollars.

And their Ten Commandments?

Be open-minded and be willing to alter your beliefs with new evidence.
Strive to understand what is most likely to be true, not to believe what you wish to be true.
The scientific method is the most reliable way of understanding the natural world.
Every person has the right to control over their body.
God is not necessary to be a good person or to live a full and meaningful life.
Be mindful of the consequences of all your actions and recognize that you must take responsibility for them.
Treat others as you would want them to treat you, and can reasonably expect them to want to be treated. Think about their perspective.
We have the responsibility to consider others, including future generations.
There is no one right way to live.
Leave the world a better place than you found it.

Oh puh-leeese. A total of 2,800 submissions, and this is the best they could come up with? Sorry, but I will take the original any day of the week. All these guys prove here is that atheism is bereft of any worthwhile ideas, and any that get even close to being worthwhile are simply borrowed shamelessly from the God they despise so much. Brights indeed!

Consider this ground-breaking commandment of theirs: “Treat others as you would want them to treat you, and can reasonably expect them to want to be treated. Think about their perspective”. Um, sorry, but I think someone beat you to it. The Son of God actually ran with that one 2,000 years ago!

Try Luke 6:31 for starters: “Treat others the same way you want them to treat you.” You gotta laugh. These rebels hate God so much that they think they have to reinvent morality. But all they end up doing is confirming the reality and wisdom of the very God they claim does not exist.

Let’s check out a few more of these doosies. Their first one says this: “Be open-minded and be willing to alter your beliefs with new evidence.” Um, do they really believe that? Of course they don’t. Millions of atheists and agnostics have followed the evidence wherever it may lead, and embraced theism, and often biblical Christianity.

Yet for their troubles, they are roundly denounced as traitors by the hardcore atheist brigade. A classic example of this was the world-famous atheist Antony Flew. He was a far more important figure in the atheist universe than Dawkins ever was, yet when he started to follow the evidence, all hell broke loose.

He left atheism and embraced theism when the evidence led him in that direction. Flew had made it a lifelong habit to follow the command of Plato attributed to Socrates, “We must follow the argument wherever it leads”. And the scientific evidence forced him to conclude that “the universe was brought into existence by an infinite Intelligence”. I discuss him and review his book here: billmuehlenberg.com/2007/11/21/a-review-of-there-is-a-god-by-antony-flew/

And it seems that it is the atheists, with their predetermined worldview, that are at war with evidence, and with science itself. Consider the recent incredible outburst by atheist Sam Harris. He took some vicious pot-shots at Christian scientist Francis Collins.

Collins of course is a world-renowned geneticist and leader of the Human Genome Project. He is also the director of the National Institutes of Health in Bethesda, Maryland. But because he dares to believe in God, bully boy Harris says he is dangerous, calling him a “Bible-thumper”.

He goes on to say that the work of celebrated Christian physicist John Polkinghorne is “just pure madness”. So much for a high view of science (their next commandment) and following the evidence impartially and doggedly. Scientism, not science, is what these angry atheists worship.

Consider also this commandment: “Be mindful of the consequences of all your actions and recognize that you must take responsibility for them.” But Dawkins and Co insist that we are mere gene replicators. How do such impersonal and amoral objects ever get to be responsible? Where does that come from in the materialistic world of atheism?

Personal responsibility cannot of course exist without free will. But the God-haters insist that there is no such thing. As atheist biologist Will Provine put it, “No God. No life after death. No free will. No ultimate meaning in life and no ultimate foundation for ethics.”

And Dawkins himself tells us this about morality: “Whenever natural selection favors a gene because of its beneficial effect in youth – say, on sexual attractiveness in a young male – there is likely to be a downside: some particular disease in middle or old age, for example. . . . . To return to this chapter’s pessimistic beginning, when the utility function – that which is being maximized – is DNA survival, this is not a recipe for happiness. So long as DNA is passed on, it does not matter who or what gets hurt in the process. . . . Genes don’t care about suffering, because they don’t care about anything.”

Finally, consider this one: “There is no one right way to live.” Um, really. So if I think it is right to live as a Christian, you guys are OK with that? But given how hate-filled they are with Christians, I guess they don’t really mean this at all. Indeed, they think there is only one way to live: as a reductionist atheist. Nothing else is viable.

So much for the ten commandments of the misotheists. Sorry, but I would much rather run with the real deal. You remember the original set? It includes the commandment about not bearing false witness. That is something the atheists need to take to heart.