The West has degenerated to such an extent that those who have sworn to destroy it are protected, promoted and paraded, while those who seek to defend it are persecuted, penalised and prosecuted. That of course is a recipe for national suicide, and we see this constantly being played out all around the Western world.

The recent jihad attack in Sydney by a devout Muslim was just the latest example of this. But there are plenty more to choose from. One longstanding freedom fighter is again being hounded by the authorities for daring to speak a bit of truth about the political ideology known as Islam. 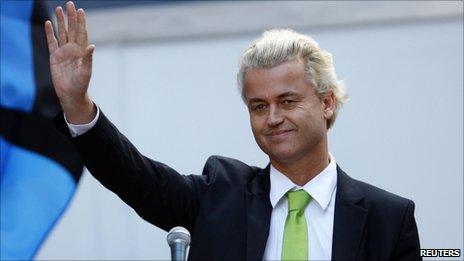 Geert Wilders had been taken to courts before for his willingness to stand up for freedom and democracy, and to critique the enemies of the West. And he has paid the price for this, living under 24/7 security. Several years ago I and some others had lunch with Wilders, the Dutch MP.

He was surrounded by security guards. Everywhere he goes he must have this protection, all because of the “religion of peace”. But for his efforts the Dutch authorities think that he is somehow the bad guy. And he is being targeted again. As one news report states:

Dutch far-right politician Geert Wilders is due to be prosecuted over allegations he incited racial hatred against Moroccans, the authorities say. The charges stem from an incident in which Mr Wilders led an anti-Moroccan chant during a speech in March. The Dutch public prosecutor later received more than 6,400 complaints. Mr Wilders, who leads the Party for Freedom (PVV), has often expressed his distaste for Islam and mass immigration. In response to the prosecution, Mr Wilders described the charges in a statement as “a travesty”.
“The public prosecutor would do better to devote his time to prosecuting jihadis instead of me,” he said. Mr Wilders made his comments during a political meeting in The Hague. Asking supporters in a cafe if they wanted fewer Moroccans in the country, some responded by chanting “Fewer! Fewer! Fewer!” The politician then replied: “I will fix it for you.”

One positive thing out of all this – the article goes on to say that “The PVV is currently topping the opinions polls in the Netherlands.” Indeed, throughout much of Europe people are beginning to wake up to the very real threat that Islam is to their way of life.

Just recently in Germany some 15,000 citizens marched against the Islamisation of Europe. People have had enough of those who come to their lands, refuse to blend in, refuse to embrace the host culture’s values, and instead seek to transform the West into sharia strongholds.

“Hate Speech” was invented in the Kremlin of the USSR by political operatives who saw that it could be used effectively against anyone who did not agree with you, whom you wanted to silence. It would seem indispensable for all people who want to defend their liberty to take a stand against criminal and violent people who aim to destroy or damage their societies. If those people are extremist Muslims, why should they be exempt? And if they are not extremist Muslims, why should they not be protected from the same threats and violence that menace us?
Ironically, however, it is not the violent Islamic teachings inspiring these crimes that are questioned, criticized – or prosecuted – as hate speech on major media outlets or among political circles. It is, instead, the victims of these teachings: among others, Ayaan Hirsi Ali, Lars Hedegaard, Susanne Winter, Elisabeth Sabaditsch-Wolff, Imran Firasat, and Geert Wilders.
What Geert Wilders does cannot be called hate speech. It is a legitimate struggle, if occasionally imperfect, to protect the liberties of all of us in the face of unending threats and attacks, most recently from Islamic extremists. Geert Wilders is not an extremist of any kind. He is a democrat who defends Western values, the most important of which are liberty and life. We should not prosecute Wilders. We should thank him for sacrificing his life to defend us – and defend him back.

What a week. In an Australian café, a self-declared jihadi seized at least 17 hostages, two of whom were killed; and in Pakistan, 148 people, including 132 children, were massacred by the same branch of the Taliban that tried to murder Mala Yousafzai to prevent her from being educated.
Whether the terrorist in Australia acted alone or had an organization behind him is irrelevant. It did not stop him from killing two hostages. The manager of the Lindt cafe, 34-year-old Tori Johnson, and a 38-year-old lawyer and mother of three, Katrina Dawson, lost their lives.
What we have in both slaughters are individuals motivated by the same ideology, Islamism, and committing attacks against innocent civilians. More alarming is that many people apparently seem not to want to talk about the motivations, apart from mental illness, behind both attacks: Islamic ideology. Perhaps they fear being exposed to the same violence one day, or perhaps they fear jeopardizing business deals or votes. There may also be the temptation to run away from reality, in the hope that the more you deny it, the farther you are from it.

In a recent speech in the US Wilders mentions his current legal situation:

Three years ago, I was taken to court on hate crime charges. After a grueling court case, that lasted almost two years, I was fully acquitted. Now, the Dutch judiciary is going after me again. I am said to have insulted a population group because I asked people whether they want more or fewer Moroccans in the Netherlands.
Moroccans are the major Islamic group in the Netherlands. They are overrepresented in crime and welfare statistics. 65 percent of Moroccans between 12 and 23 are suspect of a crime. Moroccans account for 75% of all the Dutch who leave for Syria to wage jihad. Nobody wants more Moroccans in the Netherlands.
My party – which by the way is the largest or at least the second largest party in the polls – wants to restrict the number of Moroccans in three ways: by stopping immigration from Islamic countries, by sending back all convicted Moroccan criminals to their country of origin, and by stimulating voluntary re-emigration. They intend to prosecute me again. They want me to stop telling the truth about Islam. However, I will never be silenced. Not by jihadis, not by political opponents, and not by anybody. “Live free or die” – that is my motto.

But perhaps you think Wilders is a bit extreme, and we can simply discount what he has to say. Well, one person we should not ignore is Amel Shimoun Nona, the Chaldean Catholic archbishop of Mosul, Iraq, who is now living in exile in Kurdistan Iraq.

He has warned that his diocese is now run by radical Muslims and that Western democratic principles mean nothing there. He said this:

You think all men are equal, but that is not true: Islam does not say that all men are equal. Your values are not their values. If you do not understand this soon enough, you will become the victims of the enemy you have welcomed in your home.
Our sufferings today are the prelude of those that you, Europeans and Western Christians, will also suffer in the near future. I lost my diocese. The physical setting of my apostolate has been occupied by Islamic radicals who want us converted or dead. But my community is still alive.
Please, try to understand us. Your liberal and democratic principles are worth nothing here. You must consider again our reality in the Middle East, because you are welcoming in your countries an ever growing number of Muslims. Also, you are in danger. You must take strong and courageous decisions, even at the cost of contradicting your principles.

That is a very powerful and sobering warning. So are those by Wilders, Ali and others. But the question is, are these warnings just falling on deaf ears? Will we wake up and start defending our values and way of life, or will we allow it all to be lost?

10 Replies to “Wilders, Jihad, and the War Against Freedom”